Moorefield is an incorporated town located on Highway 69 midway between Sulphur Rock (Independence County) and Batesville (Independence County). A railroad and farming town, it is named for Jesse Alison Moore, the most prominent landowner in the community at the time the post office was established in the 1880s.

Jesse A. Moore was born in Jefferson County, Tennessee, in 1840. He came to Ruddell Hill (Independence County) shortly after the Civil War and married Elizabeth Jane Moore, who may have been a distant cousin. They moved to Gainsboro (Independence County), where she lived. He became a prominent farmer in Big Bottom along the banks of the Black and White rivers. Moore was a member of the Masonic fraternity and held the office of Worshipful Master. During the hectic days of Reconstruction, he was elected to the Arkansas General Assembly in 1873. Because of the political maneuvering of his opponents, however, he was not allowed to take his seat.

The post office at Moorefield was established in 1883, with Moore appointed the first postmaster. The post office sprang up along the tracks of the St. Louis, Iron Mountain and Southern Railroad when a small depot was built.

Moore died in 1904 and is buried with his wife at Rehobeth Cemetery in Moorefield. Their eldest son, Malcolm Eberle Moore, married Maud Marvin Mack of a prominent farming family of Moorefield and Oil Trough (Independence County). Her brother, Young Gering Milton Mack Jr., owned a store and gin in Moorefield. The old gin was later made into a residence, which still stands.

The Mack family settled on 280 acres along Blue Creek near Moorefield. In the twenty-first century, this property is still known as Mack Farm and is owned by descendants. Malcolm Moore was a successful farmer and dairyman. He served as secretary of the Moorefield flour mill in the early 1900s and was acting secretary-treasurer and executive director of the Northeast Arkansas Regional Housing Authority when he retired.

The Moore and Mack families controlled most of the businesses in Moorefield, with the Macks owning most of them by the 1950s. The post office was part of the large Mack General Store, which supplied most of the commercial needs of Moorefield. The general store burned in 1972, and the U.S. Postal Service decided to close the post office, something that had been under consideration even before the fire.

Milton Mack was elected state senator and launched a successful movement to make the Arkansas Highway Department an independent department within the state government. An amendment co-sponsored with Senator Lawrence Blackwell, which took effect in 1952, laid the groundwork for the current Arkansas Department of Transportation and led to the establishment of the Mack-Blackwell National Rural Transportation Study Center at the University of Arkansas (UA) in Fayetteville (Washington County).

There is no record of an established church in Independence County until the founding of Moorefield’s Rehobeth Baptist Church, which dates from the 1820s. The church later became housed in the old Moorefield School, a one-story stone building built around 1939 by the National Youth Administration (NYA). The building was placed on the National Register of Historic Places on September 4, 1992. Moorefield School consolidated with the Batesville School District in 1947.

Moorefield was incorporated in 1969, in part to preserve an identity separate from Batesville. Moorefield is located in a strategic business location on the main highway, which is somewhat of an extension of Harrison Street in nearby Batesville. Harrison Street is becoming the main commercial avenue in the city, superseding Main and St. Louis streets. There are several businesses inside the city limits of Moorefield, including an auto sales business, shops, and a major lumber company. Between Batesville and Moorefield are located two of the most popular restaurants in the county: Catfish Wharf and Fred’s Fish House. 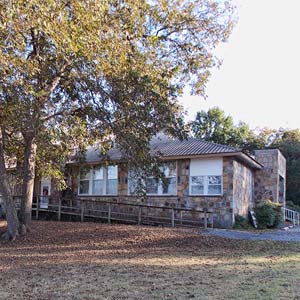