Situated at the intersection of Daisy L. Gatson Bates Drive (formerly 14th Street) and Park Street in Little Rock (Pulaski County), the Little Rock Central High School National Historic Site, a unit of the National Park Service (NPS) since 1998, stands as one of the most significant landmarks of the civil rights movement. In 1957, during the desegregation of Central High School, nine African-American students—the Little Rock Nine—attended classes under federal protection amid internationally publicized protests, violence, and staunch opposition from Governor Orval Faubus and other segregationists.

Originally known as Little Rock High School, the building was completed in 1927, replacing the outgrown all-white high school located at 14th and Cumberland streets. Classes for African-Americans were held at Dunbar High School, constructed in 1929 a few blocks away. Architects John Parks Almand, Lawson L. Delony, George R. Mann, Eugene John Stern, and George H. Wittenburg designed the $1.5 million structure, which the New York Times dubbed the most expensive school ever built in the United States at that time. The name was later changed to Central High School in anticipation of the construction of a new white high school, Hall High.

A combination of Collegiate Gothic and Art Deco architecture, Central High spanned two city blocks, comprising over 150,000 square feet of floor space, upon its completion. Requiring 36 million pounds of concrete and 370 tons of steel, the finished product consisted of 100 classrooms (accommodating over 1,800 students), a fireproof 2,000-seat auditorium, a gymnasium, and a greenhouse. The six-story structure (counting the bell tower and basement) features a middle section containing the auditorium with four classroom wings (two per side) flanking a reflection pool in the foreground of the building. Faced with brick, the building’s highlights include pilasters and colonnades of cut stone, double-hung window frames with twelve lights per sash, and a main entry terrace supported by a colonnade of five masonry arches rising above Corinthian columns of stone. The main entry, with its three pairs of doors and arched openings, is particularly eye-catching, with statues and Gothic lanterns on each pilaster. Inside, corridors are arched at bearing walls and floored in ceramic. Walls and ceilings are plaster, and wooden floors are found throughout except in shop areas.

A testament to its utilitarian design and quality construction, Little Rock Central High School is still in operation as of 2008, making it the only fully functioning high school to be established as a National Historic Site. In 1977, the school was listed on the National Register of Historic Places, and it was designated a National Historic Landmark in 1982. The NPS’s visitor center, located across the intersection from Central High, chronicles the 1957 desegregation crisis with audio-visual programs, including an array of interactive oral history listening stations positioned throughout the museum.

Various noteworthy events commemorated the fiftieth anniversary of Central High’s desegregation. On September 24, 2007, a gala was hosted by President Bill Clinton, and the NPS dedicated its new visitor center with a ceremony featuring a keynote address from civil rights activist and U.S. Representative John Lewis. The following day, nearly 2,000 visitors converged on the front lawn of Central High to honor the Little Rock Nine and reflect on the school’s significant role in the civil rights struggle. 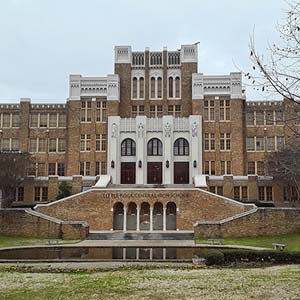