Jacksonport State Park lets visitors relive nineteenth-century Arkansas history—including the days of the pioneers, steamboats, the Civil War, Reconstruction, the Victorian Age, and the Industrial Revolution—through its various exhibits and interpretive programs. The 1872 courthouse serves as a museum, and the last sternwheeler riverboat to ply the White River is permanently moored nearby.

Due to its location near the confluence of the Black and White rivers, Jacksonport became a trading center during the 1820s and thus was significant for the early settlement and economic development of Arkansas. The first steamboats arrived in 1833, and the town grew around the landing site. Jackson County, established in 1829, moved its seat of justice from Augusta (now in Woodruff County) to Jacksonport in 1854, but construction of a courthouse would wait until after the Civil War.

In early 1869, a contract was awarded for Jacksonport’s new brick and limestone courthouse. But before work started, engineer Colonel John A. Schnabel suggested that the stone foundation be raised an additional two feet. This action probably saved the building several times, as floodwaters have reached within inches of the first floor but never entered the building. The two-story building with its Second Empire architecture was finished in 1872 at a cost between $65,000 and $70,000.

In the 1890s, the old courthouse became Jacksonport’s public school. But by 1905, it was converted to a cotton gin, and it later became public housing for the homeless and elderly. During the 1950s, it stood vacant except for periods when it was used to store locally-grown rice. By late 1961, when offered for sale, the once handsome building was in disrepair. Lady Elizabeth Luker, a preservationist and charter president of the newly formed Jackson County Historical Society, headed a successful effort to purchase the building and begin renovation.

The historical society raised funds for the restoration of the courthouse and started accepting artifacts of local and regional interest for planned exhibits there. Luker supervised the early restoration and preservation work, and in 1964, the society purchased additional land, including the land where there once stood the old steamboat landing. Luker and others petitioned their state representative and senator to put forward a bill to make the area a state park. Jacksonport Courthouse State Park was officially dedicated on June 5, 1965, and the land once owned by the Jackson County Historical Society was turned over to the Department of Parks and Tourism. The historical society continued to partner with the park on exhibits and events. The courthouse was added to the National Register of Historic Places in 1970. In 2018, the park built a new visitors’ center.

Potlatch Forests, Inc. donated the Mary Woods No.2 riverboat to the park in 1967. A stern-wheel towboat, it was built in 1931 for the Woods Lumber Company. For thirty-six years, the boat pushed barges of logs to a sawmill on the river at Clarendon (Monroe County). It was brought upstream from Clarendon with great fanfare, under its own power. The historical society and the park worked together to turn the boat into a floating exhibit. It was officially opened for public tours in May 1976.

The Mary Woods No. 2 sank to the bottom during the winter of 1984, after a line that brought water into its cooling system froze and ruptured, allowing the boat to take on water when it thawed; the boat was soon raised and repaired, however. Both the riverboat and courthouse have survived floods and a disastrous 1997 tornado. After restorations that cost over $1.3 million, both were returned to their original appearance. However, the riverboat sank again in early 2010 and, after attempts at restoration, was deemed unsalvageable the following year. The courthouse contains state-of-the-art exhibits from every important period of area history. The park also offers camping, picnic areas, a boat launch, a playground, and nature walks through twenty acres of wildflowers. The largest annual event at the park is “PortFest,” held in early June. 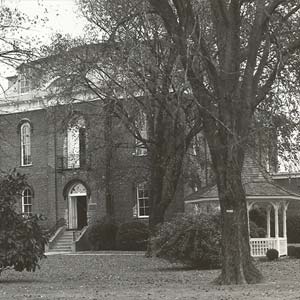