Interstate 630 is an eight-mile-long east-west expressway running through the center of Little Rock (Pulaski County), connecting Interstates 30 (to the east) and 430 (to the west). It was constructed during a two-decade period beginning in the 1960s and is blamed for significant social alterations in the state’s capital city.

The interstate originated with Little Rock city planner John Nolen’s work in the 1930s envisioning a cross-city expressway in Arkansas’s largest city. As the city’s population began moving to the west in the 1950s, interest grew in a highway that would provide easy access between the jobs and shopping based downtown and the homes to the city’s west. In 1958, Metroplan (the metropolitan area’s planning organization) released a tentative plan that included what was identified as the “8th Street Expressway.”

Soon thereafter, a bond program was passed by the city’s voters to aid in the construction of the expressway, and the Arkansas Department of Transportation brought the highway (still in the planning stages) into the state highway system. While the map for the expressway showed key landmarks in the city being saved from demolition, the African-American business district—centered around 9th Street—and the homes of many low-income residents, mostly black, were in the path of the new highway.

In 1964, construction of the middle segment of the project—west of the 9th Street area—began at a slow pace. A one-mile segment between Park and Cedar streets opened to traffic in April of 1969. This short stretch was dubbed the “world’s shortest expressway.” However, a fundamental problem in the completion of the road project was the lack of funding. Gaining access to the federal highway program was essential because that program brought with it a “90/10 match”—i.e., for every $1 of state/local spending, $9 would come from Washington DC. The project’s inclusion in the program was initially denied by the federal highway agency. In 1970, Congressman Wilbur D. Mills, chair of the powerful Ways and Means Committee, became engaged in the project. Within months, the federal highway agency changed course, and the project (now known as Interstate 630 and the Wilbur D. Mills Freeway) was brought into the federal system.

With completion of the project on the horizon, Arkansas Community Organizations for Reform Now (ACORN)—an advocacy group for low- and moderate-income families and communities, founded in 1970—became active in the issue. ACORN opposed completion of the eastern segment because of its impact on the low-income, heavily minority neighborhoods in this section of the interstate’s footprint, as well as the African-American business district.

These issues never gained legal traction in the lawsuits filed by ACORN, but the organization gained a big victory in a 1975 ruling by federal district judge J. Smith Henley, finding that the environmental impact statement filed by the state highway department with the federal government was inadequate. Affirmed by the Eighth Circuit Court of Appeals in 1976, the ruling led to a new environmental impact study that was approved by federal judge G. Thomas Eisele in 1979, allowing the project to proceed. The eastern segment of the highway, the final piece, was opened to traffic on September 29, 1985.

In addition to the clear impact in displacing large portions of Little Rock’s established African-American community, the interstate has been criticized for its role in creating a racially and economically divided city and in encouraging sprawl to the west. The population north of the interstate is heavily white, relatively affluent, and well educated, while census data shows the population to the south of the highway to be heavily African American and challenged on key socioeconomic indicators; the vast majority of Little Rock’s Latino community also resides south of I-630. Analysts of the city’s demographics have argued that Interstate 630 serves as a potent physical and psychological divider in the social fabric of the state’s largest city.

Interstate 630 had also been criticized for its abrupt western terminus at a traffic light at its intersection with Shackleford Road, which has led to traffic snags and numerous accidents, though construction at the I-630/I-430 interchange began in 2009, in part to address this issue. In addition, the interstate has assisted in moving large numbers of Little Rock residents to the west side of the city; some argue that this sprawl has harmed the environment by encouraging travel and harmed the economy by forcing the city to pay for services for those living in areas that were not residential at the time of the construction of I-630.

Pumphrey, Darcy Atwood Baskin. “An Interstate Runs Through It: The Construction of Little Rock’s Interstate 630 and the Fight to Stop It.” MA thesis, University of Arkansas at Little Rock, 2013. 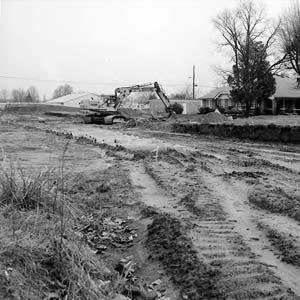