The AFWC was formed at a conference held on April 22–23, 1897. Forty-six representatives from twenty-five clubs around the state met at the Capital Theater in Little Rock after being called together by Mrs. William C. Ratcliffe, who was there elected to lead the organization as president. Charter member clubs included Hot Springs Fortnightly Club, Osceola Book Club, Women’s Library Association of Helena (Phillips County), the Ladies’ Hospital and Benevolent Association of Pine Bluff (Jefferson County), and the Woman’s Literary Club of Van Buren (Crawford County). The clubs’ primary interests were education, child study, art, women’s suffrage, and traveling libraries. The first annual meeting was held on April 20–22, 1898, at Hot Springs (Garland County), where members began working for libraries as a group. Officers were first elected annually, but later elections were biennial.

Clubs created in-home libraries, promoted the establishment of traveling libraries, and lobbied state politicians to raise funds for libraries. By the turn of the century, AFWC had established twenty libraries. Its lobbying efforts for library financing were rewarded when the General Assembly, in 1903 and 1911, provided that cities could levy taxes to support libraries. Early libraries had been funded with subscriptions, or fees. In 1907, AFWC supported the traveling library movement and, in the 1920s, secured the first state appropriation for a free traveling library service into rural areas. It actively supported legislation for Federal Aid to Education, including Libraries (S1304, HR 3517) and promoted organizations such as Friends of the Library. Continuing promotion of county libraries, AFWC gained an appropriation of $100,000 from the legislature for the State Library Commission in 1937 and 1939.

During World War I and World War II, clubs sent thousands of books to soldiers, made financial contributions to the War Library Fund, and sold war bonds.

AFWC initiated the call for preservation of the Old State House in 1904, seeking to preserve it as a museum. In 1907, the organization sold pictures and postcards of the landmark to raise funds, circulated petitions, and published two pamphlets advocating for the Old State House. It was restored and opened as a museum in February 1951, and federation member Agnes Loewer became the museum’s curator. AFWC furnished one of the period rooms displaying Federation memorabilia. The GFWC of Arkansas contributed financially to the renovation, recently completed in 2003–04.

The Arkansas Children’s Colony at Conway (Faulkner County), opened in 1959, became a federation project. AFWC purchased playground equipment for the first six cottages, raised $18,000 to build a chapel at the colony, and donated a stained glass window for the project.

AFWC has played an active role in lobbying for important legislation. It received credit for passage of a law creating the Arkansas State Board of Health and for creating a Department of Home Economics at the University of Arkansas (UA) in Fayetteville (Washington County).

AFWC was passionate and successful in its campaign for the apple blossom as state flower in 1901, sending a barrel of apples to legislators. It was instrumental in securing the adoption of the mockingbird as official state bird in a House concurrent resolution in 1929, which paid tribute to the work of the federation in protecting the birds of the state. In the late 1940s, it was instrumental in founding the University of Arkansas School of Nursing and the Medical Center complex in Little Rock. The federation also worked with the Arkansas legislature to create the Arkansas Council on Children and Youth.

AFWC lobbied for legislation regarding compulsory attendance at schools, a juvenile court, creation of the first public welfare department, admission of women lawyers to the bar, primary suffrage, and the establishment of the Arkansas Training School for Girls. Members circulated resolutions throughout the state supporting legislation to build a bridge across Lake Norfork and later won the support of senators J. William Fulbright and John McClellan as co-sponsors of the bill authorizing the bridge. In addition, it lobbied for preservation of the Buffalo River in its natural state and supported passage of HR 8382, establishing the Buffalo National River. AFWC worked in the campaign for a law requiring automobile seat belts by educating members and the public and by lobbying politicians.

On May 7, 1987, members voted at the annual convention to change the official name to General Federation of Women’s Clubs of Arkansas (GFWC-AR or GFWC of Arkansas).

Between 1997 and 2000, GFWC of Arkansas donated over $200,000 to libraries through gifts of cash, books, supplies, stocks and land. This Libraries 2000 effort was GFWC of Arkansas’s role in supporting Governor Mike Huckabee’s Arkansas’ Promise Program. 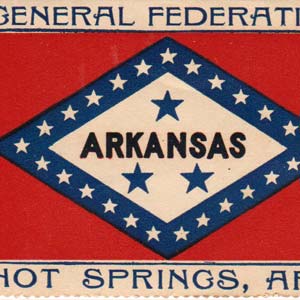 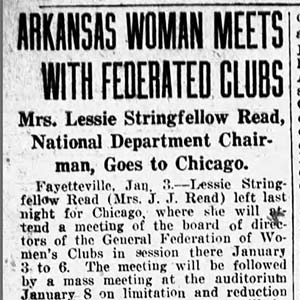