Burns Gables was a popular restaurant, gift shop, and lodge that operated on Mount Gayler (Crawford County) for more than forty years from its preeminent location at the “Top of the Ozarks.”

Fort Smith (Sebastian County) pharmacist John Burns opened the resort in 1936, a short but steep and winding four miles south of Winslow (Washington County). He believed the place was ripe for business, given the popularity of Winslow as a resort. The original three-story lodge, which incorporated Tudor architecture, was built from native stone and topped with several ornate gables. Gabled cottages were built around a garden behind the lodge. The resort was expanded in approximately 1949, when a wing was built onto the lodge’s south side. The new floor space allowed for the enlargement of the gift shop and the addition of a sun deck.

Located off U.S. Highway 71 between Fort Smith and Fayetteville (Washington County), Burns Gables became an essential pitstop for motorists who reached the peak of Mount Gayler. It was a welcome respite from the heavily traveled Highway 71, which was the main route between the two cities until the completion of Interstate 49 in 1999. At 2,253 feet, Burns Gables also occupied the highest elevation point in that part of the Boston Mountains.

Burns Gables was also a sought-after locale for club meetings and holiday parties. On Razorback football weekends, there would be big tips if the Hogs won. Several of the resort’s newspaper ads and postcards—which showcased the cottages’ spectacular view of the Ozarks—touted the restaurant’s “good southern vittles,” “luscious pies,” and bread that was baked on site. One 1940 postcard highlighted Burns Gables’ “modern rooms” and “largest novelty shop in the Ozarks.” It declared the establishment to be “a place for a mother, sister or sweetheart. Once you stop at this magnificent place it will always remain in your memory.” An ad from 1951 reminded customers that a meal at Burns Gables featured “no extra charge for the finest scenery in the Ozarks.”

John Burns died in July 1947 following a two-year illness. His wife, Laveda Burns, took over the resort and managed it for the next twenty years. She guided the business after a devastating fire in January 1952 destroyed the main lodge. Firefighters from Fayetteville and Alma (Crawford County) used water from nearby Mount Gayler Lake to preserve what they could, while neighbors helped remove merchandise from the lodge before it collapsed. Fayetteville’s fire chief Burl Skelton estimated that the blaze caused more than $70,000 in damages (more than $600,000 in 2021 when adjusted for inflation). Laveda Burns reopened the resort—which no longer had gables—just over a year later. She christened the new building in March 1953 with a benefit ball for the Boston Mountain Fire Department, which was formed in the wake of the fire.

Burns handed the business over to her daughter, Mary Lou Osburn, and son-in-law, Jim Osburn, in 1968. She remained in the area and often helped during peak business times.

By the 1970s, fewer people were stopping at the businesses that catered to people driving over the mountain between Fort Smith and Fayetteville. With the Osburns nearing retirement and Burns Gables unable to thrive like it once did, they closed the restaurant in 1979. One of their sons kept it open through 1999 for snacks and souvenirs—and, later, video rentals—but it never reopened as a full-scale eatery.

The Osburn family held on to the property until 2019, when it was sold to CWT Properties of Fort Smith. The land was available for purchase as of 2021, but the building that housed the restaurant and gift shop had been abandoned. A handful of the “modern” cottages remained, while the dirt path that guided drivers from U.S. Highway 71 into the complex was reclaimed by nature, along with the once well-manicured garden.

Business, Commerce, and Industry
Tourism
World War II through the Faubus Era, 1941 through 1967 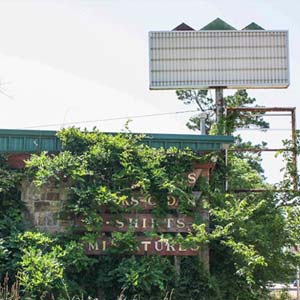