Smackover’s existence is a result of one of the largest and most dramatic oil discoveries in the nation. Its sixty-eight-square-mile oil field led the nation’s oil output in 1925, with production reaching seventy million barrels. Prior to the discovery of oil, the area’s economy initially relied upon cotton and, by 1890, a timber industry that thrived in the vast virgin forests of southern Arkansas.

By 1830, settlers holding land grants had migrated to the area. An agrarian economy, bolstered by a single cash crop, cotton, was prevalent until after the Civil War. There were only two large plantations situated within the Smackover area (belonging to the Saxon and Reeves families), with the remaining land utilized exclusively by smaller farms of fewer than 500 acres. As a result, slavery was minimal.

Harsh economic conditions beset the area during and after the Civil War. Although only one major battle was fought in south central Arkansas (the Engagement at Poison Spring), the population experienced extreme difficulties. By 1870, taxation exacted a swift toll. Farms that had been in families for fifty years were sold on the courthouse steps to the highest bidder. Many families that had been solvent only ten years before were destitute.

Post-Reconstruction through the Gilded Age
By 1879, the region’s first post office, with the designation Smackover, had opened near a landing on the Ouachita River about five miles north of present-day Smackover. Meanwhile, a new hamlet resulted from railroad construction through southern Arkansas connecting Camden (Ouachita County) and points south to Alexandria, Louisiana. When the railroad survey was completed, it included, almost as an afterthought, a modest layout of a town that included a railhead water stop.

The unincorporated town of fifty residents was named Henderson City in honor of the Alexandria-Camden Railroad Company president, John C. Henderson. The application for a post office was quickly dispatched to Washington DC. Officials learned that Arkansas already had a Henderson post office designation, so the federal government decided to close and move the existing and rarely used Smackover post office located at Newport Landing in Ouachita County. Once the move was completed, the Smackover designation belonged to both a post office and a town.

Early Twentieth Century
By 1908, Sidney Albert Umsted operated a large sawmill and logging venture two miles north of town. He believed that oil lay beneath the earth’s surface in the region. Few paid attention, but Umsted quietly went about buying land and leasing what was not for sale. An economic blockbuster was about to alter the destiny of a town and its people.

On July 1, 1922, Umsted’s wildcat well reached a depth of 2,066 feet. Abruptly, a rumble came from deep beneath the earth’s surface. The crew stepped away, listening. Suddenly, a thick black column of oil burst forth and spurted high above the earth.

Within six months, 1,000 wells had been drilled, with a success rate of ninety-two percent. The little town had increased from a mere ninety to 25,000, and its uncommon name would quickly attain national attention.

Smackover was officially incorporated on November 3, 1922. Lawlessness was so rampant that, among the twenty-five petitioners on the incorporation document, none was willing to hold public office. Later that month, the town saw a multi-day riot of unbridled violence. The town’s population steadily declined as oil companies and their employees moved away when more lucrative oil discoveries were made in Texas and Oklahoma. About 100 independent oil companies replaced the twelve major petroleum corporations in this period.

Unfortunately, conservation laws to protect the environment were absent in Arkansas, and as a result, wells were allowed to “run wild” until the natural gas had been vented into the atmosphere. This practice eventually ruined the giant oil field, which could be compared to a punctured aerosol can that has half of its contents remaining but no remaining interior pressure to remove it. By the early 1930s, the Smackover oil field’s production had declined dramatically, and the petroleum industry’s attention turned to new discoveries in Texas and Oklahoma. The 1923 population of 25,000 decreased to 2,500.

World War II through the Faubus Era
The town’s economic outlook improved considerably during World War II, when new oil discoveries fueled the area’s four refineries. The war effort created a huge demand for petroleum, and the oil field was the focus of renewed exploration and drilling.

Although the Smackover field is still going strong into the twenty-first century, it has none of the robust vigor that was so prevalent in the 1920s. Its landscape is scarred by oil and saltwater running freely over the earth and into its streams due to the work of the oil industry.

Modern Era
Although the boom days are over, Smackover is still a viable community with a stable population. The petroleum industry still plays an important role in its economy with fifty percent of its population depending upon the oil industry.

Smackover has experienced numerous improvements through the years, but its main street appears much as it did in the boom days; many of the original brick structures remain. Well-established churches, five city parks, a nature trail, a country club, and unlimited boating, fishing, and hunting opportunities make the town a welcoming community. The Oil Town Festival has been held annually since 1971 with free concerts and free family and children’s activities.

The citizens of Smackover consider their school system to be the town’s most important asset. Since 1995, ninety-five percent of the school’s campus has been replaced with new construction.

Former Smackover residents of note are Sidney Albert Umsted, who discovered the Smackover oil field, and Clyde “Smackover” Scott, who was an All-American in football and track and field at the University of Arkansas, as well as an Olympic silver medallist.

Smackover was also home to Rhena Salome Miller Meyer, better known as the “Goat Woman,” who lived in Smackover from 1929 until her death in 1988. She was an ex-Barnum and Bailey circus performer who lived with her husband in a circus carriage and raised goats. The Goat Woman’s circus carriage is featured in an exhibit gallery in the Arkansas Museum of Natural Resources, which is located near Smackover. 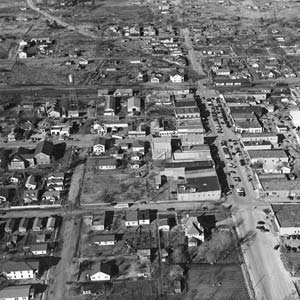 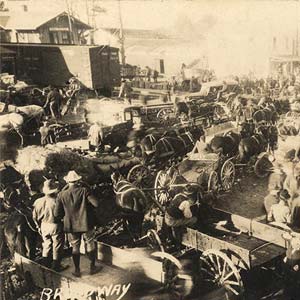