The Megaloptera were once regarded as a part of a group of insects called Neuroptera, together with the lacewings and snakeflies; however, they are now generally considered to be separate orders, with Neuroptera only referring to the lacewings and their relatives (formerly Planipennia). The former Neuroptera, particularly the lacewing group, are very closely related to each other, and the new name for this group is Neuropterida. This group is either placed at the rank of superorder with the Endopterygota—of which they are part—becoming an unranked clade above it, or the Endopterygota are maintained as a superorder, with an unranked Neuropterida being a part of them. Within the endopterygotes, the closest living relatives of the neuropteridan clade are the beetles (order Coleoptera).

The Megaloptera are monophyletic and are a sister clade of the Neuroptera. Within the order, the subfamilies Corydalinae and Chauliodinae are considered sister clades. The divergence time estimation suggests that the stem lineage of Neuropterida and Coleoptera separated in the Early Permian. Apart from the two living families, there are a few ancient taxa in the Megaloptera, only known from fossils, and some of these dwell in a more basal position.

Across much of their distributional range, megalopterans are relatively unknown insects for several reasons: (1) adults have short lives, (2) the aquatic larvae often have high tolerance of pollution (so they are not often encountered), and (3) they generally have crepuscular or nocturnal habits, except adult alderflies, which are diurnal and not too frequently collected.

Morphologically, in general, adult megalopterans possess large and sub-equal wings with a pleated region on their hindwings, helping them to fold over their abdomen. The Asian dobsonfly (Acanthacorydalis fruhstorferi) of China has a wingspan of up to 21.6 cm (8.5 in.), making it the largest aquatic insect in the world. Megalopterans have strong mandibles and mouthparts apparently adapted for chewing, although, as adults, many species do not eat. They also have large compound eyes, and, in some species, ocelli. Larvae possess strong jaws that they use to capture prey. They also have large heads and elongated bodies. Their abdomen bears a number of fine tactile filaments, which, in some species, may include gills. The final segment of the abdomen bears either a pair of prolegs, or a single, tail-like appendage.

Reproductively, female megalopterans may lay up to 3,000 eggs in a single mass, placing them on overhanging vegetation above water. Megalopterans undergo the most basic form of complete metamorphosis among insects. There are fewer differences between the larval and adult forms of Megaloptera than in any other order of holometabolous insects, and their aquatic larvae occur in freshwater, around which the adults also live. The larvae grow slowly, taking from one to five years to reach the last larval stage. When they reach maturity, they crawl out onto land to pupate in damp soil or under logs. Unusually, the pupa is fully motile, with large mandibles that it can use to defend itself against predators. The short-lived adults may live from a few hours or up to seven days and emerge from the pupa to mate. However, their entire lifespan is several years, but most of this time is spent as larvae.

Many species of megalopterans never feed as adults. In general, larval megalopterans are generalist predators and will eat aquatic plants as well as small invertebrates such as crustaceans, clams, worms, ostracods, and aquatic insects (especially larval black flies and net spinning caddisflies); they have also been reported to take vertebrates such as minnows and tadpoles.

The dobsonflies, who belong to the family Corydalidae and subfamily Corydalinae, are a well-known group containing about sixty species; in eastern North America Corydalus cornutus is a common taxon. Dobsonflies are most biologically famous because as adults their males have tusk-like mandibles. These, while intimidating in appearance, are relatively harmless to humans and other animals; they serve mainly to impress females. The mandibles are also used to hold females during mating, and some males spar with each other in courtship displays, trying to flip each other using their mandibles. Dobsonflies possess eight pairs of lateral processes as well as anal prolegs with a pair of terminal hooks used to grasp the substrate. At the end of their abdomen is a pair of claw-like structures.

Larval dobsonflies (hellgrammites) usually inhabit the swiftest rocky sections of large streams and rivers and usually hide under rocks or logs. Adults prefer to stay near water and are most often observed in late spring and early summer. They are long-lived insects. For example, larval dobsonflies typically live for two or three years in aquatic environs before pupating and becoming winged adults. Hellgrammites are often used by anglers as bait in North America.

Fishflies belong to the family Corydalidae and subfamily Chauliodinae and are most clearly distinguished from their closest relatives, the dobsonflies, by their jaws (mandibles) and antennae. In contrast to the large jaws (especially in males) of dobsonflies, fishfly mandibles are not particularly conspicuous or distinctive, and the males possess feathery antennae. They also have several pairs of fleshy filaments extending from the sides of their abdomens, and, unlike in hellgrammites, there are no fuzzy gill tufts at their bases.

Some larval fishflies prefer sluggish, detritus-littered waters, including the boundaries of streams, whereas others require clearer, faster-flowing, well-oxygenated streams where they hide among stones. The short-lived adults are usually found among vegetation along streams. Larval fishflies are omnivorous or predatory, using their stout mouth-like pincers for grasping and chewing. In the eastern United States, the genera Chauliodes, Neohermes, and Nigronia are common. The “summer fishfly,” Chauliodes pectinicornis, is a well-known species in North America.

Alderflies (with about sixty-six species) belong to the family Sialidae. They are closely related to and look like dobsonflies and fishflies but are usually smaller. They have a body length of less than 25 mm (1 in.), long filamentous antennae, and four large dark wings of which the anterior pair is slightly longer than the posterior. They lack ocelli, and their fourth tarsal segment is dilated and deeply bi-lobed. Alderflies also possess seven pairs of pointed appendages along the abdomen; a single tail filament points straight back.

Different species of alderflies prefer various types of aquatic habitats. For example, some larvae prefer slow-moving, detritus-littered waters, such as lakes and ponds, whereas others prefer quieter sections of rivers and streams with silt-bottomed pools; some species can even tolerate polluted waters. Like fishflies, the short-lived adults are usually found among vegetation near water. Larval alderflies are omnivorous or predatory, using their stout mouth pincers for grasping and chewing smaller aquatic invertebrates or organic materials. Anglers use dead alderfly larvae as bait.

In Arkansas, the following megalopteran species have been reported from several counties as follows:

Wang, Y., X. Liu, S. L. Winterton, and D. Yang. “The First Mitochondrial Genome for the Fishfly Subfamily Chauliodinae and Implications for the Higher Phylogeny of Megaloptera.” PLoS One 7 (2012): e47302. 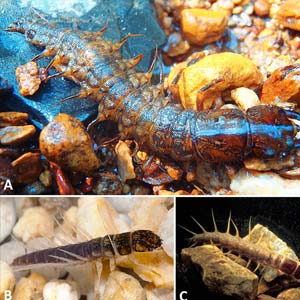