Grant County, located in central Arkansas, is best known for its timber industry. The county is saturated with logging operators who use modern techniques to harvest pine trees and hardwood saw logs. The logs are transported to the International Paper Company mill in Pine Bluff (Jefferson County) and to sawmills in Leola (Grant County), Benton (Saline County), and nearby towns. The county’s largest community celebration, Timberfest, is held each October in Sheridan, the county seat. Other cities in the county include Grapevine, Prattsville, Poyen, and Tull. Sheridan has attracted some large manufacturing plants in the past forty years.

Pre-European Exploration through Early Statehood
The common occurrence of prehistoric archaeological sites in Grant County testify to the early presence of Native Americans, who dwelt therefor thousands of years before European and American settlement. Artifacts havebeen found in various locations around the county, including north of Prattsville and along Big Creek. During the historic period, both the Caddo and the Quapaw claimed land within the boundaries of present-day Grant County. Later, Cherokee and Choctaw settlers lived for a time in Grant County before being forcibly removed to Indian Territory (present-day Oklahoma). One typical early white settler was Richard D. Rhodes, who somehow obtained certificates intended for Choctaw settlement and claimed 320 acres of land in 1857 and another 320 acres in 1858.

One of the first roads in the county was a section of the Camden Trail, which stretched through the Saline River bottoms. The western part of the county was served by a narrow wagon road that linked Little Rock (Pulaski County) and Camden (Ouachita County). The river had five ferry crossings in the 1800s. Mules, wagons, and slips were used to build the roads.

The inexpensive land attracted settlers; some brought their African-American slaves. They arrived by wagon train, some coming in the 1840s from Alabama. Approximately sixty Grant County families owned slaves at the beginning of the Civil War.

Civil War through the Gilded Age
When the Civil War broke out in 1861, many men from Grant County joined Arkansas regiments, and a year later, the area had few able-bodied men left. Almost 150 troops died in April 1864 in the Engagement at Jenkins’ Ferry fifteen miles from Sheridan, which ended in a Union victory. The site is now a state park. After the war, jayhawkers, bushwhackers, and guerrillas overran the area. The guerrillas were out for themselves and roamed the countryside, killing and taking revenge.

Present-day Grant County was, following the Civil War, part of Hot Spring, Saline, and Jefferson counties. Because some trips to the courthouses of these counties could involve a two-day trip, state representative John W. Harrison and state senator Enoch H. Vance Sr. put forward a bill to create a centrally located county in the area. Governor Powell Clayton signed a bill creating Grant County on February 4, 1869. Those behind the creation of the new county had been supporters of the Union during the war, so they named the new county after General Ulysses S. Grant and the county seat after General Philip H. Sheridan. Residents tried several times to change the names but failed.

The first county courthouse was built in 1870. On March 13, 1877, it burned, along with all the county records. The second courthouse was completed in 1880.

J. H. Hamlen and Son was among the first lumber companies to set up operations in Grant County in the 1880s. Originally, these companies floated logs down the Saline and Ouachita rivers, but the railroads that were built in the county around the turn of the century changed that. Sheridan, Poyen, Leola, Belfast, Fenter, and Prague had railroad depots. In 1899–1900, a line was constructed linking Sheridan to Pine Bluff to transport logs to sawmills there. Trains operated in the county until 1983.

Early Twentieth Century
The third courthouse for the county was constructed in 1909 in a late Victorian style and included a tower containing the county’s first public clock. Minnie B. Clark served as the first woman sheriff of Grant County from 1937 to 1938.

On September 23, 1919, Missionary Baptist College held its first session in Sheridan’s Big Creek Baptist Church. Two years later, the college purchased eleven acres of land and constructed a two-story brick building there. Missionary Baptist College was forced to close in 1934 during the Depression, and the following year, the Sheridan School District acquired the campus. The building was used as a school until it burned in 1956.

On January 19, 1922, the Sheridan Highlight newspaper announced the organization of the Ku Klux Klan (KKK) in Grant County. In March of the following year, from fifty-five to 155 Klansmen held a parade in Sheridan. A separate chapter of the KKK was formed in Leola in 1922, but the organization seems not to have had any staying power.

During the Depression, timber interests bought up large swaths of land at cheap prices as their original owners lost them due to non-payment of taxes. Soon, however, much of the timber was exhausted, and many companies moved away. Some companies did begin to engage in forest restoration. By 1941, C. E. Baxter of Long-Bell Lumber Company developed a section of previously cut-over land into a 70,000-acre forest.

The Civilian Conservation Corps was active in Grant County during the Depression. The men at Camp Sheridan were primarily involved in forestry work. Also active in the county was the National Youth Administration, which built school buildings in Prattsville, Grapevine, Oak Grove, Leola, Poyen, and Sheridan.

World War II through the Modern Era
During World War II, the Grant County Cannery was established on the campus of Sheridan High School in an effort to help people cope with a rationed diet. People could bring their food and canning supplies, and workers there did the actual canning. Elkins Cabinet Shop in Sheridan made ammunition boxes for the war effort.

From the 1940s to the 1960s, sawmills employed hundreds in Grant County. Early mills were steam powered, and logs were hauled by wagon and loaded onto rail cars. Individuals, the government, and railroads owned the timberlands for years, but paper companies began buying the land in the 1920s. J. L. Williams and Sons located in Sheridan in 1923 and stayed until the 1960s; others cut timber and moved on. Sheridan White Rock Inc. mines a unique white gravel vein and ships its products around the world.

In 1954, Sheridan’s African-American population was essentially evicted from town in response to the Brown v. Board of Education of Topeka, Kansas decision of the U.S. Supreme Court. This eviction was carried out by the owner of a local sawmill that employed many black workers (and also owned the homes in which these workers lived). He offered his black workers the choice of giving them their homes and moving them to Malvern (Hot Spring County) or forcibly evicting them. Other black residents not connected with the sawmill soon left, and Sheridan became a “sundown town.” This population migration resulted in the Sheridan public schools remaining all white until 1992, when school consolidation in the county brought in the first black students.

The current courthouse was dedicated on July 12, 1964, and is an example of Greek Revival architecture.

The Grant County Museum in Sheridan was founded in 1970 and moved to its new quarters in 1994. An agency of the county government, it began as a Civil War museum but now offers exhibits covering every period of Grant County’s history.

Famous Residents
U.S. senator John Little McClellan was a native of Grant County. Edward Frederick McDonald Sr. of Sheridan served as Arkansas’s secretary of state from 1931 to 1936. Raymond Hoyt Thornton, who grew up in Sheridan, served as state attorney general, U.S. representative, and president of Arkansas State University (ASU) and the University of Arkansas (UA) in Fayetteville (Washington County); he also served on the state Supreme Court.

Perhaps the county’s most celebrated residents were brothers W. R. (Witt) and Jackson T. Stephens. Born in Prattsville, they made hundreds of millions of dollars in the natural gas business and started the country’s largest off–Wall Street investment firm. They gave millions of dollars to charity; the community center in Prattsville and the main building of the Grant County Museum are named for them.

The county has had many literary and artistic talents. Thomas B. Morton served in the legislature, edited newspapers, and wrote poetry and a novel. Colonel Charles William Blyth, who lived in Sheridan for a time, wrote the official Marine Corps Prayer. The Lancaster family of Sheridan has produced a few writers, such as Bob Lancaster, a novelist and a columnist for the Arkansas Times. 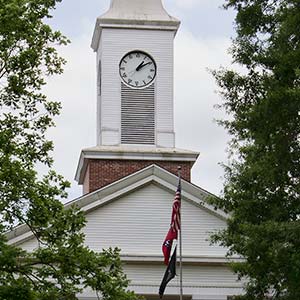