The Arkansas State Fair and Livestock Show (usually just called the Arkansas State Fair) is an annual event sponsored by the Arkansas Livestock Show Association and held in Little Rock (Pulaski County). The fair features a midway/carnival, music concerts, a rodeo, commercial exhibits and displays, free shows (from exotic animals to acrobats and magicians), arts and crafts competitions and exhibits, food competitions and demonstrations, and various livestock competitions. It runs for ten days, usually in October, starting on a Friday and running through two weekends, ending on a Sunday night.

The current Arkansas State Fair began in 1938, but there had been several other efforts over the years to establish a state fair. On November 6, 1867, the Arkansas State Agricultural and Mechanical Association was formed for several purposes, including the establishment of a state fair. The first Arkansas State Fair was held in Little Rock on November 17–20, 1868. It was located at the end of Center Street (now the corner of Center and 17th) until 1876, when it was moved to Arch Street. On May 1, 1881, the State Fair Association of Arkansas was incorporated. It used 110 acres on East 9th Street for the fair until World War I. State fair records reveal a “state fair” at Oaklawn Park (now Oaklawn Racing Casino Resort) in Hot Springs (Garland County) beginning in 1906, and one at Fair Park in Little Rock in 1922, but no other records exist on early state fairs.

Arkansas was still feeling the effects of the Depression well into the 1930s. The economy was in disarray, and the primary cash crop of the state—cotton—was in decline. In 1937, a survey by the University of Arkansas Agricultural Cooperative Extension Service (UACES) revealed that livestock would be successful in the state. A group of leaders, who later formed the Arkansas Livestock Show Association, decided to hold a livestock exposition to educate farmers and to promote the new industry. The first Arkansas Livestock Show—later changed to the Arkansas State Fair and Livestock Show—was held November 9–13, 1938, in North Little Rock (Pulaski County) at 5th and Smothers. Only 17,000 people attended, and the show lost $23,000. In 1939, the fair and show were moved back a month, to mid-October, for better weather. In addition to the time change, fair promoters brought in their first celebrity, a young movie star named Roy Rogers. The move worked, leading to celebrities being featured every year since, among them being Western stars such as Gene Autry and musicians such as Johnny Cash.

The Arkansas State Fair continued in North Little Rock for three more years. But the day after the 1942 fair ended, fire swept through the relatively new buildings, burning them to the ground. The fair was moved in 1943 to Pine Bluff (Jefferson County), which had some limited facilities, but the demands of World War II forced the association to cancel the fair and show entirely in 1944 and 1945.

In 1944, Little Rock made a proposal to the association, offering a permanent site for the state fair at what is now War Memorial Park. The 1922 state fair had been held at that site, but the association did not like the location and turned it down. In 1945, the Little Rock Chamber of Commerce offered several acres on Roosevelt Road, and the association accepted that site for its permanent home. In later years, the association expanded its holdings north of Roosevelt Road, as well as east and south. Today, the State Fairgrounds Complex, as it now is called, consists of 135 acres, of which ninety-six are occupied.

Permanent buildings were built throughout the 1940s, 1950s, and 1960s, greatly enhancing the show and fair. The 1945 Arkansas legislature helped the association by granting a $250,000 appropriation per year over two years. This money helped underwrite a major building program. The first buildings were the show barns for livestock. These included separate facilities for cattle, sheep, pigs, horses, and poultry.

Construction of a major arena began in 1948, was completed in 1951, and was dedicated in September 1952. It was named Barton Coliseum, after El Dorado (Union County) oilman Colonel T. H. Barton. For many years, the building had the largest seating capacity in the state. It is used for concerts the first weekend of the fair and for the annual rodeo the second weekend. Other buildings constructed were the Arkansas Building, built in 1950, which has been used for trade show exhibits, youth talent shows, the Fair Queen contest, and farm-cured ham and bacon shows, among other activities; the Farm and Ranch Building, completed in 1965, which houses members of the Future Farmers of America (FFA) and the 4-H Clubs in dormitory-style accommodations during the state fair; the Hall of Industry, which was built in 1966 and serves as the primary location of commercial business exhibits during the fair; and the Arts and Crafts Building, built in 1976, where the winning exhibits of hand-crafted items, food products and produce, art, photography, and more are displayed. A 5,000-seat grandstand was installed in 1957. It continued in active use for a wide variety of activities until it was taken down in 1998; the stage was dismantled in 2004.

A State Fair Queen is selected each year, as well as a Rodeo Queen. Finalists for the Fair Queen are county and district fair queens. Rodeo Queen contestants are nominated by local riding or civic clubs. For many years, starting in 1946, there was a State Fair Parade, complete with a parade marshal. But the parade was finally discontinued in 1984 due to schools tightening up on class absences, as well as concerns for student safety at the downtown event. A Junior Livestock Sale raises funds to help cover expenses for young exhibitors, as well as for continuing their education with scholarships. A Youth Talent Show was started in 1958 and has been held annually since.

In 2021, after having been canceled the previous year due to the COVID-19 pandemic, the fair set an attendance record of 539,358 people. 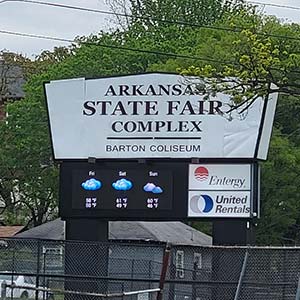