Although many lynchings in Arkansas occurred in connection with serious crimes, real or alleged, there were some people lynched for trivial reasons. On May 13, 1897, an African-American man named Presley Oats was, according to national reports, dragged from his home in Pope County and lynched for supposedly stealing a ham. This incident preceded the Atkins Race War, which began approximately two weeks later. It was, however, indicative of the racial animus caused by the recent influx of African Americans into the county. Many of these new arrivals accepted lower wages for farm work and work in the lumber mills, causing resentment among area whites. Although one newspaper account of the incident referred to Presley Oats as an “old negro,” …

Dunbar Hunt Ogden Jr. was a Presbyterian minister who played an important role in the effort to desegregate Central High School in Little Rock (Pulaski County) in the mid-twentieth century. His support for the Little Rock Nine was controversial, and his efforts split his congregation. Ultimately, faced with diminishing support, Ogden resigned his pastorate and left Arkansas, taking over a church in West Virginia and eventually retiring in California. Dunbar Ogden Jr. was born on August 15, 1902, in Columbus, Mississippi. One of seven children born to Dunbar H. Ogden, who was a minister, and Grace Augusta Cox Ogden, Ogden was brought up in Knoxville, Tennessee, and Atlanta, Georgia. He attended Boys High School in Atlanta before going to Davidson …

Mahlon Dickerson (M. D.) Ogden was a physician who cofounded Trinity Hospital of Little Rock (Pulaski County) in 1923. At Trinity, he pioneered the use of the health maintenance organization (HMO)—a form of health insurance in which member physicians provide medical care to subscribers for a fixed fee—in Arkansas. Born on December 5, 1881, in Little Rock, M. D. Ogden was the only son of railroad clerk Charles Cullen Ogden and his wife, Altamira Deason Ogden. An older cousin, Fred R. Bryson, was adopted into the family and became Ogden’s legal brother. Educated in the local schools, Ogden graduated from the Arkansas Medical School (now the University of Arkansas for Medical Sciences) in 1904. From 1905 to 1916, he taught …

Old Mike is the name given to a traveling salesman who died in 1911 in Prescott (Nevada County). The people of Prescott only knew him by his first name, Mike. He was subsequently embalmed and publicly displayed for over sixty years. Mike visited Prescott about once a month to sell pens, paper, and thread to homes and businesses near the railroad tracks in the center of town. He would arrive on the southbound 3:00 p.m. train and stay overnight. The next day, he would re-board the 3:00 p.m. train and continue his journey. During one trip to Prescott, Mike probably attended an outdoor revival in the city park. The next day, August 21, 1911, his body was found underneath a …

William Allan Oldfield was elected as a Democrat to the Sixty-first U.S. Congress and to the nine succeeding Congresses, serving from 1909 until his death in 1928. During that time, he served as a member of the House of Representatives Committee on Ways and Means and was chosen as chair of the Democratic Congressional Committee, campaigning across the country for Democratic candidates and incumbents. He was reelected to the Seventy-first Congress, his tenth consecutive term, but he died before he could take office. After a special election, his wife took his place in Congress, becoming the first woman in Arkansas elected to the U.S. House of Representatives. William A. Oldfield was born in Franklin (Izard County) on February 4, 1874, … On July 28, 1884, an African-American man named Dan Oliver was shot by a mob near Roseville (Logan County) for allegedly attempting to assault the daughter of a local white man identified only by his last name, Amos. Amos, whom the Arkansas Gazette called “one of the best citizens of Logan County,” was probably Elisha Amos. According to public records, Elisha Amos was born in Tennessee in 1841, and by 1860, he and his parents were living in Arkansas. He married Malinda Ann Pendergraft in Franklin County in 1862, and served in the Civil War. In 1870, he and Malinda and two children, Jesse (three years old) and Emily (six months), were living in Sebastian County. Elisha Amos was living …

Marvin Elmer Oliver was an artist, farmer, and civil service employee in the Arkansas Ozarks. In 1955, he produced a book, Strange Scenes in the Ozarks, which attracted notice because of its unique artistic qualities. Text and illustrations were printed using the silk-screen (or serigraph) process, assembled by hand, and enclosed in a handmade cover. Oliver published 400 copies. The text describes the backwoods life Oliver remembered, which was almost completely gone by the time he produced his book. His distinctive illustrations make Strange Scenes in the Ozarks an item of interest to collectors of Arkansiana and of regional art. Oliver later published Old Mills of the Ozarks (1969) with black-and-white sketches, descriptions, and locations of twenty water-powered mills. M. … Edward Otho C. Ord was a major general in the Union army during the Civil War and commanded the Department of Arkansas and the Fourth Military District during Reconstruction. Born in Cumberland, Maryland, on October 18, 1818, Edward O. C. Ord was the son of James and Rebecca Ord. The family moved to Washington DC when Ord was young. Tutored by his father, he was known as a mathematical genius. He entered the United States Military Academy at West Point at the age of sixteen. He graduated in 1839 and received a commission as a second lieutenant in the Third United States Artillery. After service during the Second Seminole War and a promotion to first lieutenant in 1841, Ord sailed … 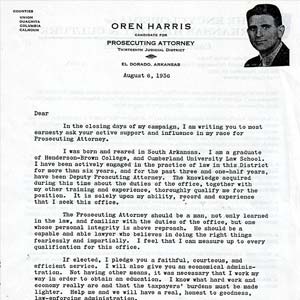 Arkansas’s original Tuskegee Airmen were a part of a segregated group composed of African-American Army Air Corps cadets, personnel, and support staff known as the Tuskegee Airmen. There were twelve Arkansans documented who performed and maintained various roles at the Tuskegee Institute in Alabama. Those roles included flight instructor, pilot, flight officer, engineer, bombardier, navigator, radio technician, air traffic controller, parachute rigger, weather observer, medical professional, and electronic communications specialist. Other support staff may have included Arkansans. The term “original” is applied to the individuals who received government and civilian instructional training while at Tuskegee between 1941 and 1946. Approximately 992 pilots were trained at Tuskegee, 450 of whom saw action overseas during the war; four of those were Arkansans. …

David Orr was one of the earliest preachers in northeastern Arkansas, settling in the state in about 1828. During his time in the region, he started nine different churches and founded the Spring River and Rocky Bayou Baptist Associations in the Ozark Mountains east of the White River. Although Orr was exclusively a Baptist preacher, he was also interested in modern-day religious revelations, such as those of the Mormons and New York farmer William Miller. After his birth in Bourbon County, Kentucky, in 1798, Orr lived near Cincinnati, Ohio, seventy miles away from his birthplace. While in Cincinnati, he was influenced and baptized by Jeremiah Vardeman, a fiery revivalist preacher during the Second Great Awakening. Orr married Eliza Caldwell in …

Zaphney Orto, a prominent physician who helped discover the link between malaria and mosquitoes, was a U.S. army major and surgeon during the Spanish-American War, and the second president of Simmons First National Bank, founded in Pine Bluff (Jefferson County). Born to Leonidas Orto and Martha G. McElwee Orto in Somerville, Tennessee, in 1842, Zaphney Orto lived on a farm near Somerville until he was eighteen, then worked in a store for two years. He studied medicine with Dr. S. W. Thompson of Evansville, Indiana, and graduated from the Miami Medical College of Cincinnati, Ohio, in 1872. Shortly afterward, he moved to Arkansas, where he settled in Clover Bend (Lawrence County). He practiced medicine there for two years before moving …

On September 8, 1884 (some papers give the date as September 9), a white man named Mat Orton was lynched in Arkansas City (Desha County) for allegedly setting a fire that destroyed many of the town’s businesses. There is some information about Mat Orton in newspaper accounts and public records. In 1880, he was thirty-three years old and was living in Arkansas City and working as a carpenter. He married Margaret McCoy there on March 14, 1882. An article in the Arkansas Gazette on May 16, 1883, indicates that Orton was a deputy sheriff and was sent to retrieve R. H. Costello (sometimes called Castelio, although census records list him as Costelo), who was wanted in Desha County for the … 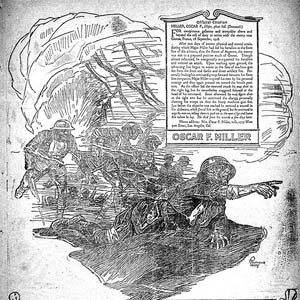 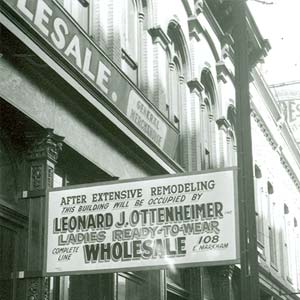 Gus Ottenheimer, an industrialist, became known nationally through his successful efforts in manufacturing women’s garments. He was a land developer as well, and he spent much of the last one-third of his life promoting higher education in central Arkansas Ottenheimer was born in Little Rock (Pulaski County) on July 18, 1897, to Daniel Ottenheimer and Hannah Berger. He was the youngest of four children. The Ottenheimers were a Jewish pioneer family, some of whom came to the state in the 1850s. Ottenheimer’s father died in 1908. The eldest son, Leonard, became the family breadwinner at age sixteen and forfeited his education to his younger brother. Ottenheimer graduated in 1918 from Washington & Lee University School of Law in Lexington, Virginia, …

Perry Wayne Ouzts, a professional jockey from Lepanto (Poinsett County), is one of twenty-one professional riders to have won 5,000 races. Around horseracing tracks, he is nicknamed the “Workingman’s Hero” or, for his unique riding style, “Scoot N’ Boot.” He has also been noted for overcoming numerous potentially career-ending injuries. Perry Ouzts was born in Lepanto on July 7, 1954, but was raised primarily in Rivervale (Poinsett County). During his years in Rivervale, Ouzts began riding horses with his cousins Earlie and Jackie Fires. Earlie Fires was eventually inducted into the Hall of Fame of Jockeys, while Jackie’s career ended when his body was crushed during a horse race in 1977, paralyzing him. Ouzts began riding professionally in the spring …