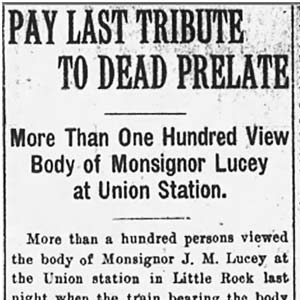 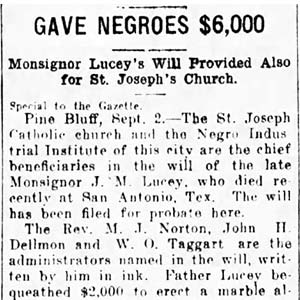 On October 4, 1877, an African-American man named Henry Jackson was shot by a masked mob near Watson (Desha County) for allegedly murdering a justice of the peace referred to only as Mr. O’Neil. However, the circumstances of the event speak to the broader efforts in post-Reconstruction Arkansas to remove black elected officials from office. While it is impossible to identify O’Neil, there were two African Americans named Henry Jackson living in Desha County in 1870. The first was a twenty-nine-year-old farmer living in Red Fork Township who had personal property worth $500 and real estate valued at $250. The second was a twenty-seven-year-old farmer who was living in Jefferson Township and had personal property worth $125 and real estate …

Joseph Walter (Joe) Jackson was a talent manager best known as the father and manager of his children’s careers, including the Jackson 5, Michael Jackson, and Janet Jackson. He was inducted into the Arkansas Black Hall of Fame in 2011. Joseph Walter Jackson was born on July 26, 1928, in Fountain Hill (Ashley County). He was the oldest of five children of Samuel Joseph Jackson and Crystal Lee King. His father was a schoolteacher. Jackson remembered that his father was one of few African Americans in the area to own a car. The elite status earned his father the nickname of “Professor Jackson.” Much of Jackson’s childhood was spent in Arkansas. However, when his parents separated, he left Arkansas at the …

Keith Jerome Jackson is a former college and professional football player and current radio broadcast color analyst for University of Arkansas (UA) in Fayetteville (Washington County) football. Jackson began working with the Arkansas Razorback Sports Network in 2000. Jackson is the founder of P.A.R.K (Positive Atmosphere Reaches Kids), a nonprofit after-school recreational and educational program for students. Keith Jackson was born on April 19, 1965, in Little Rock (Pulaski County) and grew up in a single-parent home with his mother, Gladys Jackson. He went on to become a successful high school athlete, earning letters in football, basketball, and track at Little Rock Parkview High School. A highly recruited football player, Jackson chose to play for head coach Barry Switzer at …

Travis Calvin Jackson was one of six native Arkansans elected to the National Baseball Hall of Fame. He played for the New York Giants and was considered the best National League shortstop in the 1920s. Noted for his defense (which earned him the nickname “Stonewall”), he was also considered a clutch hitter. Travis Jackson was born on November 2, 1903, in Waldo (Columbia County) to William Calvin Jackson, a storekeeper, and Etta Farrar Jackson. As a teenager, Jackson played for a team at Ouachita Baptist College (now Ouachita Baptist University) and for a semipro team in eastern Arkansas, where Little Rock Travelers manager Kid Elberfeld scouted him late in the 1921 season. Baseball was beginning to be played on Sundays … John Hornor Jacobs is a novelist whose fiction spans different elements of the horror, science fiction, supernatural, and fantasy genres. Jacobs’s home state of Arkansas features prominently in many of his works, though he has lamented the difficulty of gaining popularity in the state. Jacobs, who also works in advertising, is a strong proponent for supporting local art and artists. John Hornor Jacobs was born on January 5, 1971, in Little Rock (Pulaski County) to lawyer John Jacobs and his wife, Mary Sue Hornor. He has one sister. As a kid, Jacobs loved to frequent bookstores and libraries. He attended Central High School and received a BA in English from Lyon College in Batesville (Independence County). He also attended the …

Henderson Madison Jacoway was an Arkansas politician who represented the state’s Fifth District in Congress for six terms. First elected to the Sixty-Second Congress, he served from March 4, 1911, until March 3, 1923. Henderson Jacoway was born in Dardanelle (Yell County) on November 7, 1870, to William Dodge Jacoway and Elizabeth D. Parks Jacoway. Jacoway attended the local common schools before graduating from Dardanelle High School in 1887. He went on to Winchester Normal College in Winchester, Tennessee, earning his degree in 1892. He then entered Vanderbilt University’s law department, where he completed his degree in 1898, graduating as valedictorian. He was admitted to the bar the same year and started a private practice in Dardanelle. In 1893, Congress … Douglas Arthur James served as a professor of biological sciences at the University of Arkansas (UA) in Fayetteville (Washington County) from 1953 to 2016. He was considered the authority of the birds of Arkansas, co-authoring Arkansas Birds with Joseph C. Neal in 1986, and became one of the state’s leading conservationists in the second half of the last century, helping to start the Arkansas Audubon Society in 1955 and the Arkansas Audubon Society Trust in 1972. He arranged the first meeting of what would become the Ozark Society, which was responsible for saving the Buffalo River from damming. Starting with studies of scrubland birds in northwestern Arkansas, James expanded to studying scrubland birds in Africa, Nepal, and Belize. He was …

On May 14, 1892, Henry James was lynched in Little Rock (Pulaski County) for an alleged assault on five-year-old Maggie Doxey. According to the Arkansas Gazette, it was the first time in twenty years that “Little Rock [had] witnessed a mob or an attempt at enforcing mob law in this city.” James, described in some newspapers as a twenty-two-year-old “mulatto,” was originally from Augusta, Maine, but had moved south three years earlier. He worked for a time as a waiter in Hot Springs (Garland County), but for the two weeks prior to his murder, he had been working for the family of Charles Johnson in Little Rock. According to the Arkansas Gazette, the family found him to be “a faithful …

Jordan Jameson, an African-American man, was burned to death on November 11, 1919, on the town square in Magnolia (Columbia County) for having allegedly murdered the local sheriff. Only a handful of lynchings in Arkansas were carried out by means of burning the victim while alive, most notably the 1892 lynching of Ed Coy in Texarkana (Miller County), the 1919 lynching of Frank Livingston near El Dorado (Union County), and the 1921 lynching of Henry Lowery in Mississippi County. At the time of the lynching, Jameson was described in newspaper reports as fifty years old and living four miles west of Magnolia. The 1880 census records a Jourdan Jameson, born about 1872 and living in Magnolia at the time, while … Roland Janes was a well-known session guitar player who worked with Sam Phillips at the legendary Sun Studios in Memphis, Tennessee. He was elected to the Southern Legends Entertainment & Performing Arts Hall of Fame and the Memphis Music Hall of Fame. His guitar is in the Rock and Roll Hall of Fame in Cleveland, Ohio. Roland Janes was born on August 20 ,1933, in Brookings (Clay County) to R. D. Janes and Mary Pearl Janes; he had three brothers and three sisters. Janes learned to play guitar and performed in country bands with his cousins while living in Arkansas. His parents divorced when he was about ten, and his mother moved to St. Louis, Missouri; he shuttled back and …