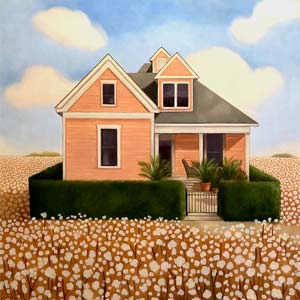 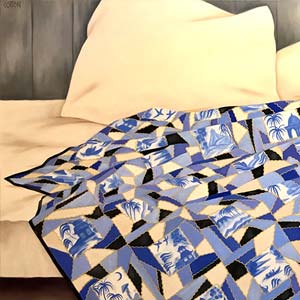 Icing on the Cake Abortion is defined as either a spontaneous early ending of a pregnancy (a.k.a. miscarriage) or an induced early ending of a pregnancy. In Arkansas, amidst changes in abortion’s legal status over the years, women have sought abortions for various reasons, including maternal and fetal health problems, financial concerns, and the stigma of single pregnancy. On March 9, 2021, the Governor Asa Hutchinson signed into law a bill that outlawed all abortions, with no exception for the termination of pregnancies due to rape or incest, save those performed to save the life of the mother in a medical emergency. Early nineteenth-century Americans confirmed pregnancy and the existence of a human life using “quickening,” a term that referred to a woman feeling fetal movements …

Annie Mable McDaniel Abrams is a retired educator and a political, social, civic, and community activist in Little Rock (Pulaski County). She was instrumental in campaigns to rename various Little Rock streets in honor of Daisy Bates and Mayor Charles Bussey. Most notably, she was a leader in the campaign resulting in the renaming of High Street in honor of Martin Luther King Jr. and in the institution of Little Rock’s first Martin Luther King Jr. Day parade. Annie McDaniel was born on September 25, 1931, in Arkadelphia (Clark County). She is the eldest of four children born to Queen Victoria Annie Katherine Reed. McDaniel’s father died when she was eighteen months old, and she was reared with the help … 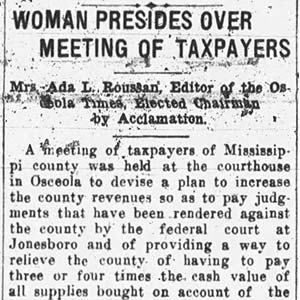 The Aesthetic Club is one of the oldest women’s clubs west of the Mississippi River. It began when a group of young women wishing to start a reading club organized on January 16, 1883, in Little Rock (Pulaski County). Aesthetic Club founders Cynthia Polk, Sallie Martin, Ida Martin, Fannie Jabine, Jane Georgine Woodruff, Mary Knapp, Gertrude Hempstead, Harriet Jabine, and Virginia Hamilton immediately expanded their objectives “to present programs of a literary, artistic, musical, and timely trend” in order to “assist in educational uplift, and to bring its members together for social enjoyment.” The name, proposed by Knapp, was borrowed from the Aesthetic Movement, which was “emulous of cultivating ‘the beautiful’ in all things.” Inspired by Oscar Wilde’s comments on …

Sarah Agee of Prairie Grove (Washington County) served as a state representative in the Eighty-second, Eighty-third, and Eighty-fourth Arkansas General Assemblies from 1999 to 2004.   Sarah Edith Sonneman was born in Fayetteville (Washington County) on January 2, 1946, to Gladys Margaret Gosnell Sonneman and Emil Herman Sonneman. Thiers was a prominent Washington County family. The Gosnells of Springdale (Washington and Benton counties) had the only bookstore in town, and reading was a prime concern for the family, which had no television. Her mother, who played the organ for the silent movies at the UARK Theater and Palace Theater and was the organist for more than fifty years at First Baptist Church in Fayetteville, was a field representative for the state Welfare Department. The Sonneman family built and operated seven movie theaters in the area, the UARK Bowl, and apartments near campus. Her father owned and operated the Fayetteville Country Club and Razorback Golf Course, supported community projects such … A nationally known women’s basketball team, the All American Red Heads formed in 1936 in Cassville, Missouri, with Connie Mack Olson as its founder and coach. Originally, the team, all sporting dyed or natural red hair, publicized Olson’s Beauty Parlors in Kansas and Missouri, and though later the team moved to Arkansas, they kept their name. The team became so popular with the sports’ crowds that the team hit the road and successfully challenged men’s teams with their trick shots, athletic ability, and “hijinks.” The Red Heads thrilled audiences all over the United States with behind-the-back shooting, back-hand passing, and athletic ability on the court. They played men’s teams using men’s rules and won seventy percent of their games. While …

Dorathy N. McDonald Allen was the first woman to serve in the Arkansas Senate, serving from 1964 to 1974 in the Sixty-Fourth through Sixty-Ninth General Assemblies. She was elected in 1964 to fill the unexpired term of her husband, Senator Tom Allen, after his death in 1963. She was reelected in 1966 and 1970 without opposition. Dorathy N. McDonald was born in Helena (Phillips County) on March 10, 1910, to Dora Barnes McDonald and Jack McDonald. Her mother was a homemaker, and her father was lumberman and sawmill owner, with one of the largest lumber operations in the area; she had four siblings. She was educated in the public schools and at Sacred Heart Academy in Helena. Her mother died …

Catherine Tharp Altvater was a nationally known watercolorist whose works were shown in numerous museums, including the Metropolitan Museum of Art in New York City. Today, her paintings are found in many private collections and museums in the United States, Canada, Europe, and Japan. Catherine Tharp was born in Little Rock (Pulaski County) on July 26, 1907, to William J. Tharp and Catherine Collins Tharp. Her maternal grandparents were early settlers of Little Rock, and her paternal grandfather, originally from Tennessee, had a private academy in Little Rock with R. C. Hall. Altvater’s interest in art began at an early age and continued throughout her school years, when she spent many hours in art classes. At the age of eighteen, …

Freda Hogan Ameringer was a journalist, Socialist Party official, and labor activist in Sebastian County; she moved to Oklahoma City, Oklahoma, during World War I. Her socialism, like that of most other Arkansas party members, emerged out of the Farmers’ Alliance and the Populist movement. She saw socialism as a fight against corporations, banks, and other concentrations of economic power that undermined the rights of the nation’s working people. Freda Hogan was born on November 17, 1892, in Huntington (Sebastian County) to Dan Hogan, who was one of the founders of the state’s Socialist Party, and Charlotte Yowell Hogan, who suffered from physical debilities. Her childhood home, which included three younger siblings, was a gathering place for socialists, feminists, trade unionists, and …

Evelyn Ammons was county and circuit clerk for Scott County from 1979 to 1994 and served in the 80th, 81st, and 82nd Arkansas General Assemblies (1995–2000) as a state representative. Evelyn Ammons was born on October 2, 1937, in Scott County to Omer Brian Ammons and Maud L. Gimlin Ammons. After Ammons’s father died when she was eleven months old, she, her two older sisters, and her mother left the farm and moved in with Evelyn’s grandmother, Hattie Sedalia Nunn Gimlin. Her mother went to work on a Works Progress Administration (WPA) program to support the family. Ammons and her family moved to Waldron (Scott County) when she was in the first grade, and she attended public schools, graduating from Waldron …

Educator, author, and lecturer Daisy Graham Anderson is best known for being one of the last surviving widows of the American Civil War (1861–1865), having been married to a former slave and U.S. Colored Regiment soldier and Union veteran. In 1998, she was inducted into the Arkansas Black Hall of Fame in Little Rock (Pulaski County). Daisy Graham was born about 1900 in Civil District 8, Hardin County, Tennessee, to John Wesley Graham and Alice Graham. She was the oldest of the eight Graham children (three girls and five boys). Her father was a farmer. Even though he was poor, he owned his home. Education was stressed to the children—both Graham’s mother and father could read and write. After graduating …

Pernella Mae Center Anderson of El Dorado (Union County) was one of Arkansas’s two African-American interviewers for the Federal Writers’ Project (FWP). She interviewed former slaves between 1936 and 1939. Pernella Center was born on April 12, 1903, in Camden (Ouachita County). She was the youngest of Willis Center and Sallie Washington Center’s ten children. Her father, a carpenter, and her mother, a housewife, were born in Louisiana but moved the family to Arkansas by 1894. Center’s mother died when Center was two years old, and her father remarried two years later. Center married her first husband, Theodore Haynie Jr., around 1920, and the couple had three children. Despite her home responsibilities, she was motivated to further her education and …