Salado is one of the oldest communities in Arkansas, with history going back to territorial days. Salado is located in the Ozark foothills about seven miles southeast of Batesville (Independence County) on Highway 14 (also called Newport Road) and about a mile southwest of the White River.

The most colorful account of town’s name stems from the oft-told tale of how a young woman named Sally was washing clothes in a creek when a deer suddenly appeared. She attacked the deer with a battling stick and brought home a doe for supper, hence “Sally killed a doe,” or “Sallydoe.” Most likely, however, the name is of Spanish or French origin. The French term “sal d’eau,” roughly translated as “salty water,” appears on early maps of the region. The town derives its name from nearby Salado Creek, which was originally called Bayou Saladore. The name Salado is pronounced with each “a” being short as in “salad,” unlike its counterpart in Texas.

Where Salado Creek empties into the White River is the location of the first post office in Independence County: White Run. The post office opened on December 29, 1819, with Peyton Tucker serving as the first postmaster. The name White Run at the time referred to the entire area along the mouth of Salado Creek, including Salado and Rosie (Independence County). A short-lived post office was founded as Rock Point in 1842, with its name changed to Saladore the same year; it changed back to Rock Point the following year. William Hammond was its postmaster. The Salado post office opened on September 29, 1884, with John M. Robertson as postmaster. Robertson later became postmaster in Rosie. The current Salado post office was built in 1976.

One of the pioneers of the White Run region was Robert Boyd Engles from Harrison County, Kentucky, who was sent to medical school but dropped out to run keel boats on the White River from Jacksonport (Jackson County) to Norfork (Baxter County); he sometimes took a keel boat all the way to New Orleans, Louisiana, on the Mississippi River. In 1858, he was one of four pilots on the steamship William M. Lawrence, which traveled from Batesville to Jacksonport and back in four days. Engleside Landing and Plantation on the north side of White River upriver from the mouth of Salado Creek was named for his brother, Henry Engles. The plantation was built in 1828–1829 and burned in 1915.

One of Robert Boyd Engles’s sons was riverboat captain Charles Morgan Engles, who started with keel and flat boats on the White River and later was licensed to operate on the Mississippi. His wife was Virginia Egner, daughter of William Egner and Sarah Jane Powell, who donated land for the Egner Cemetery, the only cemetery in Salado, and for the Egner-Power School at Brushy—what is today McHue (Independence County).

The old highway between Salado and neighboring Rosie is labeled Rock Bridge Road, as it once had a Gothic-style rock bridge that was built in 1870 across Salado Creek. The bridge collapsed during a flood in January 1958. At the time, it was considered to be one of the oldest bridges west of the Mississippi. A similar bridge once crossed Salado Creek near Pleasant Plains (Independence County) at Huff (Independence County), and people sometimes confuse the two bridges. The Rock Bridge Road was closed to through traffic, having been replaced by Highway 14.

At the beginning of the twentieth century, Salado was a small but bustling community. Besides running the post office as part of a general store, brothers Will and Jim Totty had a blacksmith shop. Bob Shelpman ran a two-story general store, with the Independent Order of Odd Fellows (IOOF) lodge holding meetings upstairs. The Wheeler store was another of the general stores in Salado in the early 1900s. Dr. Lawrence E. Reves was a noted physician of Salado at the time.

One of the most publicized criminal cases in Independence County history involved the murder of William Everett Wheeler of Salado when he was serving as chief deputy for Sheriff John Raymond “Jake” Engles, also of Salado. Wheeler was killed while the men were pursuing fugitive Robert L. Rose in the Brock Mountain area near Locust Grove (Independence County) on January 2, 1935. Rose was apprehended and thought to be in the Batesville jail but was slipped out of the county by law officers who feared a lynching by angry citizens. Rose was executed on February 23, 1935, at Tucker Prison Farm in Jefferson County. One of the three children Wheeler left behind, Gerald Bruce (Gerry) Wheeler, became a television kids’ show star, beginning his career on KARK in Little Rock (Pulaski County) as Lorenzo the Tramp (a.k.a. Lorenzo the Hobo, Lorenzo the Clown) in 1959.

Salado had its own school until consolidation with the new school of Southside (Independence County) in the 1948–49 school year. The original two-story wooden school was remodeled around 1930. The top story was eliminated, and the bottom was enlarged, with a rock veneer added. The rock building still stands in the twenty-first century, although it has fallen into disrepair. Efforts made in the 1990s to turn the building into a museum failed.

The hill land of Salado is not conducive to large-scale farming. A few people raise cattle, but most work in Batesville or Newport.

Salado entrepreneur Oran McBride began selling sandstone that he quarried using hand-made tools. Over the years, the company that he and his wife, Evelene Branscum McBride, started in 1948 became a multi-million-dollar enterprise that sells Arkansas stone all over the world. Oran and Evelene McBride also built a shopping center at Southside in about 1962, with country music stars Porter Wagoner and Norma Jean performing on top of one of the buildings during the grand opening.

R. M. Weaver of Salado became a noted realtor for the county. F. B. Headstream of Salado ran a popular skating rink in Southside with a live band playing on weekends. Cody Thomas and his wife, Patsy Ballard Thomas, were proprietors of the Southside Dairy Bar for many years; it had been built by state trooper Robert Patterson. Nelse and Ruby Davis had a grocery store on Highway 14 in Salado in the 1950s. Their daughter, Vandyne, and her husband, Owen May, built and operated a dairy bar across the street from the grocery store. The McFadden Grocery was also located in Salado in the 1950s.

Throughout most of its history, Salado had only two churches, first a Methodist, then a Baptist. A third, non-denominational church was then established in the old post office building. 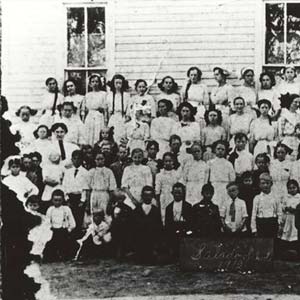