Begun as a river port significant to commerce, Pocahontas joins alluvial Delta bottom with the Ozark foothills. The town has served as Randolph County’s only county seat and continues as a strategic educational and agricultural center in the state.

European Exploration and Settlement
The first residents of the area arrived roughly 12,000 years ago. During the time of European exploration, what would become Randolph County was part of the hunting territory of the Osage, who lived in southern Missouri. French hunters probably crossed the area in the eighteenth century and established temporary camps, but no permanent settlements were developed until after the Osage surrendered their rights to the land in 1808.

The earliest documented settler was Ransom S. Bettis, who arrived from Greenville, Missouri, and built a house overlooking Black River; from 1815 to 1835, the settlement was known as Bettis Bluff. Other early residents include the following names: Black, Fine, Hanover, Hunter, Imboden, Looney, Mansker, Marr, Mitchell, Rice, White, and Schmick.

Louisiana Purchase through Early Statehood
In 1826, Thomas S. Drew immigrated to what was then Lawrence County (Randolph County was established in 1835), married Bettis’s daughter Cinderella and later became instrumental in the founding of Pocahontas. Drew served as Lawrence County judge from 1832 to 1835 and was the third governor of Arkansas (1844–1848). He died in Lipan, Texas, but was reburied in the Masonic Cemetery in Pocahontas on May 30, 1923, forty years later. More than 5,000 people assembled for his second interment.

Residents at the Columbia settlement, eight miles north of Pocahontas, tried to locate the county seat there, but Drew and Bettis craftily won favor for Bettis Bluff. On the date set to vote for the county seat, the pair provided free barbecue and alcoholic beverages on their property, the present site of Pocahontas. A majority of residents, who could vote at either site, attended and voted for Bettis Bluff, the name of which was later changed to Pocahontas for reasons that still remain unknown, though a number of theories and legends have emerged.

Three courthouses have served the county. Thomas O. Marr built the first between 1837 and 1839 as a frame structure for $2,400. It collapsed from deterioration in 1870. On April 15, 1872, John A. McKay of Helena (Phillips County) was awarded the contract to build the new courthouse, but the building was not occupied until 1875, on account of the contractor’s refusal to turn it over until his debt was paid. The structure referred to as the “old courthouse” stands on the square just north of the present courthouse, which was built in 1940 for $68,764.

Civil War through Reconstruction
After Arkansas withdrew from the Union on May 6, 1861, a Military Board met at Little Rock (Pulaski County) on May 13 to organize the state for combat. Some 10,000 men assembled at Pocahontas to secure the northern border from invasion, thus turning Pocahontas into a major recruiting, training, and supply center. Randolph County produced eight companies of men. General William J. Hardee arrived at Pocahontas to take charge on August 29, 1861. In 1862, after Confederates moved out, Union General Frederick Steele, with a division of Federal troops, occupied Pocahontas for several weeks. In 1863, Federal raiders burned a section of the town, including the newspaper office. Pocahontas, as well as other parts of the country, saw a period of stagnation and decline after the war.

In 1901, George Shivery, a white man, became the second and last person lynched in Randolph County. On March 20, 1901, he allegedly killed a town marshal, and two days later, a mob numbering as many as 500 people stormed the jail in Pocahontas and hanged him from a bridge.

Reconstruction through Early Twentieth Century
The late nineteenth century through the mid-1920s marked a golden age for Pocahontas. This period includes the hotel era and the latter end of the steamboat era, a period of “boom” after recovery from the war. Seven hotels graced Pocahontas from antebellum days until the mid-1920s, when they burned to the ground. Forty-three steamboat paddlewheels navigated the Black River at the turn of the century, making Pocahontas a strategic port of commerce; the first was the Laurel in 1829. By the end of the nineteenth century, however, steamboats were on the decline.

The Hoxie, Pocahontas, and Northern Railroad (HP&N) came to Pocahontas from the south beginning at Hoxie (Lawrence County) in 1896. The Hauk Railroading Company started track construction southward connecting Poplar Bluff, Missouri, to Pocahontas in 1902. The St. Louis–San Francisco Railway (Frisco) constructed a new railroad bridge across Black River in 1911, which was said to be the second single span bridge in the world. Ferries carried passengers and freight across the river before bridge construction. By the turn of the century, Pocahontas began to prosper once again.

Other early industries include four button factories, a brick company, Hanauer’s cotton gin, Grafton Stave and Heading Company, and Pocahontas Bending Works, which made wooden parts for wagon wheels (“hounds and fellys”) around 1901. The pearling industry continues on the White River, but silt has eliminated its operation on the Black. Sallee’s hickory handle mill, later known as Sallee Brothers, moved to Pocahontas in 1909; it ceased production in 1984.

World War II through the Modern Era
Pocahontas experienced little growth in the 1920s and 1930s. Marr’s Creek Bridge was built in 1936. In 1942, an egg dehydrating plant, which made powdered eggs for army rations, employed about 500. In 1944, Brown Shoe Company, the first shoe factory below the Mason-Dixon Line, became the largest employer in Pocahontas and doubled in size in 1955; however, it ceased production in November 1995. Other factories came in the 1960s: McGee, which produced picture frames; Aircraft Engineer, which became Waterloo; Cinch, which produced electric components for airplanes; and Pro Group. In the 1970s, Amerace ESNA, maker of lock nuts, came to Pocahontas.

Agriculture contributes $60 million to Randolph County each year, and the Farm Service Agency, begun in 1934 in Pocahontas, disperses $15 million annually to local farmers and ranchers.

Flooding has been a problem for the city in the twenty-first century. Major flooding occurred in the spring of 2011 across eastern Arkansas, including Pocahontas. Six years later, heavy rains in late April and early May 2017 filled the rivers around Pocahontas, especially the Black River, causing flooding in the lower-lying parts of the city and leading to a mandatory evacuation order being issued for the eastern part of the city on May 2. In both cases, levees on the Black River failed, spilling water into the surrounding farmland.

Education
On November 2, 1948, the School District Reorganization Act resulted in the consolidation of twenty-four school districts with the Pocahontas School District. The Pocahontas Colored School, a segregated one-room school for African Americans, functioning under the Pocahontas School Board, integrated in 1966. In 2005, about 1,800 students attended Pocahontas public schools. The private St. Paul Catholic School enrolls about 100 students through the sixth grade. Other institutions include Blackwood Beauty School and Black River Technical School, which opened in 1972 and became Black River Technical College in 1991.

Media
Pocahontas’ media include a radio station and a newspaper. The radio station began broadcasting in 1950 as KPOC AM. In 2011, Combined Media Group operates four stations: KPOC, AM; KPOC, FM–both in Pocahontas; KRLW, AM; and KIYS, FM–both in Walnut Ridge (Lawrence County).

Attractions
Several sites add to the uniqueness of Pocahontas—the Eddie Mae Herron Museum, a restored one-room African-American schoolhouse on the National Register of Historic Places; the Imperial Dinner Theatre; the Century Wall, a monument depicting the faces of more than 100 ethnically diverse people who helped shape twentieth-century America; the Historic Courthouse Square; and Overlook Park, overlooking Black River. Also located in Pocahontas is the Randolph County Heritage Museum, which features such exhibits on archaeological finds from Davidsonville Historic State Park, the Civil War, the pearling industry, and more. Pocahontas has a commercial historic district as well as a historic post office location where Depression-era post office art may be viewed.

Notable Figures
Born in Pocahontas, Wear Kibler Schoonover was an athlete and an actor in his early life and went on to serve in the Navy and the federal government. 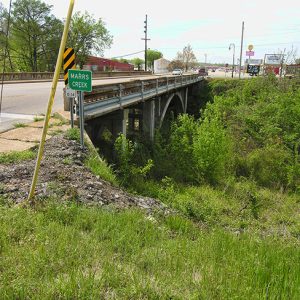