The Old Independence Regional Museum, 380 S. 9th Street, was established in Batesville (Independence County) in 1998 to serve the twelve-county region of northeast Arkansas that was included in Independence County in 1820. Detailed maps describe the region’s historic sites and museums, leading visitors to continue their journey into the other counties in the region, which include all or part of Baxter, Cleburne, Fulton, Izard, Jackson, Marion, Poinsett, Sharp, Stone, White, and Woodruff counties.

Organization of the museum began in the fall of 1991, when the Independence County Historical Society formed a museum-planning committee of sixteen people. The committee learned from museum operations experts; drafted planning documents; and created a statement of purpose, a mission statement, goals, and a set of policies. In 1993, an elected board of eighteen trustees incorporated as a non-profit organization, with Twyla Gill Wright as president. The museum received tax-exempt status in June 1994 and instituted a capital campaign.

A site-selection committee spent months searching for a location. Batesville was chosen, as it was the original Independence County seat and is centrally located in the region. The committee investigated thirty-eight lots and old buildings, settling on the historical National Guard Armory at 9th and Vine streets. The 10,000-square-foot native-stone military Gothic structure was built in 1936 as a Works Progress Administration (WPA) project to house Company L of the Arkansas National Guard. Its owners—Doyle and Raye Rogers, and Preston and Charlotte Grace—offered the building and its three city lots as a gift after the museum board raised $400,000 in gifts and pledges. Clear title to the property was granted in June 1995, and the architectural firm Witsell, Evans, and Rasco of Little Rock (Pulaski County) planned and oversaw the renovation of the historic building, which received inclusion on the National Register of Historic Places during the process.

The museum held its grand opening and dedication on September 12, 1998, after seven years of work; $1 million had been raised. Lieutenant Governor Win Rockefeller cut the ribbon. From 1999 to 2007, Jo Blatti, former director of the Harriet Beecher Stowe Center in Hartford, Connecticut, served as full-time director. Twyla Gill Wright was the founding president of the museum organization and continues to serve as curator of collections.

The museum’s collections include about 19,000 items, cataloged and accessible to the public, including transcripts of public records for the twelve-county region; nineteenth- and twentieth-century photographs; textiles, tools, and equipment; and other items documenting daily life in the region. A team of thirty volunteer docents is available to greet visitors, give tours, operate the gift shop, process collections, and assist genealogical and historical researchers. A large research wing invites visitors to search for their ancestors’ stories in public record books, archival collections, county journals, family files, and photographs. Artifacts are cataloged and stored in a locked preservation wing, and documents and public records are stored in an 800-square-foot vault with fire-safety construction.

Schools are encouraged to book tours of the museum, and educational materials are available for classrooms. The museum also plans, as funds become available, to hire an educator to present programs in schools. Brown bag luncheons with special speakers are held throughout the year. 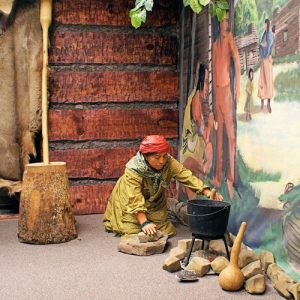