Milton Pitts Crenchaw, of the original Tuskegee Airmen, was one of the first African Americans in the country and the first from Arkansas to be trained by the federal government as a civilian licensed pilot. He trained hundreds of cadet pilots while at Alabama’s Tuskegee Institute in the 1940s and was the catalyst in starting the first successful flight program at Philander Smith College in Little Rock (Pulaski County) from 1947 to 1953. His combined service record extends for over forty years of federal service from 1941 to 1983 with the U.S. Army (in the Army Air Corps) and eventually the U.S. Air Force.

Milton Crenchaw was born on January 13, 1919, in Little Rock to the Reverend Joseph C. Crenchaw, a local civil rights leader with the local National Association for the Advancement of Colored People (NAACP) and a professional tailor, and his wife, Ethel Pitts Crenchaw, who was a door-to-door beautician. He had three siblings. Crenchaw graduated from Dunbar High School in 1937 and attended Dunbar Junior College while completing the teaching certificate in auto mechanics. He pursued a bachelor’s degree in mechanical engineering at the Tuskegee Institute in 1939 but did not complete his degree after becoming a pilot there. In 1939, Crenchaw was the first Arkansan to arrive at Moton Airbase in Tuskegee, Alabama.

After the bombing of Pearl Harbor on December 7, 1941, his focus shifted from living the life of a normal college student to flying in the Civilian Pilot Training Program (CPTP), sponsored by the Army Air Corps, and becoming a flight instructor. This was possible due to the landmark government decision of December 1940 regarding the training and inclusion of black pilots in the army. This idea was first initiated by President Franklin Delano Roosevelt and then revisited by the Department of War in response to the shortage of personnel in the aviation, pilot, and engineering sectors of government. Crenchaw received partial training and physical examinations at Maxwell Air Force Base in Montgomery, Alabama, before returning to Tuskegee for another phase of primary instruction and advance courses in aviation piloting. He graduated with his civilian pilot license and then commercial pilot certificate on August 11, 1941. Crenchaw became a primary civilian flight instructor and eventually one of the two original supervising squadron commanders under Chief Pilot Charles A. Anderson. He and Charles Foxx were the first instructors for the first group of student pilot trainees between 1941 and 1946.

Crenchaw married Ruby Hockenhull in Tuskegee on December 22, 1942; they had four children.

Early in his career, Crenchaw worked as a civilian pilot training officer contracted by the military. Crenshaw instructed scores of pilots and cadets, including Judge Robert Decatur, Charles Flowers, Lieutenant Colonel Charles (Chuck) Dryden, Earl V. Stallcups, and fellow Arkansan Woodrow Crockett. After the end of his tenure at Tuskegee, he served as a flight instructor at several airbases, including Fort Sill in Oklahoma (1953–1954), Camp Rucker (now Fort Rucker) in Alabama (1954–1966), and Fort Stewart in Georgia (1966–1972). While at Camp Rucker, Crenchaw became the first black flight instructor, and he trained other instructors. Others under him at Tuskegee followed; Sherman T. Rose and James E. “Muscles” Wright were both employed with Crenchaw in Alabama’s predominately white airbase, Camp Rucker.

In 1947, Crenchaw returned to Little Rock, where he presented an idea to then-president of Philander Smith College, Dr. M. L. Harris, regarding the implementation of aviation/piloting courses. Harris agreed, and Philander Smith held such classes at Little Rock’s Adams Field (now the Bill and Hillary Clinton National Airport) in the building of the Central Flying Service. Crenchaw taught aviation at Philander Smith from 1947 to 1953. He was also employed by the Central Flying Service and worked as a crop-duster in the central Arkansas and Delta regions.

In 1972, with over 10,000 hours on record logged in the air, Crenchaw was signed on as an equal employment opportunity officer with the Department of Defense and as a race relations officer at Fort Stewart in Georgia until 1983. He was also involved with U.S. Senator Mark Pryor and U.S. Congressman Vic Snyder regarding educational programs and veterans’ benefits; he actively pushed for veterans’ status for individuals who were involved in various service capacities at Tuskegee, including cooks, groundskeepers, medical assistants, support personnel, and flight instructors.

Crenchaw was inducted into the Arkansas Aviation Hall of Fame in 1998. On March 27, 2007, he was honored by Governor Mike Beebe for his historic efforts as a Tuskegee flight instructor and service to his country. On March 29, 2007, Crenchaw, along with the other members of the Tuskegee Airmen, was awarded the Congressional Gold Medal by President George W. Bush in Washington DC. The Tuskegee Airmen are the largest group to ever receive this medal. Crenchaw was inducted into the Arkansas Black Hall of Fame on October 27, 2007. He died on November 17, 2015, in Atlanta, Georgia.

Washington, George C. The History of the Military and the Civilian Pilot Training of the Negroes at Tuskegee, Alabama, 1939–1945. Washington DC: George C. Washington, 1972. 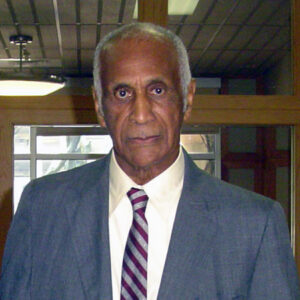