Seventeen Arkansas National Guard armories were built through a program authorized by Act 271 of 1925, which created a “Military Fund” for building armories, and many others were constructed during the Great Depression through New Deal agencies such as the Works Progress Administration (WPA). During the Cold War era, Congress passed the National Defense Facilities Act of 1950, which appropriated money for renovation and erection of Reserve Armed Forces facilities, including some in Arkansas. In 1953, Brigadier General John B. Morris Jr. estimated that Arkansas’s armory needs totaled $3,705,000. The U.S. government would provide $2,778,750, while the State of Arkansas was to contribute $926,250.

Many of the Arkansas armories were designed by the Little Rock (Pulaski County) architectural firm Wittenberg, Delony and Davidson, which developed a “type ‘Z-Z’ one unit” plan in which office space, restrooms, storage facilities, and kitchens were built one story high, with concrete block and brick veneer and a flat roof. Drill halls were built with a two-story-high steel frame topped by a gable roof with several awning windows on each side. Though it is not confirmed that the McGehee armory follows this exact plan, it is similar in construction.

Requests for bids to construct the new, 7,400-square-foot building were issued on January 2, 1954, and Townsend Construction Company of Conway (Faulkner County) submitted the low bid of $38,399.70. The plumbing and heating contract went to Daniel Zero Butane Company of Beebe (White County) on a $3,900.20 bid, while the contract for electrical work went to Pine Bluff Electric Company for its bid of $2,475. The armory was to be built on land that had been the site of the 1952 Desha County fair; the land was purchased with money raised by McGehee merchants and citizens. Governor Francis Cherry, accompanied by Major General Lucien Abraham, attended the groundbreaking ceremony on February 18, 1954, and the structure apparently was completed later that year.

On June 28, 2005, it was announced that five Arkansas National Guard armories would be closed, including the one at McGehee, as part of a major restructuring of the Guard. Officials indicated that the closed armories would be given to the cities in which they were located for future use as municipal facilities. Governor Mike Huckabee formally handed the deed to the armory over to the city on March 14, 2006. The City of McGehee later transferred the armory to the C. B. King School, a school for the disabled, which uses it as a day treatment center. The McGehee National Guard Armory was listed on the National Register of Historic Places on March 31, 2006. 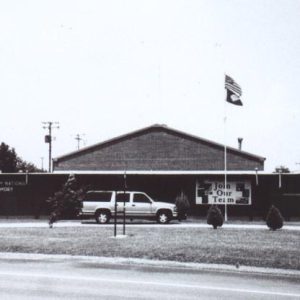