McGehee (Desha County) is a small town located in southeast Arkansas. It had its beginnings as a hub of transportation—the railroad branched from it in four directions. Its progress has mirrored that of the railroads, growing during the railroad boom and declining as the railroad declined. Transportation is once again bringing hopes of prosperity, with the Yellow Bend Port on the Mississippi River and the possibility of the Interstate 69 corridor—a highway connector between Quebec, Canada, and Mexico City, Mexico—becoming a reality.

Louisiana Purchase through the Gilded Age
Benjamin McGehee came from Alabama in 1857 and settled in southeast Arkansas in what was then Chicot County. Benjamin brought with him his wife, Sarah, and his three children. The McGehees, like most settlers at that time, were subsistence farmers. At the time, there was not an easy way to get products to market, and there was no major cash flow into the area.

In 1878, the Little Rock, Mississippi River and Texas Railway railroad came to McGehee. The railroad provided transportation to markets in four different directions. It went to Memphis, Tennessee; Little Rock (Pulaski County); Tallulah, Louisiana; and Alexandria, Louisiana. The railroad became a major mode of transportation and was a boost to area farmers, providing better markets for their crops. The major crop at that time was cotton. As farmers began growing larger crops of cotton, more cash became available to spend on things other than necessities. Abner McGehee, son of Benjamin McGehee, owned the land surrounding the railway. Abner took advantage of the opportunity the railroad presented, and around 1878 he opened a commissary to serve the people. The first post office was established in this commissary, and McGehee was named as the first postmaster on March 8, 1879. The area developed into a thriving community.

Early Twentieth Century
Through the years, the combination of agriculture and the railroad provided steady growth. Small groups of black and white students met in church buildings for school. One of the first churches was the African Methodist Episcopal Church, followed by the McGehee Methodist Episcopal Church, which was organized in 1905 by the Reverend John Lewis Cannon. On March 5, 1906, McGehee was incorporated into a city and named for Abner McGehee. A permanent school building was also erected that year. Around 1910, a major change took place when the railroad shops or “round houses” were moved from Mer Rouge, Louisiana, to McGehee. Many of the railroad workers moved their families to the new city, and the population began to grow.

Several religious groups began churches in the area during the early years. First Baptist Church was founded in 1909. Beginning in the 1920s, the Jewish community held services in local homes. This continued until 1947, when Temple Meier Chayim was built to provide a permanent home for the congregation. The Church of Christ also met in homes beginning in 1923. In 1928, a building was erected for the congregation. First Presbyterian Church was organized in 1911 and has met in the same location since that time. The Catholic church began with fifty members and was established in 1906.

The first newspaper, the Desha County News was founded in 1910. The McGehee Semi-Weekly Times was published on April 21, 1925. Stuart Publishing Company was the printer for the paper under the direction of editor Baron B. Lantrip. In 1927, the Desha County News became part of the Times. The paper became a weekly during the 1930s. For about three months starting in 1943, operation of the paper was suspended due to a shortage of labor. Publication resumed in March 1944. In April 1974, the McGehee Times merged with the Dermott News and has continued as one publication.

McGehee was devastated by the Flood of 1927, which covered all of Desha County with water ranging from four to thirty feet in depth. This flood came in April and remained until early summer. Many families evacuated to communities in neighboring counties. A few families moved to the second stories of office buildings. McGehee did not recover from this event until after the Depression. Many farmers lost all they had because of the flood and the Depression that followed. Several of the Jewish leaders in the community pooled their money to assist the farmers. As the farmers began to get back on their feet, agriculture once again was able to strengthen the economy of the area. Cotton was still the major cash crop.

McGehee has seen several lynchings in its history. In 1894, three African-American men were hanged for allegedly murdering a local merchant. In 1907, a black man named Sam Fleming was lynched after winning a fist fight with a white man. In 1921, an African-American teen was hanged from a telephone pole after what may have been a misunderstanding that escalated.

World War II through the Faubus Era
During World War II, a Japanese-American internment camp was located nearby in the town of Rohwer (Desha County). The presence of this camp did not affect the economics or growth of McGehee because the internees had very little money to spend, and their needs were provided for by the government. Internees also found it difficult to leave the center. A museum dedicated to the history of the interment opened in McGehee in 2013.

After organizing federal funds and additional state funds, McGehee built a National Guard Armory in 1954. It functioned as such until 2006 when it closed, was given to a local school, and listed on the National Register of Historic Places.

Modern Era
After many years of economic difficulty, river transportation opened the door for a new beginning. The Cypress Bend Mill of the Potlatch Corporation was completed in 1977 and brought many new jobs to the area. In 1994, the Yellow Bend Port opened on the Mississippi River, with the potential to attract industry that will use the Mississippi River for transportation of goods. Agriculture remains a strong factor in the economic development of McGehee. Cotton continues to be the main crop, but rice and soybeans are also important to the economy.

Education
Since 1906, when the first permanent school building was built, there has been a strong educational system in McGehee. About twenty-five to forty-five percent of the population of McGehee has been black, and, as was the case in almost all of Arkansas, the McGehee schools were racially segregated. In the fall of 1970, the McGehee School system became totally integrated.

In September 1975, Great Rivers Technical Institute (GRTI) opened its doors. GRTI made occupational education accessible to a seven-county area. In July 2003, GRTI officially merged with the University of Arkansas at Monticello (UAM) and became the UAM College of Technology–McGehee (COT-McGehee). COT-McGehee offers classes to help students obtain a high school diploma and college-level freshman and sophomore classes that can be transferred to a four-year university. It also offers technical classes such as nursing, automobile repair, welding, EMT training, agriculture, heavy equipment training, and business courses.

Famous Residents
Gail Davis, born Betty Jeanne Grayson, spent her childhood in McGehee and went on to become famous as television’s Annie Oakley. Frank D. Hickingbotham grew up in McGehee and graduated from UAM. He went on to found TCBY Enterprises, Inc., the world’s largest retail distributor of frozen yogurt products. Wallace Coulter, an inventor and co-founder of a worldwide medical diagnostics company, grew up in McGehee. Dwane Powell, a native of McGehee, was a nationally known political cartoonist. Bobby McGee of McGehee is an actor and has appeared in television shows such as The Fresh Prince of Bel-Air; ER; Sister, Sister; and Hanging with Mr. Cooper. He has also appeared in films such as Tales from the Hood (1995), Misfit Patrol (1998), Lost in the Pershing Point Hotel (2000), and Little Richard (2000). Robert Blair Stobaugh, born in McGehee, is considered an authority on energy, international business, and corporate governance; he is a retired professor from the Harvard Business School and he has also advised several presidents. 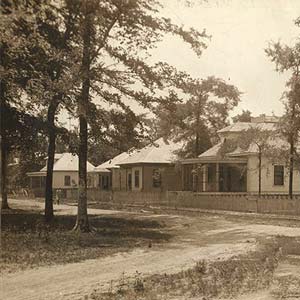