KBTM was among Arkansas’s early radio stations, with the AM frequency (1230) officially hitting the air in Paragould (Greene County) in March 1930, though the family that operated it had begun making periodic broadcasts six years earlier. The station proved to be extremely popular and, within a few years, moved to the larger city of Jonesboro (Craighead County). In 1947, an FM sister station (101.9) was put on the air with the same call letters, making it what is believed to be the first licensed FM station in the state. Generations of broadcasting students at Arkansas State University (ASU) received their first professional experience at the stations, with many going on to have long careers in the industry.

The birth of the original station can be traced to Jay Palmer Beard, who, as part of a project for a Boy Scout merit badge, built a small radio receiver, and then built a transmitter in 1924 based on drawings he found in a hobby magazine. His family owned a music store in Paragould called Beard’s Temple of Music, which sold instruments, phonograph players, and phonographs, and was considering adding radios to its line of merchandise. His father, W. J. Beard, realized the value of a station during the infancy of radio and had someone build a more powerful transmitter, which the family operated on an irregular basis.

In 1928, a representative of the Federal Radio Commission visited the store and told the Beards that they needed to get a broadcasting license if they wanted to continue operating the station. The official assisted with the paperwork, and the station received a construction permit the following year. The assigned call letters were KGKZ, but a request was made that they be changed to KBTM, with the BTM standing for Beard’s Temple of Music.

Jay Beard initially conducted the broadcasts and sold advertising but added staff as the station began to prosper, broadcasting live local musical performances and news. The station proved to be especially important during emergencies such as storms and the massive Flood of 1937. During World War II, KBTM aired reports all hours of the day and night via the Mutual Broadcasting System. An extremely popular local news program on the station was The Morning Herald, which was hosted for decades by Clarence Adams.

In 1942, the studios and offices were moved to a new building at 603 Madison Street in Jonesboro, where they would remain for more than half a century. Jay Beard sold the AM and FM stations in 1954. In 1979, he was awarded the Arkansas Broadcasters Association’s Pioneer Award. In an interview with the Arkansas Gazette at that time, Beard said, “I think I timed everything just about right. I began when radio was still magic—voices through the air—and I quit when I was still young enough to enjoy my retirement.”

KBTM-AM/FM was sold to Harold E. King, who also owned KGHI (AM 1250) in Little Rock (Pulaski County). Four years later, in 1958, King sold the stations to Alan and Carter Patteson, who operated them for thirty-five years.

Even though Beard had sold the stations, he retained ownership of the building that housed them (still called the KBTM building in the twenty-first century), with the later station owners paying him rent.

In the 1950s and 1960s, the AM station featured block programming, playing various forms of music at different times of the day. The FM was automated as much as possible to try and sustain it since relatively few people at the time had FM radios. The format was easy listening, with stacks of records alternating on two turntables.

In a 2011 interview, Alan Patteson said that the FM station was not a source of revenue in the 1950s and 1960s and that many companies with FM licenses were relinquishing them. “I don’t know why, but we didn’t want to give up our FM, which turned out to be a good thing,” Patteson said. “Over a period of years it turned around and the AM became the lame duck and FM blossomed.”

Dennis Rogers became one of the most familiar voices on the stations, working there five different times between 1965 and 1993. He went from being a high-energy Top 40 disc jockey on the AM to a mellow progressive-rock DJ on the FM. As FM became dominant, the signal was upgraded to 100,000 watts in 1974, with Rogers on the air that first evening.

Another of many noteworthy people to broadcast on KBTM was Randy Hankins, who started as a college student in 1969 and eventually became the morning host on the AM frequency. Using the air name Craig O’Neill, he eventually worked for several Little Rock radio stations and became a television news anchor at KTHV. While Hankins got his broadcasting degree from ASU, he said in a 2011 interview that “you got more education at a small town station doing a hundred different things… Whoever worked at KBTM came out of there with a general understanding of just about every facet of radio. If you got the KBTM degree, that was the one that was gold.”

The FM station changed its call letters in 1982 to KJBR, with the JBR standing for Jonesboro, and the station was branded as J-102. The change coincided with both stations switching to satellite automation. That meant the DJs were not local and sounded rather generic as they were heard on stations across the country. The FM at that time played soft rock, while the AM broadcast big band music. In 1988, increased competition from other stations in the market led to a change in format to Top 40, with the FM station becoming known as Super Hits 102. The station also hired a full staff of local DJs to be live on the air 24/7.

In the late 1980s, the FM station was at risk of being downgraded to a lower power by the Federal Communications Commission because of new minimum standards for a 100,000 watt station. (The signal was being broadcast from a relatively short tower shared with the AM station’s transmitter, which was not considered ideal.) To comply with the new standards and maintain its financial value, the station purchased thirty-five acres of land north of Jonesboro where a 1,089-foot tower was constructed in the fall of 1989. That made KJBR the tallest tower of all northeastern Arkansas radio stations and greatly expanded its coverage area.

With the upgrade, which also included new studio equipment, there was a feeling that the station needed a rebirth and new image, and it was rebranded as Power 102. KJBR played a hard-edged mix of Top 40 music, including rap and heavy metal, while KBTM evolved into a talk station, airing nationally syndicated programs. It also broadcast St. Louis Cardinals baseball games, and by that time KBTM had become the second-oldest Cardinals affiliate station in the country.

In the 1990s, the radio industry was substantially deregulated. Up until then, a company was limited to owning one AM and one FM station in each market. But as restrictions were loosened, Larry Duke, who owned Jonesboro country station KFIN, bought KJBR and KBTM from the Patteson family. He brought in a new station manager who changed KJBR’s call letters to KIYS, which was called Kiss-FM, and played a softer Top 40 format called adult contemporary.

During the corporate consolidation frenzy of the late 1990s, the stations were bought by Clear Channel Communications, which was the nation’s largest owner of radio stations. The company decided to take the powerful 101.9 signal off the air so that a lower-powered station could be put on the air at the same frequency in Memphis, Tennessee. While it was the end of the first FM station in Arkansas, it could generate more money for its owner by being in a larger market.

The cluster of remaining Jonesboro stations owned by Clear Channel, including KBTM, was eventually sold as part of a corporate strategy to focus on larger markets. KBTM and its sister stations are owned by East Arkansas Broadcasters in the twenty-first century. KBTM-AM airs national politically conservative talk programs and is rebroadcast on a low-power FM subcarrier at 101.3. 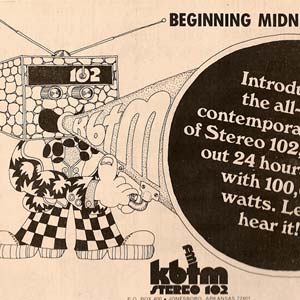