The Junction Bridge is a lift-span bridge crossing the Arkansas River between downtown Little Rock (Pulaski County) and North Little Rock (Pulaski County). One of six bridges linking the two downtowns, the Junction Bridge was originally constructed as a railroad bridge in 1884; it was rebuilt in 1970, then converted to serve as a pedestrian bridge in 2008. Its southern end rests upon the geological feature that gave the city of Little Rock its name.

The Little Rock, Mississippi River and Texas Railroad and the Little Rock and Fort Smith Railroad created a partnership in the early 1880s, envisioning a route that would stretch from the Gulf Coast to the Indian Territory (present-day Oklahoma). A new bridge across the Arkansas River was a key component in the plan, as the Baring Cross Bridge was the only railroad span crossing the river from the capital at the time. The companies opened a stock offering on the new Little Rock Junction Railway and Bridge Company on November 23, 1883, and incorporated the firm on December 8.

The company hired Union Pacific consulting engineer Major T. E. Sickles to oversee construction of the bridge and began preparations to build piers for the structure on February 4, 1884, even as it awaited permission from the U.S. War Department to pursue the project; approval came eight days later. The first load of timber for the bridge arrived at the point of rocks on the Arkansas River on March 3, and the workers shared a bottle of wine to toast the new bridge.

Construction of piers by the Anderson & Barr firm began in April, which involved the building of caissons followed by the removal of river mud until bedrock was reached and concrete could be poured to make the piers. The project continued through the summer of 1884, with the iron and steel superstructure built by the Union Bridge Company. It was marred by a pair of accidents, however. On September 25, a boiler used to power a derrick exploded, scalding an engineer and injuring several workers with debris. On November 24, several workers fell from a span of the bridge. One worker was killed and two were injured in the accident.

The Junction Bridge was completed on December 8, 1884, and a celebratory train filled with railroad officials and guests crossed to the north side of the river, unloaded its passengers, and then returned with a load of cotton. The finished structure featured five stone piers sunk to an average depth of forty-five feet and was a total of 1,258 feet long; its total cost was around $400,000. The Arkansas Gazette stated upon the bridge’s completion that “as the result of the work of the past few months, we now have an unbroken line of railway from Fort Smith on the western border of the state, to Arkansas City, on the Mississippi river.” An extra floor was added to the Junction Bridge in January 1885 to accommodate pedestrian and wagon traffic.

In 1917, Pulaski County officials negotiated a deal with the Missouri Pacific Railroad to refloor the bridge to accommodate use by heavier vehicles in addition to rail traffic, and the Junction Bridge became the major public bridge between Little Rock and Argenta (now North Little Rock) until the Broadway Bridge was constructed five years later. The Junction Bridge was rebuilt in 1970 when its swing span was replaced with a lift span to better serve river traffic in the McClellan-Kerr Arkansas River Navigation System. The U.S. Army Corps of Engineers paid Johnson Construction Company of Minneapolis, Minnesota, $833,000 to rebuild the bridge piers, then paid the American Bridge Division of U.S. Steel $2.4 million to replace the span. The Missouri Pacific Railroad contributed $1 million to the project. Most trains had stopped using the Junction Bridge by 1985, though Quality Feed Mills and about fifty other customers in North Little Rock used it into the 1990s. In 1999, the Pulaski County Bridge Facilities Board executed a ninety-nine-year lease to rehab it as a pedestrian and bicycle bridge.

The $5.8 million rehab project resulted in the 360-foot lift span being permanently fixed at thirty-eight feet above the river, with access provided by stairs or a glass-enclosed elevator. About eighty percent of the project was supplied by federal funds, with Little Rock, North Little Rock, and Pulaski County providing the remainder, as well as ongoing maintenance funding. The Junction Bridge was dedicated for its new use on May 17, 2008, and serves as an important link in the Arkansas River Trail system.

Post-Reconstruction through the Gilded Age, 1875 through 1900
Transportation 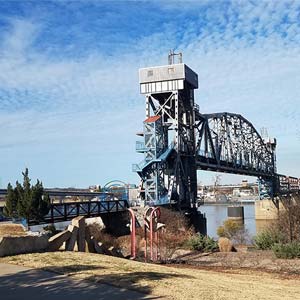 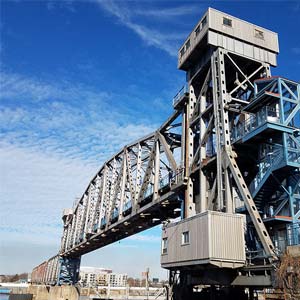 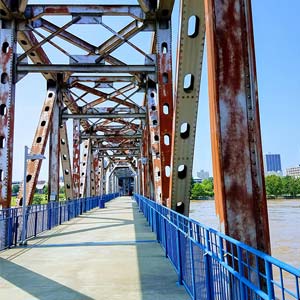 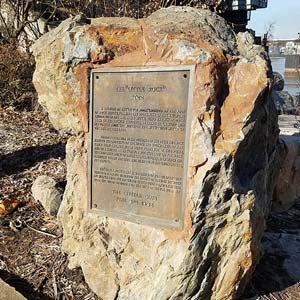