Janet McCain Huckabee is the wife of Mike Huckabee (the forty-fourth governor of Arkansas) and was the state’s thirty-ninth first lady. Outside of politics, she became best known for her work with Habitat for Humanity and the American Red Cross.

Janet McCain was born in Lake Charles, Louisiana, on July 16, 1955, to Angus Bouie McCain, who was an oilfield worker, and Pat Potter McCain, who was a homemaker, a businesswoman, and later a politician. She moved to Hope (Hempstead County) as an infant, where her mother raised her and her siblings after her parents’ divorce. Her mother later married Johnny House. She had two brothers, Tal McCain and Mike McCain; two sisters, Susan McCain Hinger and Kathy McCain; and a step-sister, Patty House. McCain’s mother was elected as Hempstead County clerk in 1966 and served three terms until 1973. McCain and her siblings were active participants in their mother’s campaigns, encouraging McCain’s interest in politics.

McCain was star basketball player at Hope High School, where she dated Mike Huckabee, who was a well-known campus leader, minister, student council president, and disc jockey on KXAR radio station. The two, who had known each other since junior high school, dated into their freshman year in college at Ouachita Baptist University (OBU) in Arkadelphia (Clark County). The Huckabees were married on May 25, 1974, in the House family home. They had three children: John Mark Huckabee, an actor and producer; David Huckabee, a mortgage broker; and Sarah Huckabee Sanders, a political consultant who served as press secretary to President Donald Trump from 2017 to 2019.

Within two years of her marriage, Janet Huckabee was diagnosed with spinal cancer. She underwent surgery to remove the cancer but was unable to return to college afterward. She later returned to college near the end of her husband’s time as governor and earned her undergraduate degree in organizational management from John Brown University in Siloam Springs (Benton County).

For many years, she lived the life of a Southern Baptist pastor’s wife, moving to locations such as Arkadelphia; Fort Worth, Texas (where her husband attended Southwestern Baptist Theological Seminary and worked for the James Robison Crusade); Pine Bluff (Jefferson County); and Texarkana (Miller County). The Huckabees also helped establish KBSC television station in Texarkana. While in Texarkana, where Mike Huckabee pastored Beech Street First Baptist Church, Janet Huckabee was active in the Texarkana Parent Teacher Association, of which she served as president for two terms. She also was employed by the Texarkana School District as a substitute teacher, at St. Michael Hospital, and as a pharmacist’s assistant. She was an active campaigner in her husband’s unsuccessful race for the U.S. Senate in 1992 and his successful special-election race for lieutenant governor in 1993.

After Mike Huckabee became governor in 1996, she became active in the effort to modernize the Governor’s Mansion in Little Rock (Pulaski County), which had gained international exposure during Bill Clinton’s governorship, presidential campaign, and presidency. In spite of some commentators poking fun when a triple-wide mobile home was placed on the mansion grounds during the renovation, the final product was a showplace that prominently featured a new grand hall (later named the Janet M. Huckabee Grand Hall), with such features as the “Arkansas Chandelier,” containing twenty-five lights and twenty-five stars (symbolic of Arkansas being the United States’ twenty-fifth state), beaded crystal apple blossoms, a beaded crystal honeybee, bronze pine cones, diamond-shaped crystal prisms commemorating Arkansas’s legacy of diamond mining, and two large native crystal pieces mined in Garland County. Another feature was a staircase runner featuring the last names of each of the governors who have resided in the mansion since it opened in 1950. Huckabee won wide praise for her extensive efforts.

Billed in the media as the “First Tomboy,” Huckabee engaged in such activities as skiing, jet skiing, swimming, playing basketball, and learning how to fly an airplane, as well as bungee jumping and performing a parachute drop from an airplane. She even shot a grenade launcher while at a National Guard training camp, in her words, “hitting the target two out of three times.” To help promote a conservation sales tax in 1996, she jet-skied down the length of the Arkansas River. Amendment 75, a 1/8-cent sales tax that benefited the Arkansas Game and Fish Commission, the Department of Arkansas Heritage, the Department of Parks and Tourism, and the Keep Arkansas Beautiful Commission, was approved by voters. In recognition of that effort, Huckabee was inducted into the Arkansas Outdoor Hall of Fame in 1998.

She sought public office herself in 2002 as her husband sought a second full term as governor, seeking to win election as secretary of state. Her husband was reelected, but she lost to outgoing State Commissioner of Lands Charlie Daniels. After earning her degree at John Brown University, she worked in a management capacity for Hanke Brothers Siding Company of Hot Springs (Garland County), until her husband began the first of his two unsuccessful campaigns for the U.S. presidency in 2008.

Huckabee and her husband began living in Florida around 2010. She has been active with her husband in various business, religious, and political activities, as well as continuing her efforts with Habitat for Humanity and the American Red Cross. Beginning around 2015, she also worked with other Arkansas first ladies in fundraising efforts to preserve and upgrade the First Ladies’ Inaugural Gown Exhibit at the Old State House Museum in Little Rock, which reopened to the public in September 2018. 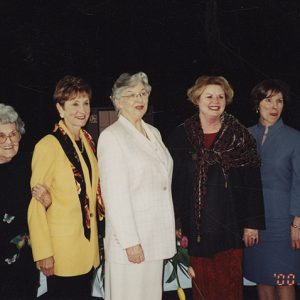