James Byron Reed was a Democratic member of the U.S. House of Representatives. He represented the Sixth District of Arkansas in the Sixty-eighth through the Seventieth Congresses, serving from 1923 to 1929.

James B. Reed was born near Lonoke (Lonoke County) on January 2, 1881, to William R. Reed and Georgia A. Reed. He attended the local schools as well as Hendrix College in Conway (Faulkner County) before ultimately graduating from the law department of the University of Arkansas (UA) in Fayetteville (Washington County) in 1906. He was admitted to the bar that same year and began a private practice.

He also ventured into politics, winning election to the Arkansas House of Representatives, where he served in 1907. Reed was the prosecuting attorney of the seventeenth judicial district of Arkansas from 1912 to 1916. Reed returned to private practice, but he remained involved in Democratic Party politics, being named a Democratic presidential elector in 1920.

In 1923, in a special election to fill the seat vacated by the sudden death of Lewis Sawyer, Reed ran for a seat in the U.S. House of Representatives. Running as a Democrat, he defeated Colonel Samuel Fordyce in the party primary before running unopposed in the general election, thus winning election to the Sixty-eighth Congress. Reed was a member of the Committee on Irrigation and Arid Lands and the Committee on Irrigation and Reclamation. After running unopposed in the 1926 general election, Reed was denied re-nomination in 1928 when he was defeated by attorney David Glover in the Democratic primary.

During the 1928 election season, his son, James B. Reed Jr., was involved in a car accident. He was en route with a girlfriend to a homecoming celebration for Senator Joseph T. Robinson, the party’s vice-presidential nominee, when their vehicle plunged off a bridge and into a swollen creek. Immediately behind the car, heading to the same event, were Governor Harvey Parnell and Charles G. Miller, who was Senator Robinson’s brother-in-law. Having witnessed the accident, they were able to rescue the youngsters from the sinking car.

After his defeat, Reed returned to Arkansas with his wife, Dora B. Jones Reed. He died on April 27, 1935, in Little Rock (Pulaski County). He is interred in Lonoke Cemetery in Lonoke. 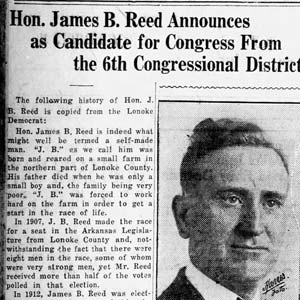