James Comer was a prominent Little Rock (Pulaski County) lawyer and Republican Party leader in the early 1900s who became, in the 1920s, Arkansas’s head of the reorganized Ku Klux Klan (KKK).

James A. Comer was born on September 18, 1866, in East St. Louis, Illinois, to John F. Comer and Hester Perry Comer. He graduated from what became Valparaiso University in Indiana. On June 1, 1893, he married Elma Coble of Delphi, Indiana, and the couple had two sons, James Omer Comer and Eben Darwin Comer.

Soon after their marriage, the couple moved to Little Rock, where Comer managed the Union Pacific Tea Company. He was admitted to the Arkansas bar in 1897. Thereafter, he practiced law and co-owned a furniture store in downtown Little Rock with his younger brother, Omer J. Comer. The Comers were members of First Christian Church (Disciples of Christ) and were active in numerous civic and fraternal clubs.

During the first two decades of the 1900s, Comer was associated with the local Republican Party. In 1912, however, he led a defection of Arkansas Republicans from support of the incumbent president, William Howard Taft. He was elected as the chairman the Arkansas unit of Theodore Roosevelt’s Progressive Party—or, as it was more commonly known, the Bull Moose Party. He even hosted Roosevelt when the former president made two campaign tours through Arkansas, in April and September, before both Taft and Roosevelt lost to the Democratic nominee, Woodrow Wilson. The Bull Moose Party dissolved in 1916, and Comer rejoined the Republican Party.

In 1921, recruiters from Texas arrived in Little Rock to organize chapters of the revived Ku Klux Klan. Comer became one of the charter members of the state’s earliest and largest Klan chapter, the Little Rock Klan No. 1. Its membership elected him as its leader, or Exalted Cyclops. In 1922, he was appointed as head, or Grand Dragon, over all Klan chapters in the Realm of Arkansas. The Klan grew quickly in the following two years, and Comer presided over an empire that included at least 152 chapters in the state. The Little Rock Klan numbered approximately 8,000 at its height, while membership statewide reached 75,000 to 100,000.

In the fall of 1922, Comer was among a small number of Klan leaders who wrested control of the national Klan from its founder William Simmons and invested a Texas dentist, Hiram Evans, with the top post of Imperial Wizard. Thereafter, Comer was in the Klan’s inner circle, the executive council. This body, the Kloncilium, revised the Klan’s financial structure to give Grand Dragons a cut of membership dues. Comer was amply rewarded in other ways. Evans tasked Comer to make plans for a women’s auxiliary, and Comer chartered the Women of the Ku Klux Klan (WKKK), with its headquarters in Little Rock, in June 1923. He secured the Imperial Commander role for a Little Rock woman, Lulu Markwell. When she resigned the next year, he pushed forward a stenographer in his law office, Robbie Gill, as Imperial Commander. In 1924 he chartered a Klan auxiliary for foreign-born white Protestants, the American Krusaders, with his office as its national headquarters. He also served as vice president of a Klan insurance company. Comer became a wealthy man through various income streams associated with the Ku Klux Klan.

The decline of the Arkansas Klan began in 1924 when Comer attempted to take control over the state Democratic Party. In municipal and county elections in 1922, Comer had managed a Klan takeover of offices in Pulaski County and the city of Little Rock. He aspired to do the same in the state elections of 1924. Several Democrats, however, even some Klansmen, opposed the meddling by a former Republican activist in the affairs of the Democratic Party. Most of the Klan-endorsed candidates were defeated in 1924.

The political disaster brought challenges to Comer’s leadership in the Klan. He was replaced as Exalted Cyclops in May 1924 by a Little Rock automobile dealer, Robert Cook, who promised to keep the Klan out of politics. A scandal unfolded the next year following Comer’s marriage to Gill. Some WKKK members sued the Comers for violating the constitutional process for succession and, moreover, charged both husband and wife with financial mismanagement. Most members of the Little Rock Klan No. 1 and WKKK chapter seceded and established an independent rival Klan. Numerous legal battles over property kept the negative publicity before the public, and membership dramatically declined.

James Comer remained Grand Dragon of the Arkansas Klan, serving under the appointment of Imperial Wizard Evans, but by the later 1920s, the organization was just a fraction of its former self. Comer died of a stroke at his home in Little Rock on August 5, 1935. He is buried beside his first wife at Roselawn Memorial Park. 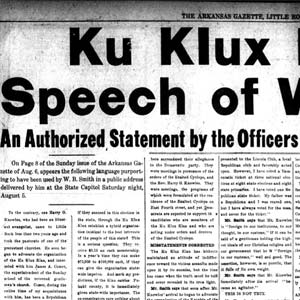