Shortly after experimental forests were authorized for the U.S. Forest Service (USFS)—an agency of the U.S. Department of Agriculture (USDA)—by the McSweeney-McNary Forest Research Act of 1928, the Ouachita National Forest (ONF) reached out to the USFS’s Southern Forest Experiment Station (SFES). The ONF staff members wanted the SFES to develop an experimental forest to help them learn about managing the shortleaf pine (Pinus echinata)–dominated forests of the Ouachita Mountains in Arkansas. In early 1931, the SFES dispatched a three-man crew to examine possible locations on the ONF, but they did not find any areas they thought were suitable for silvicultural research. The ONF and the USFS’s Washington DC office persisted, and a few years later the SFES suggested an experimental forest on a large tract of virgin and cutover timber along the Irons Fork Creek in Polk and Scott counties just west of the Montgomery County line.

Rather than timber management, this new 8,978-acre experimental forest focused on the study of “forest influences” (the effects of forests on water, soil, and climate) as presented in a September 1935 plan developed by H. G. Meginnis, a nationally renowned Mississippi-based SFES researcher. Meginnis’s plan concentrated on a series of related studies on land surface conditions and vegetation treatments influencing water movement in the Ouachita Mountains. Of particular interest were studies on flooding and its control. Even when relatively undisturbed, Ouachita watersheds were known to flood because of the inability of the shallow, rocky soils to absorb heavy rainfalls, a condition exacerbated by forest clearing.

To supplement their meager resources, the SFES and the ONF secured workers, materials, and limited funds from the federal relief programs that still operated in rural Arkansas. By 1937, crews from the Works Progress Administration (WPA) and the Civilian Conservation Corps (CCC) began constructing buildings, roads, trails, weirs, dams, and other needed project infrastructure. Starting that same year, a number of formal and informal studies were installed on the Irons Fork Experimental Forest and nearby ONF lands. Eventually, projects included studies on water runoff and streamflow, erosion, logging and logging slash disposal impacts, soil and road bank stabilization, and impoundment dams and other water diversions. The jobs created by this research meant local backing was also strong. U.S.  Congressman William Fadjo Cravens, a Fort Smith (Sebastian County) native and Democrat from the Fourth District, became an early advocate of the Irons Fork Experimental Forest. The newly elected Cravens took a tour of the developing experimental forest on December 12, 1939, and less than a month later provided glowingly supportive testimony in the USDA Appropriations Subcommittee hearings for fiscal year 1941.

With the July 19, 1940, signing of an establishment report by the chief of the USFS, the Irons Fork Experimental Forest officially opened. During its peak activity in the early 1940s, considerable quantities of data were gathered, and the Irons Fork hosted several well-attended field days for local citizens, regional agencies, and politicians. Yet even in the midst of this promising start, circumstances worked against the experimental forest. Reductions to—and the eventual loss of—the CCC and WPA workforces between 1939 and 1941 deprived the effort of much of its needed labor. The drain of federal resources needed for the war effort proved an even bigger challenge. In February 1942, SFES Director E. L. Demmon sought Cravens’s help when it seemed likely that the work at Irons Fork would be halted due to insufficient funding. As World War II continued, USFS staff were reassigned to national defense–related duties or otherwise departed and were not replaced. Virtually all field measurements at Irons Fork stopped in 1943, when the SFES ended the forest influences research program. By April 1946, SFES listed the Irons Fork Experimental Forest as “inactive.”

Irons Fork would not be reopened as an experimental forest. In the mid-1950s, Clement Mesavage, then head of the SFES’s Central Ozarks Research Center in Harrison (Boone County), considered restarting research at the site, but it was poorly suited for the studies needed in the Ouachita Mountains, especially after the more accessible Alum Creek Experimental Forest was established near Hot Springs (Garland County). In 1958, the SFES and ONF reduced the Irons Fork Experimental Forest to 1,280 acres in Polk County. In 1969, the Irons Fork was formally “disestablished” as an experimental forest and returned to national forest operations. While little published watershed research came from Irons Fork, scientists and managers did learn some important regional lessons on forests and water.

“Statement of the Hon. Fadjo Cravens, a Representative in Congress From the State of Arkansas.” Hearings Before the Subcommittee of the Committee on Appropriations, House of Representatives, Seventy-Sixth Congress, Third Session on the Agricultural Department Appropriation Bill for 1941. Washington DC: Government Printing Office, 1940, 1346–1348. 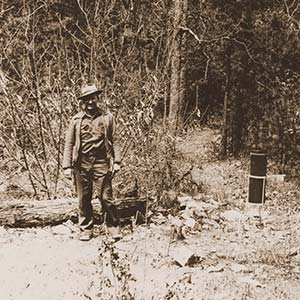 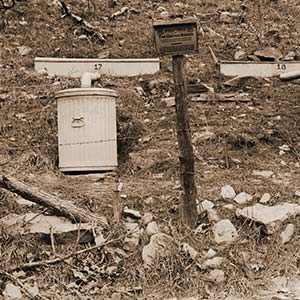