Holla Bend National Wildlife Refuge (Holla Bend NWR), located six miles south of Dardanelle (Yell County), is a strategic stopover for migratory birds. The 7,000 acres (owned plus managed) offers a place for wintering ducks and geese to rest, and for spring and summer birds to nest while traveling the Central and Mississippi flyways. Extensive wildlife also makes this protected area its year-round home.

In 1954, the United States Army Corps of Engineers’ navigation and flood control project along the Arkansas River straightened a section of the river by cutting a channel across Holla Bend Bottoms—on the water route of the Trail of Tears—to improve navigation and prevent flood damage, resulting in an island between the old and new river channels. This agricultural land—at one time occupied by as many as sixty-five families in the early 1900s but already abandoned by farmers after the 1927, 1936, and 1937 floods—was conveyed to the Department of Interior under the Transfer of Real Property Act in 1957 for use as a wildlife refuge, thereby bringing into existence Holla Bend NWR.

Natural foods and planted crops from both farming and moist soil management programs provide food and nutrients. Designated within the refuge boundaries are reforestation acreage for hardwoods as well as wetlands.

Although Holla Bend NWR is a wildlife haven, limited hunting and fishing are allowed at designated times and under specific regulations. Small game as well as deer and turkey can be hunted under a special refuge permit. Regulated fishing practices are also in place.

Some 40,000 people annually visit the refuge, where the public is provided with optimal opportunities for wildlife observation and photography, with fourteen miles of roads open to public vehicle traffic, ten miles of roads and trails to foot traffic, one observation tower, and two boat-launching facilities. While sites welcome both people and wildlife, as with every refuge, wildlife resources are mandated by law as the first priority, with recreational use for the public allowed only when it does not interfere with wildlife. 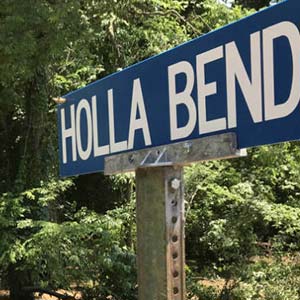