The steamboat General Bem struck a snag below Walnut Bend on the Mississippi River in 1854, losing fifteen passengers.

The General Bem was a 116-ton sidewheel steamboat built at Paducah, Kentucky, in 1849. The vessel was going downstream from Cincinnati, Ohio, heading for the Arkansas River under a full head of steam on January 3, 1854. As it approached the “Grand Cut-off” near Walnut Bend, east of Marianna (Lee County), at around 9:00 p.m., it struck a snag.

According to reports, the General Bem “poised herself for a moment” on the snag and then “commenced swinging, in which operation she was torn into a thousand atoms.” The crew and several passengers rushed to the upper deck after the collision, with several people falling overboard, clutching wreckage from the steamboat to stay afloat. The cabin separated from the hull as the Bem quickly sank to its hurricane deck, leaving several passengers trapped in the hull who were “hurried…into the presence of their God, without a moment of preparation.”

Another steamboat, the Saranac, came across the scene of the disaster almost immediately. The Saranac cut its engines, and “and then were audible the earnest cries and supplications of the poor sufferers for help.” The Saranac’s first mate set out on the ship’s yawl and began pulling victims from the water.

When the mate reached the hull of the General Bem, he found that there was a passenger below the deck “yet struggling for life, his cries barely audible.” The mate grabbed an axe and chopped through the flooring and “drew forth the suffering victim, who almost instantaneous with his delivery, became insensible, and so remained for several hours.” The Saranac’s crew saved about twenty-five people who “would have been consigned to a watery grave.” Fifteen passengers perished in the hull of the General Bem, however. Around midnight, the survivors were transferred from the Saranac to the steamboat Ocean.

The diving bell boat Stingaree salvaged the considerable cargo from the General Bem in August 1854, shortly after doing the same from the wreckage of the Clermont No. 2.

The General Bem catastrophe provides another illustration of the dangers of steamboat travel in Arkansas waters in the nineteenth century, when encounters with snags also caused mass casualties on the Belle Zane in 1845, the John Adams and Clermont No. 2 in 1851, the Defender in 1860, the Cambridge in 1862, the B. M. Runyan in 1864, the Mercury in 1867, the G. A. Thompson in 1869, and the Nick Wall in 1870. 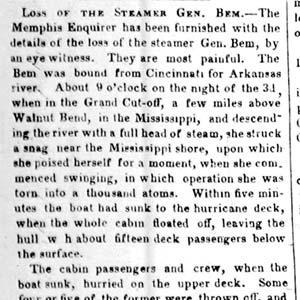 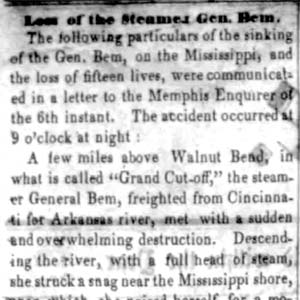