The Defender was a Mississippi River steamboat that sank after hitting a snag near Laconia (Desha County) on April 14, 1860, killing at least three people.

The Defender was a 294-ton sternwheel paddleboat built at Brownsville, Pennsylvania, in 1855. In 1860, it was commanded by a Captain Evans and running between New Orleans, Louisiana, and Pittsburgh, Pennsylvania.

The Defender was steaming up the Mississippi River near Laconia when, at about 3:00 p.m. on April 14, 1860, it struck what was reported as “a huge snag, nearly as large in circumference as the boat’s chimneys.” The snag hit the steamboat’s stern about a foot below the waterline on its starboard side and “tore her bow off completely, and passing upward, carried away her forward cabin bulkhead and passed through the hurricane deck.” One newspaper described the snag as “one of the ugliest customers in the Mississippi.”

“One passenger was literally impaled upon it, and instantly killed,” a newspaper reported. “Two others are missing, and it is supposed that they were either struck by the snag and killed, or in their terror jumped overboard and were drowned.” A later account said five people were killed in the Defender disaster.

The ship’s crew immediately steered the Defender toward shore, and the steamboat sank stern down, with its bow resting on the riverbank. The steamboat Ingomar arrived soon after the accident and took the Defender’s survivors aboard, transporting them to Memphis, Tennessee.

The Defender’s crew salvaged what they could of the cargo, and the passengers gathered their damaged luggage. The $12,000 vessel, which was partially insured, was said to be a total loss.

The Defender catastrophe provides another illustration of the dangers of steamboat travel in nineteenth-century Arkansas waters, where encounters with snags also caused mass casualties on the Belle Zane in 1845, the John Adams and Clermont No. 2 in 1851, the Cambridge in 1862, the B. M. Runyan in 1864, the Mercury in 1867, the G. A. Thompson in 1869, and the Nick Wall in 1870. 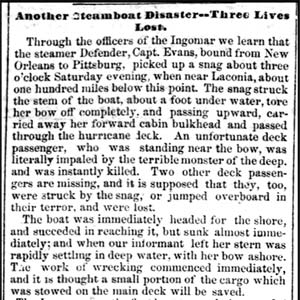