The John Adams was a steamboat that hit a snag in the Mississippi River and sank, killing 130 passengers and crew members on January 27, 1851.

The John Adams was a 298-ton sidewheel paddleboat built in Cincinnati, Ohio, in 1848 by Captain Henry A. Jones and his partners to run the route between Cincinnati and New Orleans, Louisiana. The vessel was headed upriver at full steam with a full load of cargo and passengers—many of them returning from the California Gold Rush, along with immigrants from Germany, Ireland, and Italy—when the vessel struck a snag at around 3:00 a.m. on January 27, 1851, near Island No. 82, located between Columbia (Chicot County) and Gaines’ Landing (Chicot County).

The pilot, a Mr. Leonard, tried to run the John Adams onto a sandbar, but the damage was so extensive that the vessel’s hull sank in seconds in sixty feet of water. A newspaper reported that “when the boat struck, the alarm was immediately given, and numbers of passengers—men, women, and children—made their way to the deck, and thus were saved; but as the warning was short, numbers doubtless perished in their [beds] or struggled for life only to meet death at last between the decks.”

When the steamboat’s bow struck the river bottom, its deck separated from the hull and began drifting downstream, eventually breaking in two, with one part stopping below Columbia and the other floating nine miles farther downstream. Jones and his officers helped women and children escape from the ladies’ cabin, but most of the passengers in the forward cabin were lost. Of the 100 deck passengers, only three were saved, and seven of nine of the John Adams’s firemen were lost, as were all of the deck hands.

The steamboat Peytona rescued many of the passengers atop the floating remnants of the deck, as well as others who had made it to shore; one man reportedly swam five miles before making it to dry land. The final death toll from the John Adams disaster was 130 passengers and crew members.

The John Adams catastrophe provides another illustration of the dangers of steamboat travel in nineteenth-century Arkansas waters, where encounters with snags also caused mass casualties on the Belle Zane in 1845, the Cambridge in 1862, the Mercury in 1867, the G. A. Thompson in 1869, and the Nick Wall in 1870. 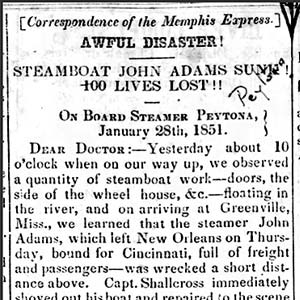 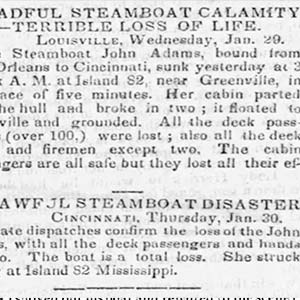