The Garland County Courthouse is located at Ouachita Avenue and Hawthorne Street in Hot Springs (Garland County). The four-story brick building is recognized by the Arkansas Historic Preservation Program to be both architecturally and historically significant, with one source calling it perhaps the finest example of Renaissance Revival–style architecture in the state. It was listed on the National Register of Historic Places in 1979.

Hot Springs was chosen as the seat of government for Garland County. The first session of the Garland County Quorum Court met in 1873 in a storehouse downtown on Central Avenue. Meetings were then held at various locations until the court convened regularly at Hot Springs City Hall from 1879 through 1882. That year, the court purchased the Allard residence downtown, which was used until it was destroyed by fire in 1888. It was rebuilt but burned again in 1905.

Since they had seen official records consumed in the fires, Garland County residents determined to build a more suitable courthouse. The site selected was at Ouachita Avenue and Hawthorne Street. The building was constructed for $155,000 in the Renaissance Revival style, sometimes called Neoclassical, which is based on the architecture of sixteenth-century Italy and France.

The Garland County Courthouse was constructed as a rectangular building with central bays projecting from its northern and southern sides. It featured a domed lantern on the roof and a pair of Ionic columns. The cornerstone was laid on August 15, 1905. Fireproof vaults were installed to safeguard county records. However, that building was left a shell after being severely damaged in the Hot Springs fire of 1913, with many county records destroyed in the allegedly fireproof vaults.

With the remaining masonry-concrete frame of the courthouse discovered to be sound, Garland County rebuilt the courthouse that is used today. Tile floors, marble wainscoting, and rich woodwork cover the scorched interior. Two small additions were completed in 1930 and 1977, though the current courthouse is said to retain the integrity of its 1905 and 1913 incarnations because few building alterations have been performed since the fires. In 1974, the courthouse added a handicapped-accessible entrance; a 1978 renovation upgraded interior electrical and plumbing systems; and the domed cupola on the roof was replaced in 1979.

A 1905 time capsule in the cornerstone was opened in 2005, and the coins found within it are displayed in the county treasurer’s office. 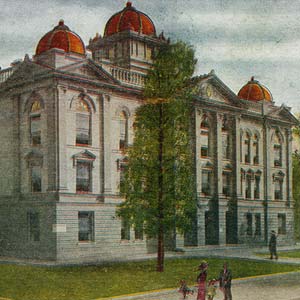 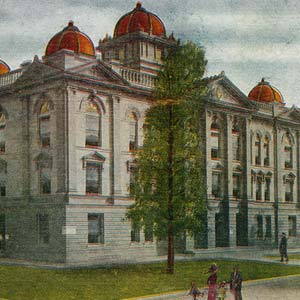