Fred Thomas Jones Sr. was a physician and pioneer in providing insurance and medical care to African Americans in Arkansas and Louisiana.

Fred T. Jones was born on September 8, 1877, in Homer, Louisiana, the oldest of eleven children born to Fred R. Jones, a farmer, and Harriett E. Jones, a housewife. In 1904, Jones married Hattie McGraw. The couple had a daughter but divorced soon after. Three years later, in 1907, he married Katie Chandler. They had seven children—five daughters and two sons.

After attending Claiborne Parish School at Bishop College in Marshall, Texas, and the Tuskegee Institute in Alabama, Jones graduated from Arkansas Branch Normal College (now the University of Arkansas at Pine Bluff) between 1900 and 1904, although the exact year is unknown. Jones received his medical degree from Meharry Medical College in 1905.

Jones was not allowed to practice medicine in his hometown of Homer, so he moved to Shreveport, Louisiana, where he founded the Mercy Sanitarium in 1915. At the urging of Dr. R. A. Williams of Provident Hospital in Chicago, Illinois, he moved his family to Little Rock (Pulaski County) and established the Booker T. Washington Memorial Hospital there in early 1918. In February 1918, the hospital was renamed the J. E. Bush Memorial Hospital in honor of John Edward Bush, the African-American fraternal and political leader who died in Little Rock in 1916.

In 1919, Jones established the Great Southern Fraternal Hospital in Little Rock. Located in the predominately black area of Little Rock, near the intersection of Ninth and State streets, the hospital provided medical care for members of two black fraternal organizations: the United Friends of America and the Independent Order of Immaculates. White doctors operated at the hospital along with Jones and other black physicians. The United Friends of America was established in Little Rock by the Reverend Caleb D. Pettaway and Jones in 1918. The Great Southern Fraternal Hospital operated until 1929.

Jones popularized the concept of the “hospital plan,” an insurance plan whereby subscribers would pay monthly dues to offset future hospital visits. In 1920, he copyrighted “The Fraternal, Benevolent, Charity and Hospital Plan,” which described his vision of affordable healthcare for African Americans. By all accounts, the hospital plan was successful.

Jones moved his family to Chicago in May 1927 after the lynching of John Carter, a black man accused of assaulting a young white girl. Fearing for his family’s safety, Jones sent his wife and six of his children out of state until tensions eased. According to Jones’s daughter, armed white men followed the family’s car on its way out of Little Rock. Jones remained in the city to continue to provide medical care to the area’s black citizens, even though he was threatened with violence. Jones’s wife and three youngest children returned to Arkansas in 1937.

After the closure of the Great Southern Fraternal Hospital in Little Rock, Jones established the Great Southern Hospital in Pine Bluff (Jefferson County) in 1932. After a year and some 200 successful operations there, the resentment of some white citizens forced Jones to return to Little Rock. Afterward, he and Dr. Lonnie Routen organized the Southern Hospital Association in North Little Rock (Pulaski County). Jones served as chief surgeon at the hospital until his death in 1938. A separate Jones Brothers Laboratory, operated by Jones and his son Booker, manufactured and distributed prescription medicines in the area.

Jones served as president of the Arkansas Medical, Dental and Pharmaceutical Association in 1934 and as an officer of the National Medical Association. He was also active in civic, business, and religious affairs of Little Rock, including the Black Chamber of Commerce, which Jones helped establish, although the year of establishment is unknown.

Jones died on September 10, 1938, in Little Rock and is buried there in Haven of Rest Cemetery.

Health and Medicine
Segregation and Desegregation 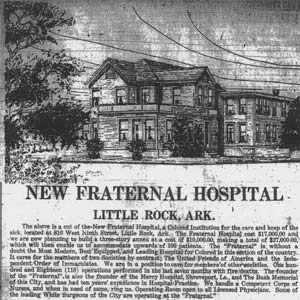 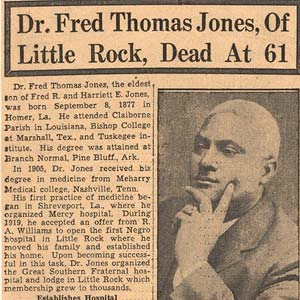 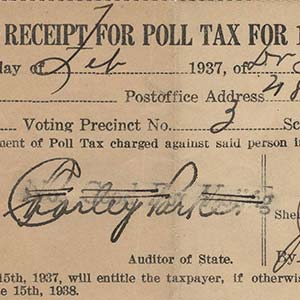 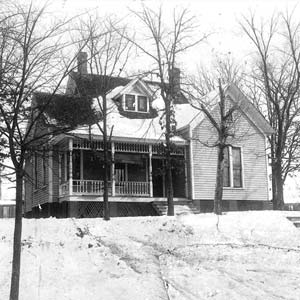 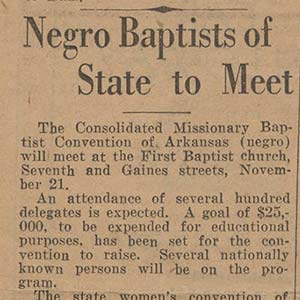 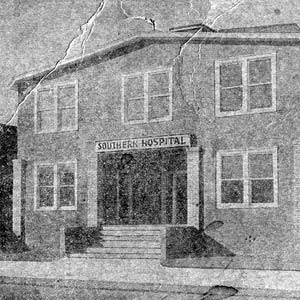 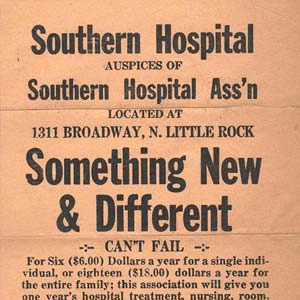