The Faulkner County Courthouse, located at 801 Locust Street in Conway (Faulkner County), consists of brick and concrete masonry construction standing four stories tall. This building blends Colonial Revival and Art Deco styles, with the Colonial Revival details including the arched fanlight windows, accentuated front door, and classic pilasters. The Art Deco style has been artfully merged into it, evidenced by the smoothly rising vertical projection above the straight roofline, as well as the decorative accents on the building, such as the corner quoins and the symmetrical façade.

The Faulkner County Courthouse was not the first courthouse built in Conway. In September 1873, the Board of Commissioners of Faulkner County selected Conway as the county seat. Asa Robinson, the chief engineer of construction for the Little Rock and Fort Smith Railroad in the 1870s, donated the land for a courthouse. He had received this land instead of monetary compensation from the railroad during a time of financial hardship. The first courthouse building existed until 1893, when it was replaced by a Romanesque Revival–style building. The second courthouse remained for over forty years until the third was constructed. Faulkner County built all three courthouses on the same plot of land in Conway.

The architecture firm Wittenberg and Deloney (now Wittenberg, Deloney and Davidson Architects), based in Little Rock (Pulaski County), designed this courthouse in 1936. Art Deco accents were popular in the 1930s for municipal buildings, which explains the style combination chosen for this project.

The second-floor courtroom in the Faulkner County Courthouse has twenty-foot-high ceilings spanning the second and third floors. The massive arched fanlight windows allow light into this area of the building. On the fourth floor of the building, the windows are covered with metal bars, as the entire floor is used as the jail. While these accents appear aesthetic from the outside, they were designed with both practical and artistic application.

The courthouse sits on approximately two and a half acres. Along with the courthouse building, the grounds contain other structures, including a log house, the 1896 county jail, and a monument. In 1937–38, the Works Progress Administration modified the jail building for use as a library. Later, the building included several additions, increasing its size to 8,000 square feet. In 1995, the library moved to a larger facility, and the historic jail building began housing the Faulkner County Museum. This building was listed on the National Register of Historic Places on July 20, 1978. The dogtrot log cabin located on the property is also part of the Faulkner County Museum. The Faulkner County Historical Society donated the building in 1969. It was constructed in the 1850s on land eight miles west of Conway and was relocated to the Faulkner County Courthouse grounds. A time capsule, located within a well structure near the log cabin, is set to be opened in 2073. The Conway Confederate Monument, dedicated in October 1925, also stands on the grounds. This stone monument, erected by the United Daughters of the Confederacy, Robert E. Lee Chapter, contains carvings of crossed flags and is over sixteen feet tall. 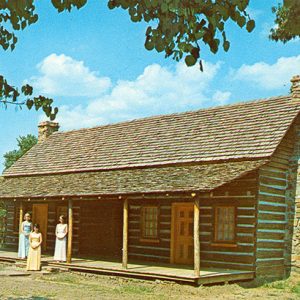