The Emmet United Methodist Church is located at 209 Walnut Street in Emmet (Nevada and Hempstead counties). The church was constructed around 1917 and was listed on the National Register of Historic Places on September 23, 2009.

Emmet was platted in 1873 when construction on the Cairo and Fulton Railroad reached the area. Most of the land where the town is located became the property of the president and vice president of the railroad in 1874. Several lots in the town were set aside for the use of schools and churches. A Methodist church was established in the area around 1855 and was used for several decades. The church received a lot in the new town for construction of a church. Little progress was made on the project after the platting of the town, however. Emmet was incorporated in 1883, and two years later, Emmet became the head of the local Methodist circuit.

A wood-frame building was constructed for the congregation in 1891, replacing the original church. The church continued to grow, and a new building was needed for services and Sunday school lessons. It is unclear exactly when the church was constructed. The church was built on Lot Number Six, but additional property was necessary for the construction. The deed for this property is dated January 27, 1917. The date of construction and the first service is given in different sources as 1917 and 1918. It is likely that the construction began in 1917 and the first service was held the following year.

The architect and builder of the church are unknown, although the brown brick church was built to the Akron Sunday School Plan. This design allows a central rotunda to be surrounded by classrooms. Instructions can be delivered by a speaker in the rotunda, and sliding doors can then close off the rooms to allow for individual lessons. Curved pews surround the central rotunda, and a narrow aisle provides access to the pulpit.

The church faces south. A wooden ramp was added to the west side of the building. A curved portico with four columns with both Ionic and Doric details fronts the building. The church is square in design, with the front entry located in a corner. A set of double-paneled half-light doors that originally contained amber glass offer entry into the building. The doors are topped with a transom with amber glass. Gaslights added in the 1950s are located on both sides of the portico, and a set of one-over-one windows flanks the doors. The porch is accessed by a set of concrete steps.

The walls that extend on either side of the porch each include three two-over-two horizontal windows. These windows contain amber panes of glass.

A fellowship hall was added to the rear of the church in 1948. The white, wood-frame building was constructed at the Southwest Proving Ground and was used as a hospital during World War II. It is connected to the church by a covered walkway.

The church became inactive sometime after its National Register nomination in 2009. The Emmett Methodist Church was listed as one of Arkansas’s most endangered historic places by Preserve Arkansas in 2019. 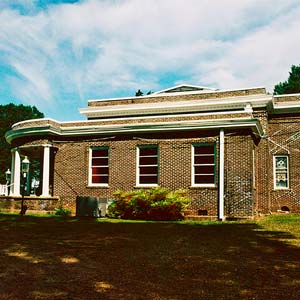