Edomae Boone Watson was a prominent African-American civic and education leader in Jonesboro (Craighead County). In addition to being an educator in Jonesboro’s segregated and then integrated school system, she also played a pivotal role in developing the Head Start program in Jonesboro. She served in state and national organizations to secure funding to provide early-childhood education opportunities for low-income children in Jonesboro.

Edomae Boone was born on April 2, 1907, near Augusta (Woodruff County). She obtained a high school diploma from Shorter College, then in Little Rock (Pulaski County), one of the few places in Arkansas that provided diplomas to black students. She received a bachelor’s degree in elementary education from Arkansas Agricultural, Mechanical, and Normal School in Pine Bluff (Jefferson County), now the University of Arkansas at Pine Bluff.

She married Charles E. Watson on June 27, 1931, in Jonesboro. She was an active member of St. Paul African Methodist Episcopal Church in Jonesboro as both a singer in the choir and superintendent of the Sunday school.

In 1927, she was employed as a faculty member at Jonesboro’s segregated Craighead and Jonesboro Training School, known also as Industrial High School and later Booker T. Washington High School. The Parent Teacher Association named her Teacher of the Year in 1931.

She worked for Booker T. Washington High School until the Jonesboro School District integrated in 1966. She then worked at the newly integrated West Elementary School.

After thirty-seven years of teaching, she became assistant director of the new Head Start program. The following year, she became director of the program and supervised a mostly white group of employees. Governor Winthrop Rockefeller appointed her to the state Early Childhood Commission. She also served on the executive board of the Day Care and Child Development Council of America. In this role, she advocated in Washington DC for continued federal funding for early childhood education.

In 1984, the Arkansas Department of Health and Human Services honored her for her “outstanding leadership, direction, and contribution in the provision of human service.” That same year, the community center located where the Industrial High School once stood was renamed E. Boone Watson Community Center—a further acknowledgement of her civic contributions to Jonesboro.

When Watson died on January 21, 1986, the Jonesboro Sun placed her death announcement on the front page and highlighted her important role as a civic leader, educator, and Head Start director. She is buried in the Jonesboro City Cemetery.

Education, Elementary and Secondary
Modern Era, 1968 through the Present 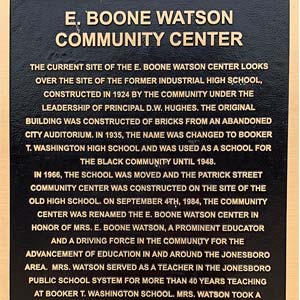