Charles M. Norwood ran for governor in Arkansas in 1888 as the candidate of the Union Labor Party (ULP). Although he lost, he came closer to victory than any other challenger to the gubernatorial candidate of the Democratic Party in Arkansas between 1874 and 1964. Furthermore, recent historical studies have suggested that Norwood would have won his gubernatorial bid had the election not been marred by fraud and violence.

Charles M. Norwood was born on February 29, 1840, in Giles County, Tennessee, to Josiah M. Norwood and Sarah A. Norwood, who moved their family to Arkansas around 1847. Norwood’s father became the treasurer of Lafayette County, and Norwood attended private schools in Columbia County.

In 1861, Norwood enlisted in the Confederate army as a private. He fought in some notable battles, including Shiloh, Stone River, and Chickamauga, where his right leg was wounded severely enough that it was amputated in 1863. He nevertheless continued to serve in the army for the remainder of the war. He spent 1866 and 1867 enrolled at a medical college in New Orleans, Louisiana. He then returned to Lafayette County, where he began to practice as a doctor. On December 19, 1869, he married Harriet L. Holleman, with whom he would have six children.

While continuing his medical practice, Norwood purchased a farm in Lafayette County, and he became involved in politics as well the farmers’ protest movement that led many Arkansas farmers to support third parties during the 1880s and 1890s. After serving as Lafayette County’s assessor, Norwood became a state senator in 1882. He later joined the Farmers’ Alliance and, in April 1888, accepted the gubernatorial nomination of the Union Labor Party, a newly formed conglomeration of farmer and labor groups. The Arkansas Gazette subsequently scoffed that Norwood was “probably the most ignorant man who ever aspired to high position in Arkansas,” but the less-biased St. Louis Post-Dispatch reported that Norwood was “regarded as a strong man.” In July 1888, the Arkansas Republican Party endorsed Norwood, making him the lone challenger to Democratic nominee James P. Eagle. Norwood campaigned across the state, urging farmers and laborers to “strike decisive blows for the emancipation of enslaved labor” at the ballot box.

Officially, the gubernatorial election in September 1888 resulted in victory for Eagle, with 99,229 votes to Norwood’s 84,223. Union Laborites and Republicans stood together again in charging Democrats with having engaged in violence and fraud, including the theft of ballot boxes in districts of strong ULP support, in order to secure their victory. Incumbent governor Simon P. Hughes had sent guns and ammunition to Democratic Party Clubs in some counties, and Democrats openly beat and shot Republicans and Union Labor men on election day, reportedly killing seven men in Union County.

In January 1889, Union Labor state legislator J. W. Dollison of Clay County introduced a petition in the Arkansas House of Representatives on behalf of Norwood requesting an investigation of the election. The state legislature agreed to appoint an investigative committee, but only on the condition that Norwood first secure a $40,000 bond to be forfeited if the committee did not find in his favor. This stipulation accomplished its intended result, as Norwood declined to press his case any further. Later investigations of the election by historians have supported Norwood’s belief that he was, in the parlance of that era, “counted out,” or robbed of the victory by undemocratic means.

While the ULP would wage another statewide campaign in 1890 and then give way to the People’s (or Populist) Party for subsequent campaigns, Norwood did not seek office again until after the latter party had faded from the scene. In 1906, he sought the nomination of the Democratic Party for a seat in the Arkansas Senate, but he failed to win the primary election. He died on November 11, 1920, and is buried at Sardis Cemetery in Stamps (Lafayette County). 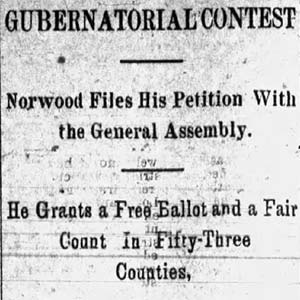