McCracken and Farris organized the Brothers of Freedom, originally (but only briefly) as a secret organization, in order to enable farmers to earn a “just reward” for their labor, partly through cooperative enterprises. The organization’s name was inspired by an old revolutionary organization called the Sons of Freedom, and republican, class-based rhetoric permeated the Brothers of Freedom’s Declaration of Purposes, which declared that “[w]hile it is an established fact that the laboring classes of mankind are the real producers of wealth, we find that they are gradually becoming oppressed by combinations of capital, and the fruits of their toil absorbed by a class who propose not only to live on the labors of others, but to speedily amass fortunes at their expense.” Practitioners of professions upon which the Brothers of Freedom apparently frowned—merchants, bankers, and lawyers—were forbidden to join the organization, as were women and African Americans. The organization urged members to practice a philosophy of “self-help” as well as diversified farming and cooperative enterprise. But these efforts failed to produce significant benefits for members of the Brothers of Freedom, which by 1885 had not only spread across northwestern Arkansas but had also chartered lodges in Alabama and Texas.

In 1885, leaders of the Brothers of Freedom began negotiations with leaders of the Agricultural Wheel (formed in Prairie County in 1882) to consolidate the two organizations. The merger occurred in October 1885, with the Brothers of Freedom relinquishing its name but choosing McCracken as the new president of the Agricultural Wheel. Under McCracken’s leadership, the Agricultural Wheel ran a state ticket and many county tickets in Arkansas in 1886 and helped form the Arkansas Union Labor Party, which in 1888 and 1890 presented the Arkansas Democratic Party with its most serious challenge since the end of Reconstruction. In the early 1890s, the Agricultural Wheel and the Union Labor Party gave way to the Farmers’ Alliance and the Populist Party. Although the independent and third-party movements led by Arkansas farmers’ groups (with assistance from the Knights of Labor) never did wrest control of state government from the Democratic Party, whose leaders proved willing and able to subvert democracy through violence and fraud, the farmers’ revolt ultimately influenced the policies of Arkansas Democratic officeholders, most notably Governor Jeff Davis in the early twentieth century. 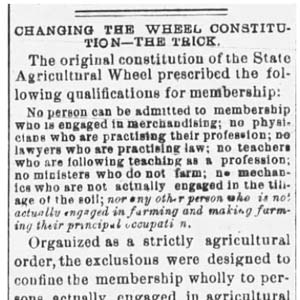