Tim West was a reclusive artist who lived and worked in the woods near Winslow (Washington County) for more than forty years. The son of writers Don West and Muriel Leitzell West, who had homesteaded in the Winslow area beginning in 1938, West completed a graduate degree in art before pursuing his very private life as an eccentric sculptor, painter, and ink artist near the land where he roamed as a young boy.

Timothy (Tim) West was born in Santa Fe, New Mexico, on July 7, 1937, before coming to Arkansas as a baby with his parents and older sister Petra. Homeschooled as a child by his mother, West eventually attended the University of Arkansas (UA) in Fayetteville (Washington County). In addition to writing and farming, West’s parents were both artists, having met at an artist colony in New Mexico; Muriel West created sculptures around their homestead, including elaborately carved headboards and posts for the family’s beds. After two years at UA, he transferred to Southern Illinois University (SIU) in Carbondale, where he completed a BA and MFA in art. West’s mother had joined the faculty of SIU. While in Carbondale, West achieved some renown as an artist, with works accepted for exhibition at prestigious museums. Demonstrating great confidence even as a teenager, West submitted an unsolicited piece to the Museum of Modern Art only to have it surprisingly accepted as part of the permanent collection.

West frequently encountered legal troubles, however, for petty theft and instances of public indecency; he also struggled with alcoholism. West left Carbondale after twelve years there (at one point banned from the SIU campus), in part to get away from legal issues. By the 1970s, West had relocated to Winslow, where he occupied his family’s land.

Living largely off the grid, with only limited electricity, West kept more than twenty cats. He filled the woods around his home, and sometimes other people’s property, with installations made of found objects. He built functional sculptures like gates out of trash and transformed ordinary items such as bicycles and rusted car parts into an imagined landscape.

West was well known for his use of bicycles as his primary mode of transportation. Both in Illinois and in Arkansas, West would often ride his bike more than thirty miles one way to travel to the city or to campus, making frequent trips from Winslow to UA.

West often gave works of art as gifts to neighbors and residents of the Winslow area. He produced hundreds of works on paper and collages, often incorporating mixed media that included graphite, pen and ink, and paint. His imaginative, and sometimes nightmarish, drawings combined pastoral imagery, including scenes from the Ozark hills where he lived, with sexual imagery, skeletons, and other references to death, using rapid energetic strokes. Some of his work depicts bondage and other sexual fetishes, as well as graphically sexualized depictions of older women. As he retreated from the professional art world and isolated himself in and around his family’s land in Arkansas, West increasingly felt rejected by art critics and the art market. He often communicated his feelings of suspicion and mistrust to his friends.

A chance encounter with photographer Diana Michelle Hausam led to her dedicating years to promoting West’s artwork around Arkansas, as well as documenting his life. While scouting in the Winslow area for photographic subjects in 2006, Hausam discovered a sculptural gate West created out of garbage and old bicycles. She sought out the artist, eventually becoming close friends with him and facilitating a renewed interest in his work. A collaborative exhibit featuring the photographs Hausam took of West, The Artist, premiered at M2 Gallery in Little Rock (Pulaski County) in 2009. Hausam continued her work by creating a documentary film about West, called Westland. After his death, West was celebrated through gallery showings in northwestern Arkansas. A short preview edition of Hausam’s feature-length documentary film screened on Arkansas public television, AETN (now Arkansas PBS). Other short-format and web-published films have appeared since West’s death. Galleries in Fayetteville and the surrounding area have hosted several exhibitions of his work, often in conjunction with Hausam’s photographs of West. His work has been shown in New York City and other places around the United States.

In addition to M2 Gallery and private collections, West’s art is included in the permanent collections of the Museum of Modern Art, the Metropolitan Museum of Art, and the University of Arkansas Libraries.

After years of chronic health issues and untreated illnesses, West died on April 2, 2012.

Arts, Culture, and Entertainment
Modern Era, 1968 through the Present 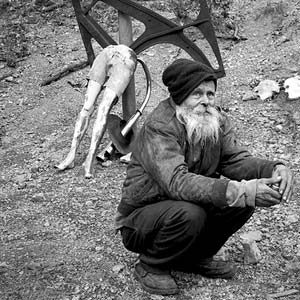