Maumelle is a city five miles west of Little Rock (Pulaski County) on Interstate 40. A fast-growing, affluent suburb of Little Rock, it has the highest median household income in the state of Arkansas, according to the U.S. Census Bureau. It is one of the planned communities that arose in central Arkansas during the 1970s.

The area that is now Maumelle was visited by European explorers prior to the Louisiana Purchase and American settlement. Maumelle derives its name from the French word mamelle, or “breast,” probably due to the conical shape of nearby Maumelle Mountain (now Pinnacle Mountain).

Identifying the early settlers of Maumelle is difficult, as they left few written records. Although a few had obtained land grants from the Spanish and French colonial governments prior to the Louisiana Purchase, most early American settlers of Maumelle were squatters. Some of the earliest recorded American settlers of Maumelle arrived from Alabama in March 1812. They were led by the brothers James Pyeatt, a farmer, and Jacob Pyeatt, who operated a ferry on the Arkansas River. The first Protestant services held in Arkansas were conducted in 1812 in the home of James Pyeatt by the Reverend John Carnahan of the Cumberland Presbyterian Church. The original settlement, called Pyeattstown, grew to 150 people by 1819.

The naturalist Thomas Nuttall noted the beauty of the area in his journals and sketched Maumelle (Pinnacle) Mountain as he traveled up the Arkansas River from Little Rock to Cadron (Faulkner County) from March 20 to March 27, 1819.

Pyeatte township was formed in 1823. James Pyeatt died in 1833 and was buried near his land in a small cemetery that is now near the Maumelle Country Club’s golf course. The township of Maumelle was formed in 1842. It was composed of two sections: Little Maumelle and Big Maumelle.

Throughout the 1800s and early 1900s, Maumelle remained a small farming town. In 1941, the U.S. government purchased land from farmers in order to build the Maumelle Ordnance Works, a munitions manufacturing and storage facility. After World War II, the army no longer had a use for the facility and sold it to the Perry Equipment Company in 1959. In 1961, the property was sold to the City of North Little Rock (Pulaski County) which intended to develop the area as an industrial park. The industrial park never materialized. However, the Maumelle Ordnance Works Bunker No. 4 remains and is listed on the National Register of Historic Places.

In 1956, the Big Maumelle River was dammed to create the 8,900-acre Lake Maumelle. It is one of the main sources of drinking water for the Little Rock metropolitan area.

In the early 1970s, the U.S. government encouraged the establishment of new, planned communities by private developers via the Urban Growth and New Community Development Act (later renamed the National Policy and New Community Development Act of 1970). In 1967, Jesse P. Odom, an insurance executive and Arkansas businessman, purchased 5,000 acres in the area and formed Maumelle Land Development, Inc. With $45 million in assistance from the U.S. Department of Housing and Urban Development, he planned a modern town with a 1,021-acre industrial park, many amenities, and a progressive philosophy that included housing for low-income families and cheaper healthcare. This community became informally known as “Maumelle New Town.” It began as five distinct “villages” and was anticipated to grow to 60,000 residents. In 1971, Odom was also able to secure an additional $7.5 million from Alabama-based Liberty National Life Insurance Company. At the time, it was one of the largest private loans ever made by a private lender to an Arkansas project. By 1974, the first families began to arrive in the area.

In 1984, Ernest D. Faucett of the Arkansas Electric Co-operative Corporation—along with the Arkansas Industrial Development Commission (now the Arkansas Economic Development Commission), the Arkansas Science and Technology Authority, and Governor Bill Clinton—was able to persuade Hi-Tech Industries of Tampa, Florida, to construct a $10 million biomedical research facility in the Maumelle Industrial Park. The facility was to specialize in genetic engineering for purified proteins. It initially employed 100 scientists and 200 support personnel. Eight other firms were expected to join Hi-Tech at the 40,000-square-foot facility and form the Bioplex International Corporation, which was planned to grow to twenty-eight firms employing 3,200 in a facility predicted to be worth $300 million. The construction was to be paid for by revenue bonds raised by the State of Arkansas, Worthen Bank and Trust Company, and other local financial entities. However, this facility never materialized.

Although many residents of Maumelle commute to the Little Rock metropolitan area to work, the city also has businesses of its own. Currently, the largest employers in Maumelle include Molex Incorporated and Kimberly-Clark Corporation. Other local employers include Ace Hardware, Cintas Corporation, and BEI Precision Systems & Space Company, Inc.

The Maumelle Country Club features an eighteen-hole championship golf course, swimming pools, tennis courts, and a club house. The Jesse P. Odom Community Center provides fitness equipment and basketball courts. The Maumelle Diamond Center and Rolling Oaks Soccer Complex feature a variety of baseball and soccer fields, respectively, and the Dowell Naylor Aquatic Center has swimming pools. Maumelle also has many small parks, with more than thirteen miles of walking trails. Since 2006, the Maumelle Family Fest, which features a carnival with rides and games, has been held every year at nearby Lake Willastein. 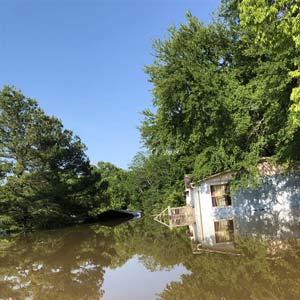