David Dickson Terry was a U.S. congressman for nine years. His most important contributions in that body were directed toward his home city of Little Rock (Pulaski County), where his family had a history of active involvement in political and community affairs. His work in the U.S. House of Representatives helped establish a series of Arkansas River dams. He is also remembered for his long association with local institutions such as the Little Rock Boys Club.

In 1910, Terry wed Adolphine Fletcher, who later became a well-known activist for women’s rights and public education. They had four children: David, Sarah, William, and Mary. Mary was wheelchair-bound from osteogenesis imperfect, a debilitating bone disease. The Terrys spent much time in New England, where Mary was treated. In 1928, the Terrys took in a fifth child, a foundling named Joseph.

After the marriage, the Terry family lived in the Albert Pike Mansion, a structure acquired by Adolphine’s father. The Terrys renovated it in the Colonial Revival style. It is now known as the Pike-Fletcher-Terry House.

In 1918, Terry enlisted in the military for service in World War I. He remained on military bases in the Midwest for the duration of the conflict.

Terry served on the Little Rock School Board from 1929 to 1933. In 1928, he became president of the Little Rock Boys Club. He served also as a board member at the organization’s national level. After the local club’s property was destroyed by fire in 1930, Terry chaired a committee that raised $150,000 for its reconstruction despite the economic depression that was then gripping the nation.

In 1932, in his first run for political office, Terry was elected to the Arkansas House of Representatives as a Democrat. The next year, when U.S. Congressman Heartsill Ragon resigned, Terry competed for the seat. By new state Democratic Party rules—rules that one of Terry’s opponents, Brooks Hays, was instrumental in implementing—the contest was a popular primary rather than a closed decision by party officials, as was common at the time.

The race was one of the more controversial in state history. After narrowly beating Sam Rorex for second place in a first round of voting, Terry won a run-off with Hays by a total of 625 votes. Hays challenged the results on the grounds that more people in Yell County had cast ballots than had paid a poll tax, at that time a prerequisite for voting. Hays’s appeals failed, and Terry retained the seat for the next nine years. In his 1981 memoir, Politics is My Parish, Hays did not impugn Terry personally in the dispute. Rather, he professed a belief that his enemies in the Rorex camp had defrauded him and that Terry was merely the beneficiary.

Terry achieved congressional longevity despite occasionally taking positions against popular sentiment in his home state. For example, he opposed a bill that would have given bonuses to veterans, citing concerns for fiscal prudence. Yet Terry was a champion for Arkansas in the House, even while remaining a fierce and unequivocal advocate for Franklin Roosevelt’s New Deal agenda. Terry’s first bill was a $10 million appropriation to provide relief for indebted Arkansas schools. His congressional work was instrumental in the construction of the Pine Bluff Arsenal.

In 1942, Terry declined renomination to the House in order to run for the Senate. His loss to John L. McClellan marked the end of his career in elected office. Though he considered a second run for the Senate in 1944, he decided against it because of the strength of the field, which included J. William Fulbright and the incumbent Hattie Caraway. He ran for governor instead. After placing third in a field of three during the Democratic primary, he came out in support of primary rival Ben Laney, who went on to win the governorship.

Terry’s public career continued when Laney appointed him director of Flood Control, Water and Soil Conservation in the Arkansas Resources and Development Commission. The assignment allowed him to continue the work he began in Congress toward the development of the Arkansas River. In 1936, he had initiated a Tennessee Valley Authority–style project on the Arkansas River by passing a bill to survey the river for the purposes of flood control and navigation. Though the dam project was never completed as such, Terry’s survey bill was integral in establishing the dams that were later part of the McClellan-Kerr Arkansas River Navigation System.

Terry died of Parkinson’s disease on October 6, 1963. He is buried in Little Rock’s Mount Holly Cemetery. Lock and Dam Number 6 of what is now known as the McClellan-Kerr Arkansas River Navigation System was named for him before its dedication in October 1968. 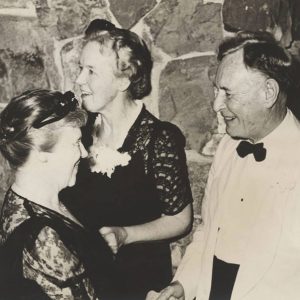