aka: Dragonflies
aka: Damselflies

Odonates belong to the Phylum Arthropoda, Subclass Pterygota (winged insects), Class Insecta, and Order Odonata. The famous entomologist Johan Christian Fabricius (1745‒1808), who was the first to provide the name Odonata, apparently used that name because they have “teeth” on their mandibles. Odonates are considered a wide-ranging, primitive order of carnivorous aquatic insects. About 102 species have been documented in Arkansas. One of the two extant suborders of the Odonata (the order to which dragonflies and damselflies belong) is the Epiprocta. This new classification was proposed relatively recently to accommodate the inclusion of the suborder Anisozygoptera. The latter taxon has been shown not to be a natural suborder but somewhat of a paraphyletic collection of lineages, so it has been …

In August 1972, Joe B. Friday discovered the remains of the right hind foot of a dinosaur in a shallow pit on his land in Lockesburg (Sevier County). He found the bones in rocks belonging to the Lower Cretaceous Trinity Group, which consists of deposits of clay, sand, gravel, limestone, and the evaporite minerals gypsum and celestite. Friday donated the bones to the University of Arkansas (UA) in Fayetteville (Washington County), where they are kept in the University Museum Collections at the Arkansas Archeological Survey. UA professor James Harrison Quinn gave the bones the informal name “Arkansaurus fridayi” in 1973. He cleaned and assembled the bones and compared them to the feet of two similar-appearing dinosaurs previously described in the … 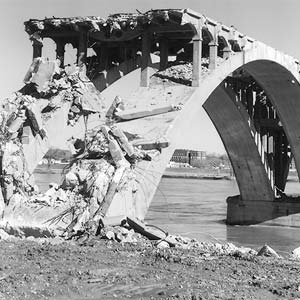 Opalinids are a small group of peculiar cosmopolitan organisms that belong to the kingdom Protista. Recent classification places the opalinids as heterotrophic stramenopiles (heterokonts) within the phylum Placidozoa, class Opalinea, and order Slopalinida. There are over 200 species, and, although opalinids are typically endocommensals (that is, living within the host without affecting it) in the large intestine and cloaca of anurans (frogs and toads), they have also been reported from fish, salamanders, reptiles, and some invertebrates (mollusks and insects). They are of no medical or economic importance, but they are interesting because their reproductive cycles are apparently controlled by the host’s hormones. In addition, opalinids are routinely encountered in dissections of frogs in college biology laboratories, and most students are …

Arkansas opossums (commonly referred to as “possums”) are of the Virginia opossum species Didelphis virginiana and can be found in both rural and urban habitats. The Arkansas Game and Fish Commission tracks opossum populations and oversees an opossum hunting season during the winter months. As the only marsupials found in North America, opossums have existed for 70–80 million years. They are highly adaptable omnivores who eat a variety of foods including insects, rodents, berries, grasses, leaves, and carrion. The females can have twenty to twenty-five babies in one litter and carry their young in their pouches for up to three months. Opossums have opposable thumbs on their rear feet and can also grasp with their tails. Contrary to popular belief, …

Ostracods belong to the Class Ostracoda within the Subphylum Crustacea and Phylum Arthropoda. Commonly called “seed or mussel shrimps,” the class encompasses over 33,000 described species and subspecies, and many more remain unknown to science and await formal description. There are two subclasses with living representatives: the Myodocopa and Podocopa. The former is exclusive to marine environments but occupies the benthos as well as the plankton, whereas podocopans occur in marine, brackish, and freshwater environments and occupy almost exclusively the benthos (but also the benthopelagic zone). The main orders are the Archaeocopida, Leperditicopida, Palaeocopida, Podocopida, and Myodocopida. As of 2019, there is no comprehensive list of extant ostracods in Arkansas. Ostracods are important fossil organisms, as they are the most …

The Ouachita Mountains Biological Station (OMBS) began serving the needs of colleges and universities as a research and education center in 1962. The OMBS was the vision of husband-and-wife team Dr. Richard K. (Dick) Speairs Jr. (1920‒2004) and Dr. Betty McKnight Speairs (1925‒2018), formerly of Louisiana State University and Centenary College (both in Shreveport, Louisiana), respectively. Together they founded the Speairs Charitable Foundation for the perpetual support of the OMBS. The station hosts collegiate groups, graduate students, faculty, and researchers for any aspect of field research and biological education. It is available at any time during the year by reservation only. The OMBS is located in the central part of the Ouachita Mountains of Arkansas, between the towns of Mena … 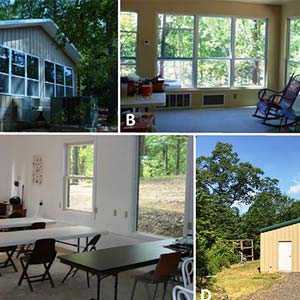 The Ozark cavefish (Amblyopsis rosae) is found in the Springfield Plateau of the Ozark Mountains. Its geographic distribution covers approximately 8,200 square miles (21,000 square kilometers), comprising an area drained by the White River on the south and the east, the Neosho River (Arkansas River basin) on the west, and the Osage River (Missouri River basin) to the north. This species has been reported in at least fifty-two caves over three states: Missouri, Arkansas (originally in ten but now in seven sites in Benton County), and northeast Oklahoma. It has been proposed that there are two subspecies of this fish: Amblyopsis rosae whitae for the White River drainage region and Amblyopsis rosae arkansasus for the middle Arkansas River drainage region. …

The salamander called the Ozark hellbender (Cryptobranchus alleganiensis bishopi) is one of two subspecies of hellbender (Cryptobranchus alleganiensis). Historically, the eastern hellbender (C.a. alleganiensis) is found throughout much of the upland areas of the United States east of the Mississippi River; it also inhabits northern portions of the Ozark Mountains of Missouri. The Ozark hellbender occurs in several southern-flowing streams of the Ozark Mountains of Missouri and has a very restricted range in Arkansas, occurring only in the upper reaches of the Spring River, in portions of the Eleven Point River in Randolph County, and in the White River at Batesville (Independence County) and near the town of Norfork (Baxter County). The hellbender, North America’s largest salamander, sometimes grows to …

The Ozark pocket gopher is a small mammal that belongs to the family Geomyidae (pocket gophers) and the order Rodentia (rodents). It is endemic to Arkansas, occurring in Izard County. The common name “pocket gopher” comes from the fur-lined cheek pouches that these animals use to carry food. Two species of pocket gophers live in Arkansas. Geomys bursarius can be found from southern Manitoba southward through the central plains of the United States toward Arkansas and Texas, with the subspecies G. b. ozarkensis found in the southwestern one-third of Izard County in Arkansas. Although a few individuals have been captured on the southern side of the White River in adjacent Stone County, no current population resides in any other county …