The X-Ray was one of Arkansas’s first “underground” newspapers. Circulated in 1912 at the University of Arkansas (UA) in Fayetteville (Washington County), the X-Ray was known for criticizing not just the university and its policies but also its faculty. The X-Ray sparked a wave of social change in Fayetteville that affected how the university was run. Ultimately, a group of students was expelled for printing and distributing the X-Ray, triggering a dramatic student protest.

In February 1912, thirty-six students attending UA formed a group called the Iconoclasts. On February 24, 1912, they printed and distributed the first issue of the X-Ray. The paper touted itself as the “Paper Without a Muzzle,” and the editors had their names printed plainly below the masthead. In the pages of their newspaper, which was printed on green paper, the Iconoclasts criticized the “indifference, incompetence, and unfairness of some professors and the rigidity of student discipline.” The X-Ray’s editors stated, “This paper has as its aim the tearing down of the old and flagrant abuse at this institution and to help her enter a new era. Many will perhaps be shocked and surprised, and if they are, we have achieved our aim.” One attack on the university’s teachers stated: “As real teachers and inspirers of men and women, we have some of the finest NEGATIVE specimens in captivity. Instead of being able to unfold a subject and make it vitally interesting, they seem to have an ingrained knack of making it repulsive and impregnable.”

Following such insults, all thirty-six Iconoclasts were expelled by President John Tillman, who cited a 1905 university policy that banned “unauthorized publications and assemblages.” The expulsion triggered a campus-wide protest.

Some Iconoclasts were baseball stars, one was captain-elect of the football team, and others were debate team members. UA student Guy Wolf, who was said to carry “a reserve supply of thunderbolts ready to be turned loose at the slightest provocation,” was an editor of the paper, as were fellow students Sam Wood and Allen Gates. Several of the Iconoclasts were from prominent families. Two Iconoclasts were sons of university trustees. Iconoclast Allen Gates was the son of David Allen Gates, a state tax commissioner. Sam Wood and Roy G. Wood were the sons of associate Arkansas Supreme Court justice Carrol Wood of Little Rock (Pulaski County). Burton S. Kinsworthy, another X-Ray editor, was the son of former state attorney general Edgar B. Kinsworthy. Tarelton T. “Toddy” Cotnam was the son of Florence Brown Cotnam, a leader in the Arkansas women’s suffrage movement. The affluent parents as well as members of the student body were outraged at the expulsions.

After the Iconoclasts were expelled, a reported 600 students protested on campus on February 27, 1912, wearing green ribbons on their coats. The students sang, chanted, and danced in the snow at Old Main before becoming part of a protest rally held by members of the UA band at UA’s Ozark Theatre. Local businesses in Fayetteville reportedly displayed green banners to show their support of the expelled students, and the movie theater offered free admission to UA students.

Soon after the protests began, Governor George Washington Donaghey, as chairman of the school’s board of trustees, became involved in the conflict. A group of student protestors met Donaghey’s train on March 2, 1912. Donaghey met with the board of trustees and the expelled students, hoping to settle the issue. The X-Ray’s editors were represented by a seven-man committee who maintained that their paper’s goal was only to improve the university. President Tillman stood by his judgement citing the 1905 law, but Governor Donaghey directed the board to inform Tillman that “the expulsions had indeed been justified by the 1905 law but that law was now repealed.”

The thirty-six were immediately reinstated, and the student body began to repair relations with the university. However, at the governor’s request, there were no celebrations after the meeting. Two days later, a formal request was filed by a student representative for extra class work to make up for any time lost due to the protests.

After the 1912 graduation ceremony, President Tillman announced his retirement. He was elected to the U.S. House of Representatives two years later, serving seven terms.

The incident was mentioned officially for the last time by the UA board of trustees in its annual report in January 1913. That report stated that “the faculty has acted with wisdom and decision. The action of the board in reinstating the students has not had the slightest effect in making faculty timid in enforcing discipline. Moreover, the students have shown a patriotic spirit in responding loyally to the progressive measures of the faculty.”

Surviving issues of the X-Ray are available for viewing and research purposes in the University of Arkansas’s Special Collections in Fayetteville. 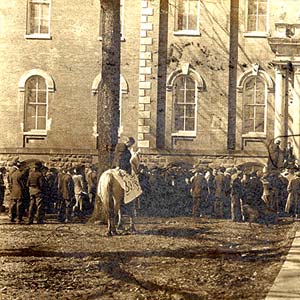