William Allen Clark was one of Arkansas’s “preacher-editors.” For nearly fifteen years, he occupied the editorial chair of one of Arkansas’s largest denominational newspapers, the old Arkansas Baptist, and was a pivotal figure in the Landmark Baptist movement within the state.

W. A. Clark was born on May 24, 1844, near Rossville, Indiana, the son of wealthy farmer David C. Clark and his wife, Mary. In 1861, he entered Simonds Select School for Boys in Indianapolis, Indiana. During the Civil War, he served as a corporal in Company K, Seventy-Second Indiana Volunteer Mounted Infantry. In 1865, he moved to Kansas, where he married Jennie C. Jordan. They had three children.

In May 1867, Clark was baptized into the Methodist Episcopal Church but soon became dissatisfied and joined the Baptist Church. In February 1872, he was licensed to preach and was ordained as a minister in April. Within a few months, he moved to Chicago, Illinois, where he studied for three years at Northwestern Baptist Theological Seminary.

In 1873, he began his ministerial work in Indiana, pastoring at Valparaiso and then at Elkhart, but chronic health problems forced him to seek a milder climate. Early in 1877, he became pastor of the Dardanelle Baptist Church in Yell County. His later pastorates included Helena (Phillips County); Hot Springs (Garland County); Sulphur Springs (Garland County); Bristol, Tennessee; and Chico and Alpino, California.

In 1878, he was elected state evangelist for the Arkansas Baptist State Convention, an office he held off and on until 1889. In 1881, he received a Doctor of Divinity degree from the University of Arkansas (UA) in Fayetteville (Washington County).

In 1889, Clark became editor of the Arkansas Baptist, the largest of several privately owned Baptist newspapers in the state. In 1891, he became owner and manager of the paper. He retained this position almost continually for a total of fifteen years. During this period, he became the undisputed leader of the state’s robust Landmark Baptist movement. Landmark Baptists place great emphasis upon the local church as the unit for any kind of cooperative denominational activity. They believe that all other organizations—such as associations, conventions, and mission boards—must be subservient to the local congregation.

Clark’s editorials untiringly defended what he called “the Bible doctrine of church independence and sovereignty.” At the same time, his opposition to the work of the Arkansas Baptist State Convention gained him the enmity of many of the state’s prominent Baptists. In 1901, he sold an interest in the paper to a younger Landmark leader, Reverend Ben M. Bogard. In 1904, faced with Jennie’s ill health, Clark retired from the paper and moved his family to Southern California, where Jennie died in 1907. That year, he married Mary Norris, and she died in a stagecoach accident the next year.

In 1909, Clark took charge of an experimental fruit farm in Sutherland Springs, Texas, near San Antonio, where he remained until 1912. In 1914, he married Ermina Ann Allison. In 1915, he brought a small farm near Sulphur Springs (Garland County), east of Hot Springs (Garland County). He pastored the Sulphur Springs Missionary Baptist Church from then until his death on June 30, 1920. He and his first wife are buried in Bellefontaine Cemetery in St. Louis, Missouri. 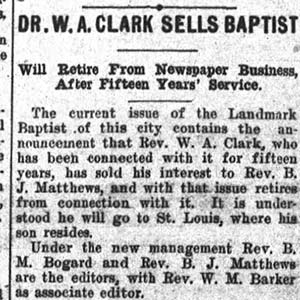 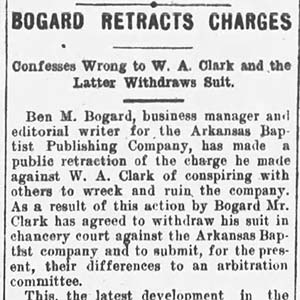