The Vernon & Moore-McIlroy Produce Warehouse is located in Fayetteville (Washington County) at 200 N. West Avenue, on the northeast corner of N. West Avenue and W. Spring Street. Built circa 1906, the warehouse is a one-story, red masonry commercial building with Italianate influences. It was listed on the National Register of Historic Places on September 10, 2020.

During the first few decades of the twentieth century, the produce industry (in particular the cultivation of apples) was the primary economic enterprise for northwestern Arkansas. With the increasing production of apples, an industrial infrastructure developed to support it. This was seen in the many types of businesses established throughout the region, which included nurseries, barrel factories, ice plants, cold storage warehouses, canning factories, evaporator companies, and distilleries, as well as wholesalers and fruit brokers who sold the apples, both locally and to distant markets. In Fayetteville, the intersection of West Avenue and Spring Street was the heart of the apple-processing industrial area of the city. The 1908 Sanborn Fire Insurance Map for Fayetteville showed all the various apple-related businesses that were near that intersection, including the Vernon & Moore-McIlroy Produce Warehouse. There was a barrel factory across Spring Street to the south; the Fayetteville Produce Company to the west of West Avenue, as well as two barrel warehouses; and the Arkansas Cold Storage & Ice Company and the Appleby Brothers Canning Company to the north of the warehouse. These businesses were located there due to proximity to the rail lines, which made shipping and receiving produce a more efficient process. However, little remains from that period in the area, and those structures that do are almost unrecognizable, aside from the Vernon & Moore-McIlroy Produce Warehouse.

Constructed around 1906, the warehouse would have been used for apple storage and produce wholesaling during the apple boom in northwestern Arkansas. Originally owned by Vernon and Moore during 1907–1908, the building was purchased in 1908 by J. H. McIlroy, a prominent local businessman and banker who owned the building until 1920. However, records show that the warehouse changed its use in 1913 from strictly an apple warehouse to a more general produce warehouse, which reflected the diversifying markets in the area. Then, in 1919, the warehouse became a wholesale flour and feed store. A year later, the building was purchased by J. T. Eason Jr., who owned the structure until 1960. From 1927 to 1928, the warehouse was home to the O’Leary Produce Company. The south-side loading dock and dock door were most likely installed on the building during this time. This alteration changed the address of the building from 200 N. West Street to 410 W. Spring Street, which would remain the address until the 1990s. In 1929, it became the Williams Produce Company, which remained in the structure until 1941, when it became home to the E. V. Byrd Construction Company. Over the following decades, the warehouse housed at least five other businesses, two of which were produce related. In 1988, the City of Fayetteville purchased the building, as well as the adjacent structure, and continues to own it in the twenty-first century.

The warehouse is rectangular with a low basement and shallow, sloped roof hidden behind a low parapet. It shares a party wall with the building at 220 N. West Avenue on the north side. The building has a fieldstone foundation, which is visible on the west and south elevations. The walls of the building are constructed of triple-wythe brick courses, which rise from the fieldstone foundation and extend to the top of the parapet. Wood windows and doorways with shallow, arched brick window hoods, which reflect the Italianate Style of the period, penetrate the masonry walls on the west and south elevations. Inside, a post-and-beam structure supports the roof, allowing the warehouse to have an open floor plan. The 2″ x 6″ tongue-and-groove floor covers sturdy joists intended to support the weight of stored cargo.

The biggest change to the warehouse itself was the addition of a building next door, which occurred in about 1930. Notable changes to the building’s exterior include the painting of most of the decorative brick window and door hoods, the filling in of all of the basement/crawlspace windows, the filling in of the east façade windows, the installation of a new standing-seam metal roof, and the installation of a large vent over the rear doorway. By 2020, the building was being used for storage. 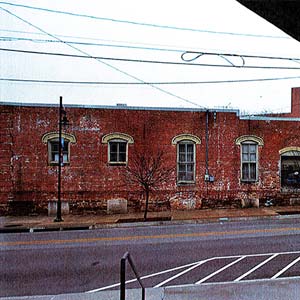 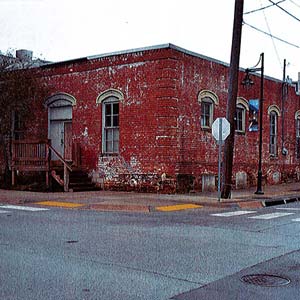 Rear and Side View 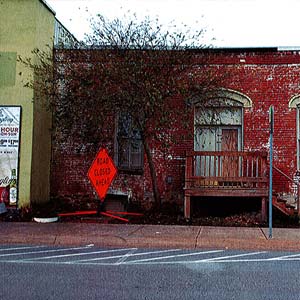 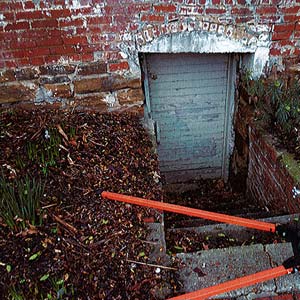 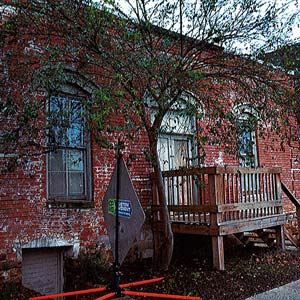 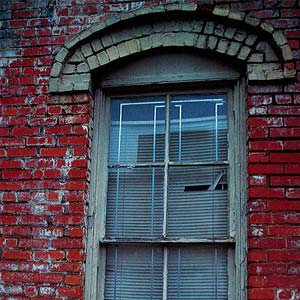