What became the University of Arkansas Rich Mountain (UA Rich Mountain) in 2017 is a public, two-year comprehensive community college located in Mena (Polk County). Its service area includes Polk, Scott, and Montgomery counties as well as portions of Sevier County and LeFlore County, Oklahoma. The college, known at that time as Rich Mountain Community College, was accredited in 1990 through the North Central Association for Colleges and Universities.

The college was funded by the Arkansas General Assembly in 1973 under the auspices of the Arkansas Department of Vocational Education. The first classes began in the fall of 1975. At the time, the campus consisted of a single vocational-technical building. In 1983, the Arkansas legislature approved combining Rich Mountain Vocational-Technical School with Henderson State University’s off-campus program in Mena to form Rich Mountain Community College (RMCC). Enrollment at that time was approximately 250. An instructional building was added in 1986. In 1992, a student services building was added to the campus, and three years later, the college’s St. John Library was expanded.

Dr. Mary Louise Spencer served from 1973 to 1987 as RMCC’s first director. She was succeeded by Bill Abernathy. From 2000 to 2008, Dr. Janet Smith served as president. Smith was instrumental in emphasizing the use of instructional technology, increasing educational opportunities for local residents, and instituting a building program that will expand the student center, library, and other facilities. In 2008, Dr. Wayne Hatcher became the school’s fourth president, though he left three years later for a job at Black River Technical College.

UA Rich Mountain offers the following degrees: Associate of Arts, Associate of General Studies, Associate of Applied Sciences, and Associate of Applied Science in General Technology. A teaching emphasis is available for the Associate of Arts degree. In addition, students can earn technical certificates in various aspects of computer operations, office technology, machine tools, and practical nursing. The college offers distance-learning options, including telecourses, interactive televised courses (ITV), and online courses. Financial support for students includes single-parent scholarships and funding from the college foundation. The college operates tutoring centers to assist students with learning disabilities and those seeking to develop their academic skills.

UA Rich Mountain maintains education centers in Waldron (Scott County) and Mount Ida (Montgomery County). Students can earn an Associate of Arts degree entirely at the Waldron Center. In addition, courses are offered at several other off-campus sites in Wickes (Polk County) and Oden (Montgomery County). The college offers “60 Plus,” workforce education, and community service programs. In addition, English as a second language (ESL) programs are offered to serve the rapidly expanding multicultural population of the college’s service area. The majority of students are non-traditional; however, traditional students are well represented in the student population.

UA Rich Mountain maintains a television station and a radio station that serve the dual purposes of servicing the community and offering courses aimed at developing proficiency in both types of media; the station broadcasts on cable channels 19 and 27 in Polk County. Programs include coverage of community events and local sports, public service information, and coverage of college activities. KRMN-LP 101.1 FM is operated by students and community members and offers various types of music as well as community-based programming. Additional programming includes the old time radio program Lum and Abner.

On April 27, 2016, the college’s board of trustees voted to join the University of Arkansas System, and it formally joined the system in February 2017. 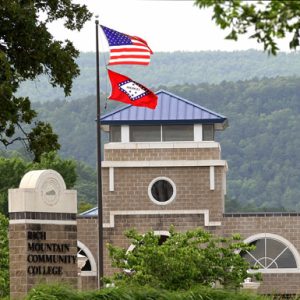