The Fifty-fifth General Hospital, “the Underground Hospital,” at Robinson Maneuver Training Center in Pulaski County was activated on May 25, 1943, during the United States’ involvement in World War II. Documents relating to the hospital were declassified on September 27, 1958; these stated that the Underground Hospital was the brainchild of then commanding officer Lieutenant Colonel Charles Chute Gill of the United States Army Medical Corps. Prior to other modern medical ventures, such as the Mobile Army Surgical Hospital (MASH) units implemented during the Korean War, the Underground Hospital experiment sought to simulate battle conditions and assess the potential for providing protected medical care at or near the frontlines.

Gill, a graduate of the Medical School at the University of California, assumed command at Camp Joseph T. Robinson in April 1943 with the purpose of activating and organizing the Fifty-fifth General Hospital. His more than ten years of military and medical training led to the conception of the Underground Hospital, the design of which was influenced by the type of combat during World War I. It was hoped that this trial would provide the needed experience in creating a practical sheltered medical facility in a theater of war. Additionally, the enterprise primed soldiers for the kind of medical care they might receive if wounded or stationed within various types of overseas hospitals.

According to declassified documentation, each member of the hospital staff took part in the construction. It was carved from the sandstone bedrock in the slope of a small hill on the hospital grounds, complete with wooden floors, ceilings, and walls; it was wired for electricity, and plumbing provided potable water. The complex was excavated out of an area of approximately 800 cubic yards, and each passage, seven to nine feet high with a three-foot layer of rock and earth on the roof for protection, made it near flush with the extant hillside. With the exception of some drilling and rock detonation by post engineers, the effort was completed manually by the hospital staff using scraps and abandoned materials.

The hospital was composed of three rooms, each approximately thirty feet long and fifteen feet wide; the first was for receiving and dressing, the second for minor surgery (with a darkroom for x-ray development), and the third for general surgery. Each room was connected by interior passageways and possessed ventilators that doubled as emergency escape hatches. The three entrances to the structure were staggered in design, preventing small-arms fire from penetrating the interior of the complex. Tests conducted using grenades and 50-caliber small arms through the ventilators and entryways resulted in minimal damage, attesting to the effective design of the structure. Additionally, the structure was camouflaged into the surrounding landscape using local vegetation and terrain.

Other examples of underground hospitals during the World War II period are primarily in the style of mineshafts cut into mountainsides, such as the Nazi hospitals of Jersey Island and the Mount Isa hospital in Australia. Other examples of underground hospitals exist in various forms, such as the Cu Chi Tunnels of the Vietnam conflict and, more recently, the Western Galilee Hospital in Israel, which was used during clashes between Israel and Hezbollah in 2006.

The Fifty-fifth General Hospital was not a mineshaft, tunnel, or traditional concrete bunker but instead an improvised mound of readily available material, making it a unique design.

The Fifty-fifth General Hospital was deactivated and the raw material sold at the end of World War II. Today, its collapsed remnants remain. Detailed mapping with a total station and an archaeological survey are on file with the Cultural Resource Management office of the Arkansas Army National Guard. Although the hospital was never utilized in the field, it was considered a successful experiment. The structural design of this impromptu fortified front-line medical facility is one of a kind. The site of the former experiment is determined potentially eligible for the National Register of Historic Places.

My father, Sgt. Carlos H. Sparks, trained at Camp Joseph T. Robinson and served under the leadership of Colonel Gill and left in 1944 to go England to be a part of the Wood Farm U.S. Army Hospitals in Malvern, Worcestershire, 1943-1945. 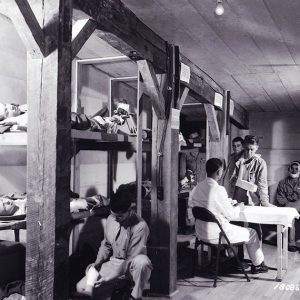 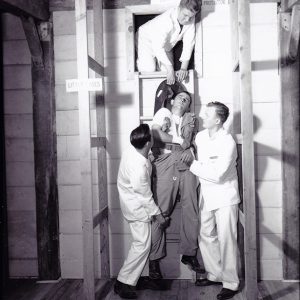