Stephen Brundidge Jr. was a prosecuting attorney, a member of the Democratic State Central Committee, and a six-term U.S. Representative for the Sixth and Second Congressional districts.

Born on January 1, 1857, in Searcy (White County), Brundidge was the fourth child of Stephen and Minerva Brundidge, who moved to Searcy from Mississippi in 1853. His father was a contractor who built the first brick buildings in Searcy, including the main section of the present White County Courthouse, built in 1869. Brundidge graduated with honors from the Searcy Male and Female Academy. He then read law in the offices of William R. Coody and Dandridge McRae and was admitted to the bar in 1879. He first practiced law in Jacksonport (Jackson County) as a representative of the Coody and McRae firm.

In 1881, Brundidge married Nellie Margurite Morris of Jacksonport. They had four children, two of whom survived to adulthood.

In 1886, he was elected prosecuting attorney of the first judicial district of Arkansas, being reelected to a second term in 1888. He then served on the Democratic State Central Committee from 1890 to 1892 while continuing his law practice.

In 1896, he was elected the Sixth District representative to the U.S. Congress. He served the Sixth District for three terms. Due to redistricting, he represented the Second District for three additional terms starting in 1903. As a member of the Appropriations Committee, Brundidge fought to reduce tariff duties and worked for appropriation to prevent flooding and improve navigation on the White River. Through his efforts, the locks and dams were built on the White River near Batesville (Independence County). He also worked to build court and public buildings in Batesville, Harrison (Boone County), Bentonville (Benton County), and Searcy, as well as establish the Mammoth Spring National Fish Hatchery at Mammoth Spring (Fulton County). Brundidge chose not to run for a seventh term in 1908.

In 1912, Brundidge challenged U.S. Senator Jeff Davis in the Democratic Party primary, losing in a surprisingly close race. Following the death of Davis in 1913, he was again a candidate for the Senate position; however, the Arkansas legislature elected Governor Joseph T. Robinson to the seat, leading to a special election to fill the office of governor. Candidates in the Democratic primary included Brundidge, Charles Hillman Brough, and George Washington Hays. Hays had the support of the remnants of the Jeff Davis political machine, which controlled the St. Francis Levee District Board and dominated politics in the Arkansas Delta. The contest was extremely close. The Phillips County Election Commission delayed reporting until all the other county reports were in, at which point it reported enough votes to elect Hays. Brundidge took the evidence of fraud to the Democratic State Committee, which rejected his contention. The Chancery Court intervened for Brundidge; however, a split Arkansas Supreme Court, in a decision written by Hays ally Judge William F. Kirby, declared that political rights could not be enforced by the courts.

Starting in 1907, Brundidge established a law co-partnership with his nephew Harry Neely, which continued until Brundidge’s death on January 14, 1938, at his home. He is buried in Oak Grove Cemetery in Searcy. 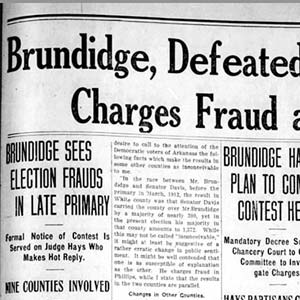