St. Charles, a town in Arkansas County, is located on a bluff over the White River. The most destructive single shot in the Civil War was fired at St. Charles.

Louisiana Purchase through Early Statehood
Pierre Pertuis, fur trader, arrived after purchasing a 1797 Spanish land grant. By 1839, Charles W. Belknap owned the site, known briefly as Belknap’s Bluff. He built an adobe house, one of only a few found on the Arkansas frontier. The house served as a hospital for both sides in the Civil War and was a longtime landmark. The name St. Charles first appears with Belknap’s appointment as postmaster in 1850. He platted the town and began selling lots. St. Charles flourished during the 1850s with the shipping of various products on the river.

Civil War through the Gilded Age
The Engagement at St. Charles was fought in June 1862 when a Federal naval flotilla approached the town. A shot fired by a Confederate cannon hit the steam drum of the USS Mound City, killing most of the sailors on board, in the most destructive single shot of the war. The town was mostly destroyed in the battle. A unique memorial to both sides’ dead, which still stands today, was erected by a sailor’s descendant.

St. Charles suffered like other Southern communities after the Civil War. The town’s incorporation was in 1880. Until railroads came, it was an important port. Most commerce of inland communities passed through the town, until rails reached DeWitt (Arkansas County), after which St. Charles began declining. For many years, its economy depended on timber, fishing, hunting, trapping, mussels for the button industry, and crops. A school district opened in 1891, with the first commencement exercise in Arkansas County occurring in 1892.

Early Twentieth Century
In spring of 1904, a succession of white mobs terrorized the black population of St. Charles, murdering thirteen black citizens. This may have been the deadliest lynching in American history.

A Civilian Conservation Corps (CCC) camp was established at St. Charles in July 1935 to develop a federal wildlife refuge along the lower White River. The facility included stationary and floating camps. Young men of the CCC cleared streams and built access roads, bridges, boats, offices, dwellings, and a sawmill. The camp doctor, Corydon M. Wassell, was awarded a Navy Cross in World War II for saving twelve comrades on Java and, after recognition by President Franklin Roosevelt in a radio speech, was portrayed in the 1944 film The Story of Dr. Wassell. The White River National Wildlife Refuge was established in September 1935 and includes 160,000 acres and large concentrations of migratory waterfowl. Two-thirds of Arkansas’s bird species are also represented in the refuge. Countless other animal and plant species abound. More than 300 lakes dot the refuge, intertwined by miles of trails. The refuge has more than 500,000 visitors yearly.

World War II through the Modern Era
A brick school was built in 1942, with a new elementary school and gym added in 1958. The town was linked to the east by the completion of State Highway 1 and the opening of a ferry in 1955. Access was improved in 1982 with a highway bridge. Recent years brought a return of river transportation, making today’s St. Charles a shipping point for soybeans and grain. In 2003, the wildlife refuge opened a visitor center. Situated in the center of the refuge, St. Charles enjoys its reputation as a sportsman’s paradise for fishing and hunting. Several hunting lodges and homes accommodate the influx of sportsmen. Retirees also have found the community attractive. A museum interpreting the town’s history is located next to the volunteer fire department. 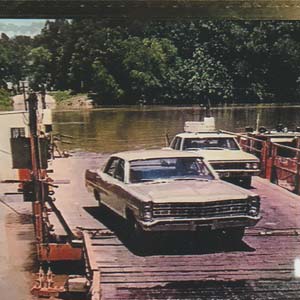