Civic leaders in Springdale (Washington County) established the Springdale College Company on June 22, 1895, by filing articles of incorporation in Washington County. Forty-eight people committed to purchase two shares each, at $25.00 per share, to create the initial capital for the venture. In November 1895, the corporation purchased a building and land from the Salem Evangelical Lutheran Congregation of Springdale to provide a college facility. The building had previously housed a common school for six grades, operated initially by the Baptists from 1871 and from 1885 by the Lutherans. After organizational delays, October 4, 1897, was finally set for the opening of the college. However, the educator selected to lead the college—Professor Charles Parsons of Webster, South Dakota—failed to appear in Springdale by that date. Touring speaker Josiah Hazen Shinn, former state superintendent of public instruction, impressed the organizers during a visit to lecture at the Springdale Opera House on October 30, 1897, and the organizers began negotiations with him to lead the college. By January 1898, the board donated its stock to Professor Shinn in exchange for his promise to maintain a high school, establish a nonsectarian college, and assume the indebtedness against the property.

One week after accepting control of the college company, Shinn announced the opening of the Academy of Springdale on February 1, 1898. The first term, the academy offered a Pre-Preparatory Department and a Preparatory Department designed to prepare students for admission to college, and specifically designed to meet the entrance requirements of the University of Arkansas (UA) in Fayetteville (Washington County). The cost was $10.00 per term with algebra, Latin, higher arithmetic, rhetoric, general history, physics, botany, and physiology being offered by a faculty of five, including Professor Shinn and Clara Darsie of Little Rock (Pulaski County). Scholars boarded with private families in Springdale for $7.50 to $12.00 per month. The school opened with twenty-five students.

In the announcement for the second year, the name of the institution was changed from the Academy of Springdale to the Springdale College. A collegiate department was established with tuition of $175.00, which included board and washing, or $50.00 without board. By 1899, the Springdale College offered students five options: 1) a collegiate course of three years, 2) an academic course of three years, 3) a professional course of two years, 4) a musical course of six years, and 5) a course of physical culture of four years. The college expanded to a faculty of six, including Shinn and his wife, Mildred, and sixty students by 1900.

At the college, Shinn also coordinated a normal school for the training of teachers for public schools in the summer months between academic sessions, and a tent Chautauqua each summer, which consisted of a two- to three-week session featuring inspirational and informative statewide and nationally known speakers. The highlight of the Chautauqua sessions occurred on July 24, 1899, when William Jennings Bryan delivered two speeches to an estimated 10,000 people on the grounds of the Springdale College. At the time, the population of city was about 1,250 people.

The college produced its first ten graduates in 1901, but it became clear that the prodigious efforts involved in operating the college and related activities were not a financial success. The Shinn family abandoned the efforts after the summer Chautauqua. The property of the college was foreclosed for debt later that year. Millard Berry, one of the original organizers of the college and father of two of the college’s graduates, was also a public school board member and he purchased the property in 1902. It later became the site of the first free public high school in Springdale. While the college building was demolished in 1910, the property is still owned by the Springdale Public School District, and a new building on the property is being used for administrative offices as of 2012.

Education, Higher
Post-Reconstruction through the Gilded Age, 1875 through 1900 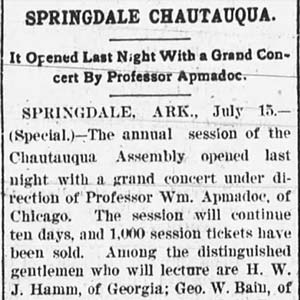 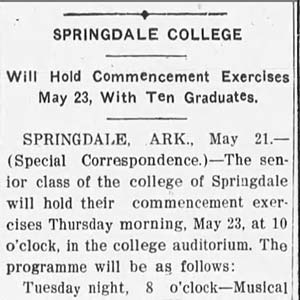