In the Ozarks of Arkansas and Missouri, the Snawfus is a mythological creature of regional folklore. Described as an all-white, deer-like creature, but much larger, the Snawfus is usually reported to have plum or dogwood branches in full bloom growing from its head instead of antlers.

Most of what is known about the Snawfus was collected and recorded by the folklorist Vance Randolph, who related the various stories he heard about the creature in the animals and plants chapter of his book, We Always Lie to Strangers: Tall Tales from the Ozarks.

The blue haze that hangs over the Ozark Mountains in the fall and winter is attributed to the exhalations of the Snawfus, which is believed to emit spirals of blue smoke when it breathes; the smoke then spreads and settles over the mountains. The creature is also said to have the ability to fly and leap into the trees.

In a tall tale on the origins of the creature, the Snawfus was said to have been captured by an orchardist, who grafted Arkansas black apple scions onto its antlers. In another story, a pioneer hunting in the woods ran out of bullets and decided to use plum pits instead. After the hunter fired at an albino deer and hit it in the head, the deer nonetheless got up and ran away, and the hunter later heard stories of a white buck with plum trees growing from its head instead of antlers. Seeing an albino deer is considered a bad omen in the Ozarks, and Ozarkers warn that coming across the Snawfus is a sign of imminent death. 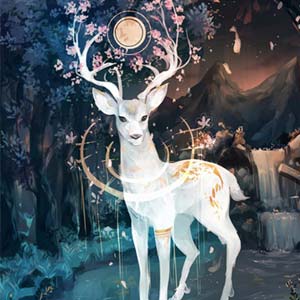