In August 1882, an African-American man known only as Smith in published newspaper reports became the second man ever to be lynched in Pulaski County, according to available records. Jim Sanders had been lynched earlier that year in the county.

In part because the victim was named only as “Smith” in published accounts, little information can be gleaned regarding his actual identity. Nothing was reported of the event in the Arkansas Gazette, and most reports that circulated nationally fell along the lines of this bare-bones account published in the Highland Weekly News of Highland County, Ohio: “Smith, who assaulted a white lady near Little Rock, Arkansas, was lynched by a disguised party who shot him to death.” The National Republican of Washington DC managed to add a little more information, specifically describing Smith as “colored” and his crime as an attempt “to outrage a white lady.”

While some lynchings were reported in the newspapers in great detail, including follow-up articles and even editorials regarding the events, others elicited very little attention whatsoever; others still likely went unreported. Thus, the lynching of Smith, if nothing else, showcases the difficulties in producing an accurate assessment of racial violence, especially for the nineteenth century in the United States. 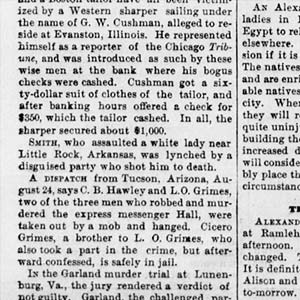